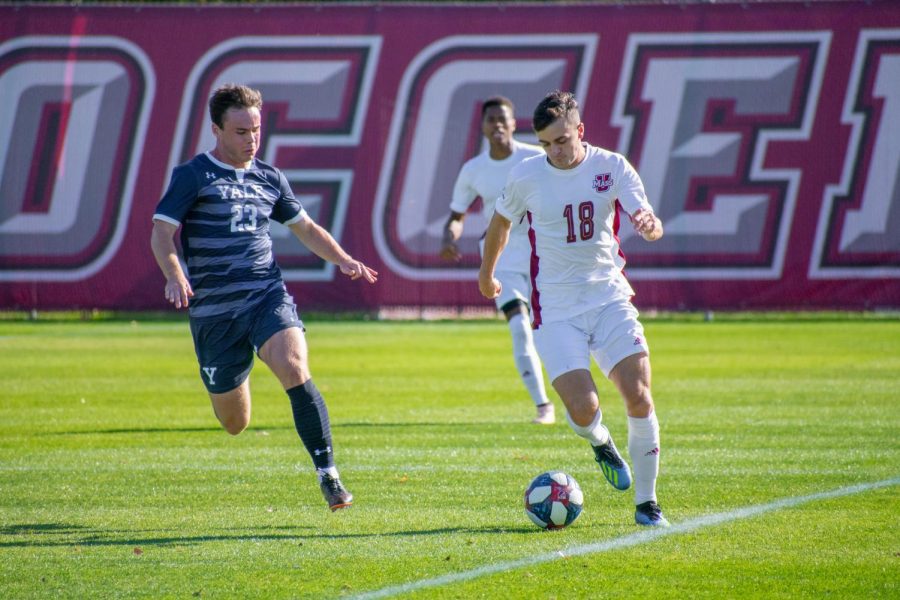 With its back against the wall on Saturday night, the Massachusetts men’s soccer team kept its playoff hopes alive with a huge Atlantic 10 win against La Salle.

With a 2-1 lead at the beginning of the second half, the Minutemen (6-10, 2-5 A-10) were looking to give themselves some breathing room in a crucial moment. Midfielder Christian Labeck came through with his second score of the day off an assist from freshman midfielder Evan Fournier. Both players have provided a huge spark for the UMass offense of late.

Labeck scored his first goal of the game on a penalty kick shortly prior, in the 54th minute of the game. The senior gave the Minutemen just the boost they’ve needed all season in the scoring department.

“He has come in and cemented his place in the starting lineup,” coach Fran O’Leary said. “We’ve been crying out for goals, and it was huge for us to get those two from him in this one.”

Despite the two second-half goals, it took a big effort for the Minutemen to hang on. With a 3-1 score in the 78th minute of the match, sophomore forward Nigel Buckley broke through for La Salle (7-8-1, 3-4-0) and cut the deficit to a single goal. UMass had two shots compared to the Explorers’ seven in the second half. However, the Minutemen’s ability to finally start capitalizing on opportunities allowed them to escape with the win.

“We took some chances tonight,” O’Leary said. “We’ve been in most of the games we’ve played, but we created a lot chances and were able to take advantage of them tonight.”

The first half of the match was a battle, with both teams getting a number of high-quality chances. The Minutemen had 10 total shots to La Salle’s nine in the first 45 minutes, while each team put five of its shots on goal.

It was also an important match for freshman forward Quinn Serafino, who gave UMass an early lead with a goal in the sixth minute of the match, his second goal of the season, and the Minutemen hope to see him build off of this performance as one of their main building blocks going forward.

“Strikers want goals, and he’s had some unfortunate ones called back,” O’Leary said. “He could’ve doubled his goal total on the season. He’s a tireless worker with a strong mentality and very unselfish play. We’re delighted that he finally got himself another one.”

The only other goal scored by La Salle came in the 41st minute of the match, as sophomore forward Ike Hollinger tied the match at a goal apiece. The Explorers were unable to get much momentum going until it became too little, too late.

The Minutemen currently find themselves just outside of the playoff picture. The four teams ahead of them are all knotted up for their eighth and final playoff spot with nine points each. UMass currently has six as it clings to its outside chance heading into next week’s match.

“We’re still alive and we need to win,” O’Leary said. “We need goals and we’ll work on finishing. One point won’t be enough, but three points very well may be. We need to fight for them.”

The Minutemen will play their final game of the regular season at Rudd Field next Saturday in an A-10 match against Saint Joseph’s.

Richard Rodgers can be reached by email at [email protected] and followed on Twitter @RichardDRodgers.