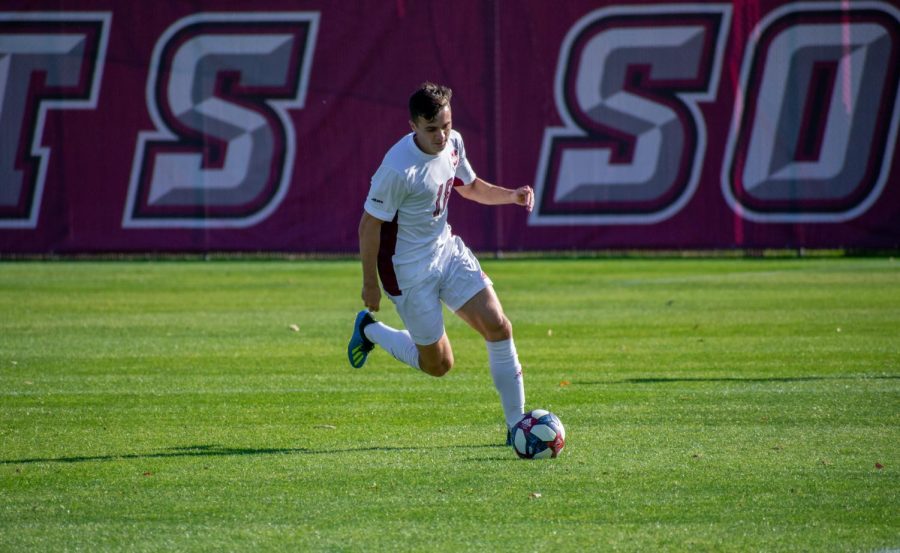 With a matchup against Rhode Island coming up on Wednesday, the Massachusetts men’s soccer team is looking to keep its emotions in check following a double-overtime win over Duquesne.

The Minutemen (5-9, 1-4 Atlantic 10) will need all of the momentum they can muster when the Rams (9-3-2, 5-1 A-10) come to Amherst for the mid-week matchup. The defending A-10 champions currently sit atop the conference, coming off a 2-1 win over Virginia Commonwealth.

As a result of the double-overtime thriller that was decided on a late header from defender Graham Brenner, UMass captured its first win in eight games. The pair of goals in the 2-1 win were both scored by Brenner, marking the first Minutemen goals scored in the last seven games.

The goals bring Brenner’s season total to five, making him the leading goal-scorer on the team.

For a central defender, that is rare.

“Graham has a knack,” coach Fran O’Leary said. “He has a terrific ability to find the ball in the box and he kept our season alive regarding conference play.”

The Duquesne game also showed how successful the Minutemen can be with their new 4-5-1 formation. The three central midfielders continued to link up with each other and progressed the ball up the field with ease. The combinations they created with their passing made the transition and counterattack better and easier, and the result of the game showed that.

“I think it has helped us out a lot,” Fournier said. “It gives us an extra outlet to try and pass the ball and also frees up whoever is in the middle, so we have a little more space. It also makes that triangle and we’re able to pass and maybe find the wide guys. It allows us to get that one extra pass in, so we can get forward and get numbers in the box.”

The formation change has also made the defender’s lives a little bit easier. The Minutemen were already solid on defense, allowing just under a goal per game, but the switch provides more options for the transition from the defensive line to the midfield, something UMass struggled with doing consistently before.

“I feel like there’s just more options on the ball,” Brenner said. “It’s easier for the back four to have an extra person to pass the ball to. Three options is better than two.”

Another key element to UMass’ win at Duquesne was its execution on set pieces, something the Minutemen talked about after practice leading up to the game. The Minutemen almost scored on a free-kick header prior to Brenner’s first goal of the match and the winner came off a free-kick.

Fournier has been the one tasked with taking free kicks and corner kicks since his insertion into the starting unit. On Saturday, he excelled in that role. His continued execution within the set pieces will be critical to UMass pulling out a positive result against the Rams on Wednesday.

“It feels really good knowing that coach and my teammates have that confidence in me,” Fournier said. “I’ve always known that I could take good free-kicks, corners and such but to have coach let me take them feels good and I think we’re going to have a lot of chances coming up, so I’ll be ready.”

Kickoff against Rhode Island is set for 2 p.m. on Wednesday at Rudd Field.

Javier Melo can be reached by email at [email protected] and on Twitter @JMeloSports.