The Minutemen surrender the lone goal in the 85th minute 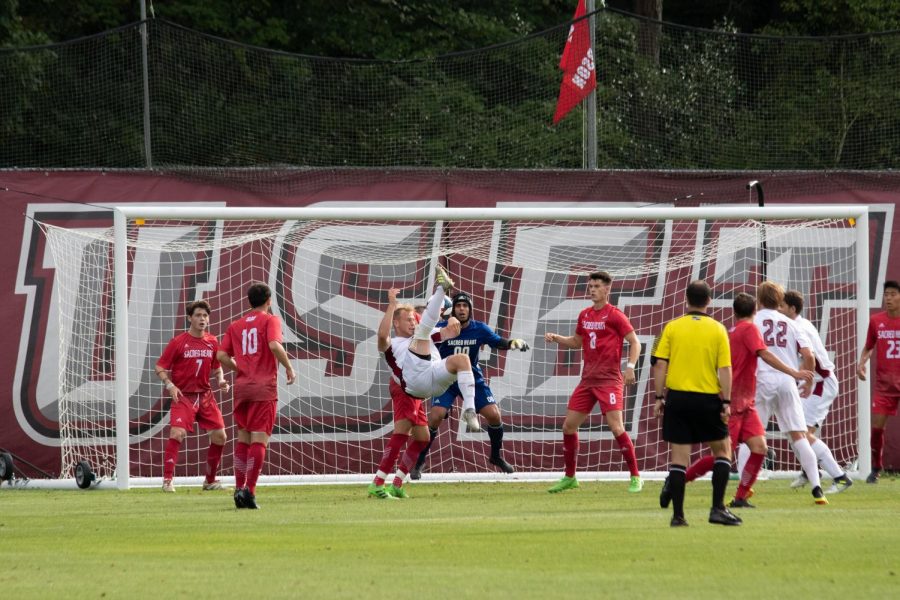 In a back and forth affair, it was senior midfielder Jaylen Thompson who scored the lone goal for Davidson in the 85th minute, sending the Massachusetts men’s soccer team to its sixth consecutive defeat.

As time really started to dwindle nearing the 80-minute mark, UMass (4-7-0, 0-3-0 Atlantic 10) decided to go aggressive on the front end of the pitch to try and push for a late goal. The Minutemen made some noise, but couldn’t put a shot on net. Davidson (2-6-2, 1-2-0 A-10) went on the counter attack with most of its players towards the front end, and Thompson came through with a goal that rattled off the post twice.

UMass continued its aggressive game plan, creating some close chances in the final minutes, but the Wildcats hung on. The Minutemen have not scored a goal in their last five games and are winless in their last six.

“I feel for our guys. I thought we were very competitive,” coach Fran O’Leary said. “We were pushing for the win and got down on the counter attack, they hit the post twice and it went off the back of the net. They gave a competitive effort on the road and created chances.”

The second half told a very similar story to the first until those final 10 minutes, when the defense finally broke down.

The main problem for the Minutemen remains the same, as they just can’t seem to find the back of the net despite all of the chances that they create. As far as chances go, UMass was right on par with Davidson. The Minutemen were only outshot 10-8, a solid statistic against a conference opponent on the road. Unfortunately, it’s their level of composure in front of the net that needs improvement.

The Minutemen are also looking to improve defensively after their stellar start to the season on the back end. They haven’t posted a clean sheet since their 6-0 victory against Central Connecticut State on Sept. 14. They’ll be looking to get back to their high defensive standards down the stretch.

At this point, it’s undoubtedly going to be an uphill battle for the Minutemen as they stare down the final six regular-season games with a 4-7 record. They’ve been through a lot this season, with brutal injuries throwing them for a loop. Resiliency will be key going forward along with the team’s veteran leadership, as UMass likely only has room for one more loss if it’s going to have a shot at making the playoffs.

“We’ve got good guys,” O’Leary said. “It’s a fine line and we’ve got to push ourselves across the line. There’s a lot of soccer left and the caliber of our guys gives me a lot of hope. Our guys have maintained a positive mentality. We have to win four more to make the playoffs.”

With just under a month left on the schedule, the Minutemen still control their own destiny.

UMass continues A-10 play back at home on Saturday at 1 p.m. against Fordham.

Richard Rodgers can be reached at [email protected] or followed on Twitter @RichardDRodgers.