Minutemen are six points from the eighth spot in the standings 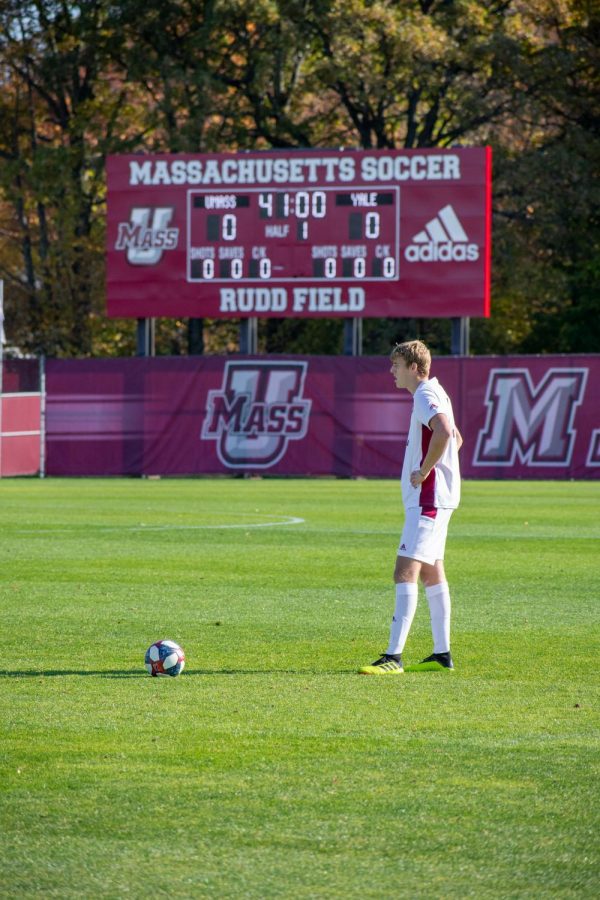 The clock is ticking for the Massachusetts men’s soccer team as it travels to Duquesne for the first of its four remaining games of the season.

The Minutemen (4-9-0, 0-4 Atlantic 10) are on an eight-game losing streak. UMass currently sits six points behind La Salle, the eight-seed, while Duquesne (8-4-1, 3-1 A-10) holds the four-seed. If the Minutemen want a shot that the conference tournament, a win at Duquesne is a must.

“Big game for us,” coach Fran O’Leary said. “They’re doing well, I think they’re 3-1 in the league. It’s a very difficult place to go and get a result but we’ll just build on what was a positive performance against Yale, and hopefully we’ll get a little bit of luck and come away with three points, which we badly need.”

The Minutemen are coming off of a strong performance against No. 24 Yale that saw them lose 1-0 in extra time on a deflected shot from outside the box. UMass played well throughout the game, and while they came away with a loss and no goals, the Minutemen fought valiantly against a top-ranked opponent and for stretches of the game looked like the better team.

UMass had to switch up its usual formation against Yale. The Bulldogs used three midfielders and that would’ve caused a big problem in the middle of the field for the Minutemen, who only use two midfielders at a time.

In order to counter what Yale was coming out with, the Minutemen switched from their usual 4-4-2 formation to a 4-2-3-1 formation, removing one of their strikers from the game and replacing him with an attacking midfielder in Ryan Levay. The result was that UMass was able to generate more forward progress and create more attacking opportunities in the final third.

“I thought the change was a good decision,” senior Christian Labeck said. “Especially against a Yale team that has three center mids, we needed to drop Levay back in to help with whoever was playing in the midfield with Evan Fournier. It definitely created a bunch of opportunities and a lot of space out wide and I tried to take advantage of that.”

Duquesne plays on a turf field, something that makes the game very difficult due to the way the ball rapidly slides on the ground. The Minutemen will have to play the ball through the air in order to pull out a result but it is something that they are familiar with, having played that exact style of game against Yale on Tuesday.

“In the beginning of the year, we were great at set pieces,” freshman Quinn Serafino said. “We scored on set pieces against Central Connecticut, scored on a set piece at Northeastern and we scored off a set piece in the preseason against Hartford. Those games were on turf. We went over set pieces in practice and it’s really important that we start scoring on them again because we’re on a big goal-scoring drought and an easy way to maybe open up the floodgates in off a set piece.”

The gameplan is set, but UMass needs to start executing. The Yale game marked seven straight games without scoring a goal. The last UMass goal came a month ago against Bryant. The defense has been stellar at keeping things close, but the attacking unit needs to find the back of the net or else the season could be over for the Minutemen.

With only four games remaining on the schedule and zero points so far in the conference, UMass needs to pick up as many points as it can in order to contend for a playoff spot. The Minutemen haven’t missed the playoffs in five years and aren’t looking to be the group that breaks that streak.

“I think it means a lot to all of us,” O’Leary said. “You can see the way our guys are playing ― the effort they give and the commitment with the performance the other day [against Yale] ― that there’s still an excitement and an energy. We’re not looking at 12 points right now, we’re looking at three points. We need three points against Duquesne. Then we’ll keep going from there.”