The Minutemen are currently six points out of the eighth spot 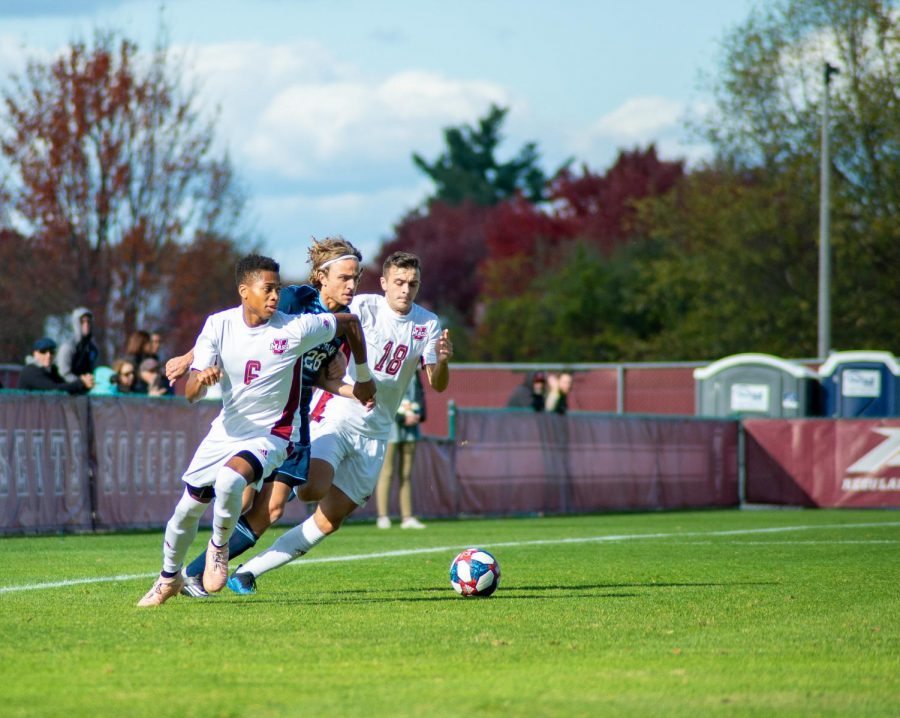 It’s crunch time for the Massachusetts men’s soccer team, which is on the brink of being eliminated from the Atlantic 10 Tournament.

The Minutemen (5-10, 1-5 A-10) have two games remaining: Saturday at La Salle and next Saturday at home against Saint Joseph’s. La Salle currently sits in the seventh spot in the conference with nine points following a 2-0 win over George Mason. The eighth spot is occupied by George Washington, which also has nine points. The Minutemen currently own three points in the conference but have a chance to potentially slide into the eighth spot if they win their two remaining games and GW and La Salle both lose their final two games.

The current position is similar to the one held by UMass last season. The Minutemen finished tied for the last spot with three other teams and it took all the way to a seventh tie-breaker for the Minutemen to punch their ticket to the Atlantic 10 Tournament.

“We were in a similar position last year where there were a lot of teams that might get in,” senior Ryan Saul said. “We’re still alive, so we need three points to make sure that the last game next Saturday against Saint Joseph’s means something. That’s our goal right now. We need three points. We need a win.”

The Explorers (7-7-1, 3-3 A-10) are in the driver’s seat when the two teams meet. With their position in the conference tournament pretty safe at this point in time, the gameplan will be to possess the ball and try to just get extra points against UMass.

The Minutemen will be playing on a turf field, something they are rather successful playing on. Their recent game against Duquesne was on a turf field, so they are no strangers to the setting. The gameplan, however, won’t be like most games. Since things get unpredictable on turf, the Minutemen will have to play a more conservative style in order to pull out a result against La Salle.

As has been the story of the season so far, injuries flared up again. Junior midfielder Eli Cronin was an injury scratch in the loss to Rhode Island due to knee pain, only adding to the lengthy list of players that the Minutemen have lost this season. The focus will be on regrouping and continuing to strive for success on the field to close the season.

“We have a few guys out with injuries so we’re trying to get people acquainted if they’re playing a new position and get everyone ready to play with each other,” Saul said. “That’s the main thing is making sure that we all know where we’re supposed to be on the field because jobs change every day.”

At this time of the season, it’s easy for younger players to start feeling the pressures of life as a student-athlete. With only two seniors on the roster, the Minutemen are full of freshmen and sophomores who are still adjusting to attending practice and games on top of their responsibilities in the classroom. Saul and fellow senior Christian Labeck have been making sure to make the younger players feel comfortable and able to deal with the stresses they are facing.

“When everyone gets here for preseason, we have two weeks where it’s just soccer so everything is all fun,” Saul said. “Then, this time of year, classes start to roll around, midterms start to come around and people are starting to get sick. It can be very stressful for a lot of the young guys but for Christian and I, we’ve been through it for four years, so we know it’s going to start to get tougher, so we’ll have to stay on top of everyone to make sure they’re taking care of the little things and doing stuff outside of soccer so they can come in and work hard during practice and on the field during games.”

Kick-off is set for 7 p.m. on Saturday at La Salle.