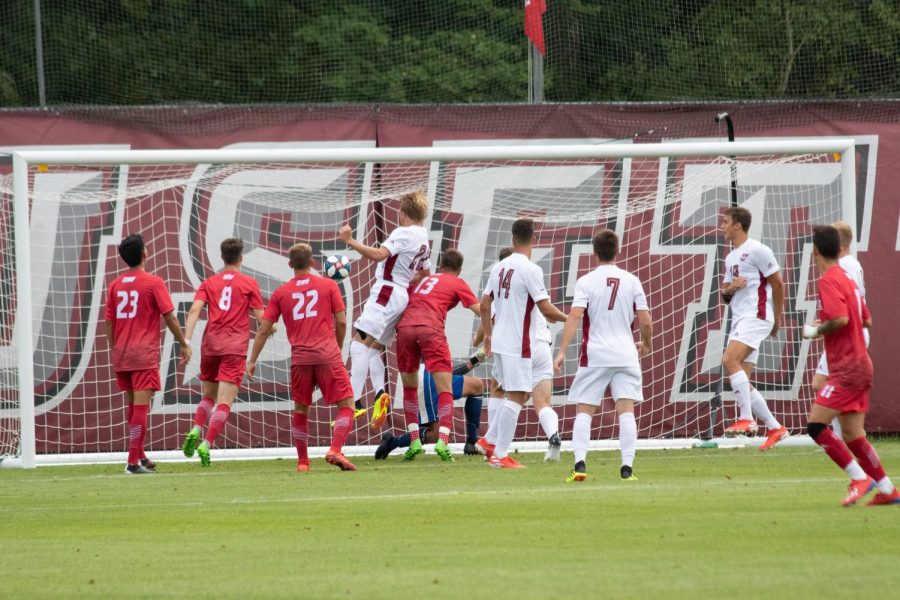 The Massachusetts men’s soccer team hung tough against Saint Louis for most of the match, but missed several great opportunities and saw the Billikens pull away in a 2-0 loss.

After a slow start for both teams, Saint Louis (6-3-0, 3-0-0 Atlantic 10) eventually started to find a rhythm and create chances. Defender Jacob Goyen was inches away from a goal midway through the first half, but got denied on a diving save from UMass (4-6-0, 0-2 A-10) goalkeeper Marvyn Dorchin along with a nice clear by defender Ryan Saul.

The Billikens finally struck first on an errant pass that turned into a two-on-one opportunity, as forward Simon Becher set up midfielder David Viox for the score.

“I’m disappointed,” coach Fran O’Leary said. “I thought it was an even first half, we had another golden opportunity that we didn’t take and that’s been the story of the last three or four games, we’ve had very good chances that we haven’t capitalized on. We gave away what we thought was a cheap goal….and then we’re chasing the game. The team that scores first in college usually wins and for the fourth or fifth game we’ve had a chance to score first and hadn’t.”

The match started slowly, but eventually, both teams gained offensive momentum, as UMass (4-6-0) began to put more pressure on Saint Louis early. The Minutemen had a few great chances to score in the first half, including a steal by forward James McPherson right in front of the net. Despite those opportunities, UMass still didn’t put a shot on goal in the first half.

O’Leary started Benjamin Wiemann in place of McPherson at forward. Wiemann, listed as a defender, represented an intriguing attempt to solve UMass’ scoring drought in recent games. McPherson subbed in for freshman forward Quinn Serafino in the 23rd minute.

The Minutemen came out with a burst of energy in the second half, continuing to battle despite a quick injury to Saul, who didn’t return to the game. Later on, McPherson created another excellent chance as he started to break away with one man to beat on defense. When he got to the box, he passed it backwards to Cronin, who just missed to the left on a powerful strike.

As the second half wound on, though, the Minutemen wore down. Becher found the net for the Billikens in the 70th minute on a cross from star forward Leo Novaes to seal UMass’ fifth straight loss.

“It’s a combination of a little bit of bad luck and a little about composure in front of the goal,” O’Leary said. “It’s a cruel game and these conference games are tight games. You only get a small number of chances.”

The return of Cronin was a major silver lining for UMass despite the tough loss. He looked like his usual self, with an impressive amount of activity in all areas of the field. Cronin’s tremendous impact on the team’s communication was clear, and his leadership will be vital going forward.

“What we kind of need is that whole leadership role. I’ve been around the game in D-1 and I’ve got a lot of experience,” Cronin said. “For me and Chan (Chandler O’Dwyer) it’s a good leadership role. I need to act up and be a leader out there to try to push our team forward even more while we’re down.”

The Minutemen continue A-10 play on the road at 7 p.m. this Wednesday against Davidson.

Richard Rodgers can be reached at [email protected] and followed on Twitter @RichardDRodgers.