UMass men’s soccer loses to No. 24 Yale on a miracle deflection in extra time

The Minutemen had a goal called back in the second half 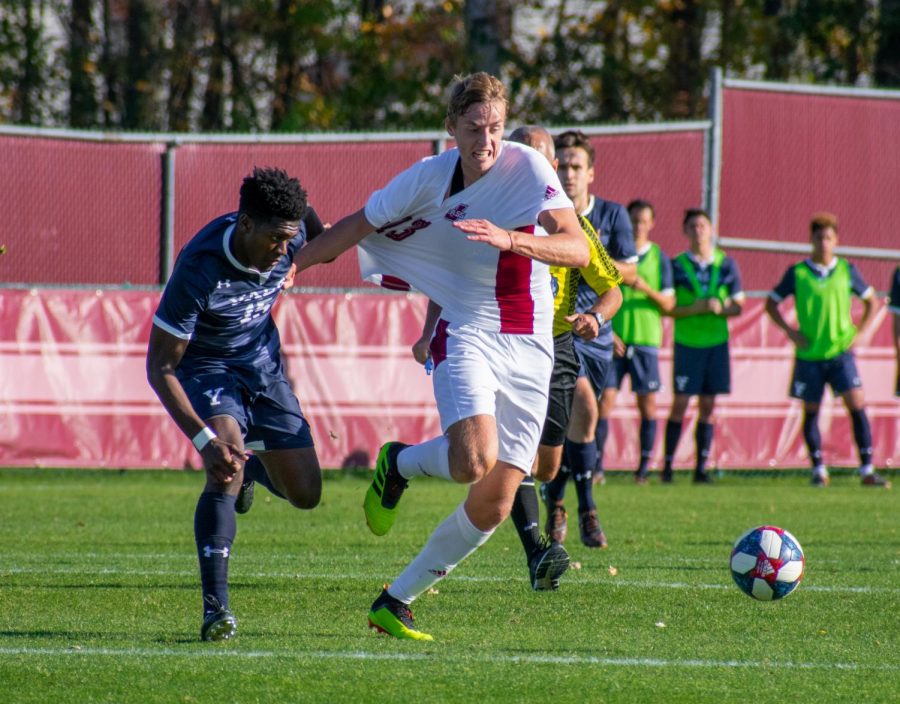 It took a miracle goal in the 99th minute for No. 24 Yale to beat the Massachusetts men’s soccer team 1-0.

The Minutemen (4-9-0) did well to wrestle control in extra time, but a deflected shot from outside of the ball found its way to the top corner for the win.

“I’m really proud of the boys,” freshman Ryan Levay said. “We went with a really young class in the middle. A redshirt came out and we had three freshmen against their two seniors and a junior. Everyone put in a great effort and we battled to the end. It was an unfortunate goal, but I’m really proud of us.”

The pace was frantic from the opening kick, as both teams lobbed balls over the top and kept everyone on their heels. The entirety of the game was an all-out sprint, as the only time that players were able to get any rest was during injury stoppages and fouls.

The Minutemen had the upper hand early, capitalizing on multiple mistakes made by the Bulldogs (8-0-2) and getting into the final third at a higher rate. The ability of Yale to create chances from out of nowhere was shown midway through the first half when it scored a goal that was called back because of an offside. After that, the two teams just fought for control for the rest of the game.

The second half had some bright opportunities for the Minutemen, highlighted by a goal scored by freshman Quinn Serafino that was negated by a questionable offside call.

Everything came to a head in the 99th minute when Yale midfielder Miguel Yuste attempted a shot from outside the box that was deflected and went off of the post to the top corner, just out of the reach of goalkeeper Marvyn Dorchin.

The defense had a strong showing in defeat, surviving six Yale corner kicks and five shots on goal before the game-winner. The defense also did a great job of intercepting and deflecting balls before they became serious chances.

“Guys are just disciplined,” coach Fran O’Leary said. “Christian Labeck made a key clearance in the second half. Ryan Saul got his head on a couple of balls that looked like they could’ve been goal bound. Then, in overtime, Eli Cronin made a fantastic header to clear at the back post. Guys were in the right places. You’ve got to be in the right place but you also have to make plays and our guys did just that today.”

The midfield also had a strong performance against Yale. Yale’s midfield had two seniors and a junior, while UMass’ midfield had three freshmen. Highlighted by the play of Ryan Levay, the group headed away and intercepted many of the Bulldog’s opportunities to create shots.

“I thought he was superb today,” O’Leary said of Levay. “He has a tremendous work ethic. He just got across people, he kept things alive. Ryan put in many miles today but he affected the game. A lot of guys can run and not affect the game. He won so many first and second balls for us. His play along with others allowed for us to compete against a top 25 team.”

Yale was ranked 24th in the most recent poll and is currently undefeated, winning its last eight games. The Minutemen are currently on an eight-game losing streak. A strong performance against Yale was certainly not expected of UMass.

“We did our jobs, we were in the right place, brought energy, won first and second balls,” O’Leary said. “I thought we were great. If that goal is allowed, you’ve then got even more energy. Our guys are resilient. We’re in a bad spell and to put in a performance like that today is a credit to their character.”

Javier can be reached by email at [email protected] and followed on Twitter @JMeloSports.