The University should support low-income students 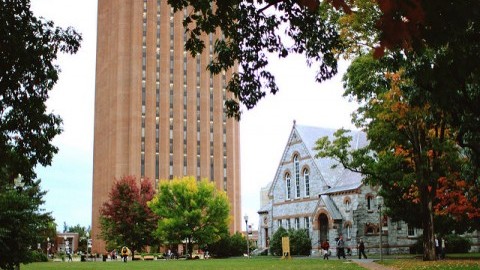 It was at the University of Massachusetts that I learned to call a place home once more. As a first-generation and low-income student from a homeless background, I long dreamed of the chance to rewrite my narrative and my future. I saw college as a place of stability and safety where I could explore my passions and find community, beyond the threat of housing instability, food insecurity and classism. I was fighting for this longed-of future not only for myself, but for my family and my six younger siblings. What I did not realize upon admission to the University was the dual cost and power of the impoverished identity in a university setting.

I thought recovery was as simple as finding myself in a stable home for the first time in seven years, my freshman year dorm. I found it difficult to unpack my belongings – and while I created a space for myself in Pierpont Hall and through clubs and organizations, I left boxes and bags packed under my bed for fear of losing my new sanctuary. I found it difficult to trust and even more challenging to emotionally connect with those in the community, coming from an environment where poverty was understood. At the same time, my financial stability was in flux; I could not afford a required e-book for a course, after which my professor recommended that I apply for an emergency loan and plead my case to the textbook company.

I felt alone, my class identity invisible to the sea of students I was surrounded by. I heard stories of international vacations to sites I had never been. Confronted with foods like crème brûlée, I had not heard of nor understood how to eat such a cuisine. Publicity became my coping method. I wore the story of homelessness and poverty not only for advocacy, but to avoid uncomfortable interactions. My world transformed and grew to proportions I could never have imagined, and yet my story felt fraudulent. In an education system that structurally was not built for marginalized students, we wear our experiences and are forced to create our own support spaces.

In order to foster a truly inclusive community, UMass needs to include, support and empower first-generation and low-income voices. Through a first-generation low-income student support center, the University can achieve this goal – by offering academic resources, psychological support, financial services and community building in a centralized location.

At this University, 25 percent of students are first-generation, meaning that they are the first in their family to attend college. This is an umbrella term, however –  first-generation students can have parents who have attended but not completed college or have  parents who may have attended universities of different structure. What connects these circumstances is one simple facet: limited knowledge of the college setting.

Additionally, there is a lack of economic diversity on campus. As seen in a New York Times study, 46 percent of the study body comes from the top 20 percent income-wise, whereas six percent of students hail from the bottom 20 percent. While it also says that this is “about typical” for colleges in Massachusetts, the public flagship university of the UMass system should strive for greater economic diversity on its campus. The UMass system fosters student alienation and a lack of class awareness on campus, as impoverished and working-class students are made to feel that they do not belong. As college becomes more unaffordable and low-income students are priced out, this will become an even more prevalent reality.

First-generation and low-income students are pioneers and change-makers, rewriting the stories they have been told of their background to create the futures they so dream of. While the University has committed itself to the support of first-generation student voices through programming and events, the creation of an FGLI support center would offer students the resources and community to more easily flourish upon admission. This structure could be modeled off of the existing cultural centers and the Stonewall Center, which provide support, programming and resources to cultural identities and the LGBTQIA community, respectively.

Other universities across the nation have centers to support the experiences of FGLI students. Tufts University, for example, has the FIRST Resource Center which “was founded to create a community of support and to develop a network of resources for Tufts University’s first generation, low-income and undocumented populations.” What justifies their creation is the belief that “it is imperative that first gen students are provided an inclusive space that is sensitive to their intersecting identities and where their shared experiences can be validated.” As higher education becomes more unaffordable, inclusive spaces for first-generation and low-income students can foster college success and could raise graduation and retention rates for the group.

My struggle to find community was solved through student organizations, but it came at the cost of a perpetual identity crisis and culture shock. How was I to feel I belonged in a university I was struggling to afford, in an environment lacking the representation of marginalized communities, plagued by the memories of my past? This is a story that is not dissimilar for other students of first-generation and low-income backgrounds.

While our identities are invisible, there is power in our experiences. With the creation of a first-generation low-income student support center on-campus, the University would truly foster a community of dignity and respect for students in need of a chance.