Minutewomen remain in third place in the A-10 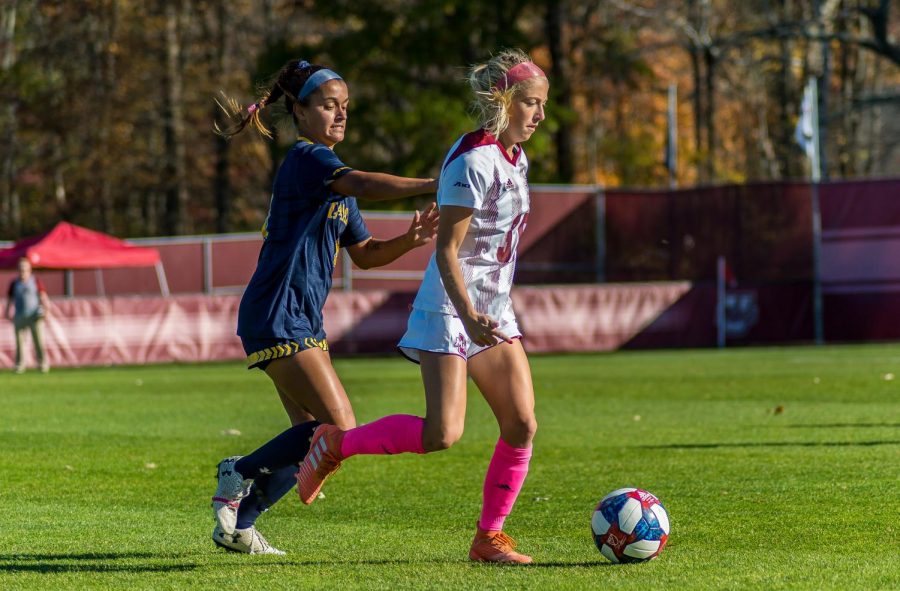 After trailing on two separate occasions, the Massachusetts women’s soccer team netted four goals against La Salle for a commanding 4-2 victory, guaranteeing the Minutewomen home field advantage for the quarter-final matchup of the Atlantic 10 tournament.

Lauren Bonavita opened the scoring for UMass with a long-range effort from 20 yards away that found itself in the top left corner of the goal 10 minutes into the second half. The accuracy was too much for the Explorers’ goalkeeper, Claudia Jenkins, to handle, as her high-flying dive still wasn’t enough to keep the ball out of the net.

“Once I get the ball I always look to see if there’s a chance to shoot,” Bonavita said. “I thought it was open, so I just took the shot.”

The Minutewomen had some of their best passing all season, controlling the tempo of the game and allowing them to play to their style. Coach Jason Dowiak focused on possession throughout practice this week in preparation for a La Salle team that can score at any moment.

“We got a little bit direct at times, trying to get an early goal,” Dowiak said. “At halftime we talked about calming the game down and looking to play in the feet more often. I thought there were some really impressive moments in our build to get to goal.”

Despite allowing two goals from long range that were too high and out of the reach of goalkeeper Peyton Ryan, the Minutewomen defense controlled the ball and played lockdown defense for almost the entirety of the game.

Left center back Dani Sclafani has been the facilitator of the UMass back line all season. While commanding the defense for the Minutewomen Thursday, Sclafani was able to find pockets of space to play the ball into the midfield or out wide to the wing backs. Chemistry between the back line has built up since the beginning of the season, and it showed Thursday with almost no errors against a diverse La Salle team.

“We’re lucky enough that the three of us center backs are really close off the field,” Sclafani said. “We know every time we play we’re stepping out there for each other, and we know, including Peyton, that when we’re together we can accomplish anything.”

Right back Serena Ahmed got herself on the scoresheet, netting UMass’s second goal of the day. After the ball found its way to the top of the penalty area, it only took one touch then a finish for Ahmed to place a curling shot under the crossbar.

True to 2019 form, UMass scored two goals in the last five minutes, providing no time for the Explorers to surge a comeback.

“We dig some holes for ourselves at times,” Dowiak said. “But we know that we will always be creating another chance to find a way to win. Find a way. That’s all it’s been about this year.”

The Explorers only trailed the Minutewomen by one point in the A-10 heading into this contest.

The Minutewomen will conclude the regular season with a matchup against VCU, with UMass looking to close off its season on a six-game unbeaten streak in the A-10. The game is set to tip off at 1 p.m. on Sunday, Oct. 27.