Zac Jones gets three points and a win on his birthday 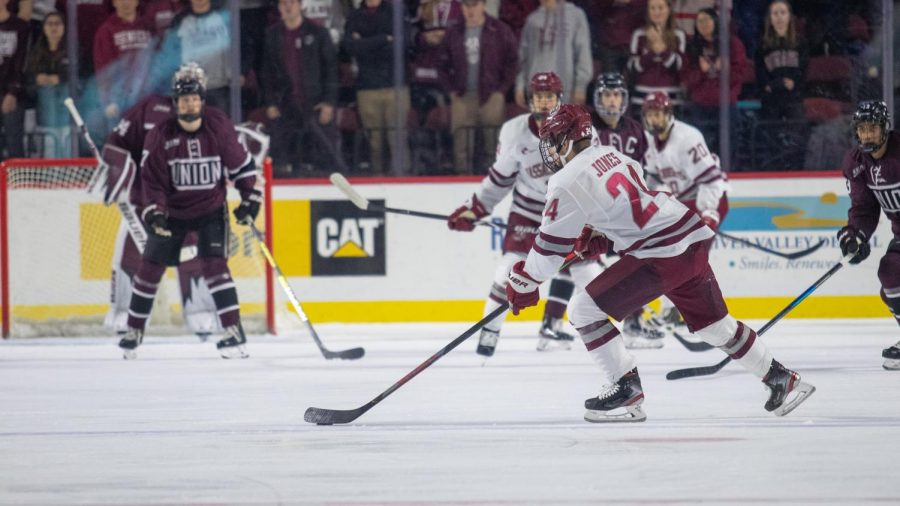 A lot went right for the Massachusetts hockey team in Friday night’s 6-1 win over Union. Out of all the positives, the play of freshman defenseman Zac Jones stood out, on his birthday no less.

“I was just trying to come out here and play my game,” Jones said.

With just 9.5 seconds remaining in the second period and UMass (2-1, 0-1 Hockey East) holding onto a 2-1 lead, Jones took a wrist shot from just inside the blue line and Reed Lebster deflected it into the back of the net. The assist gave Jones his first point of the night and put Union (0-5) at a two-goal disadvantage.

It didn’t take long after the intermission for Jones to make his presence felt again. A Minuteman goal 25 seconds into the third stretched UMass’ lead to 4-1. Just 13 seconds later, Jones ripped a shot from the point. The shot beat Union goaltender Darion Hanson to give the Minutemen a 5-1 lead.

His three points on Friday mark his second multi-point performance of the season, bringing his season total up to five in the first three games of his career.

When asked if Friday’s game was the best performance he’s seen out of Jones, Carvel responded: “Yeah, he’s one of the freshmen that took a big step.”

Despite just turning 19 years old, Carvel has tasked Jones with plenty of responsibility at the start of his first season. The freshman defenseman quarterbacked UMass’ first power-play unit again on Friday; a unit that broke through after a poor showing against Northeastern. After going 0-5 on the power play Tuesday in Boston, Jones and the Minuteman power play broke through with a goal on their third attempt.

Midway through the second period, Union forward Colin Schmidt was whistled for a hold, which gave UMass its third, and what proved to be final, opportunity on the man-advantage of the night. With just under 10 minutes to play in the period, Ty Farmer dropped the puck to Jones skating across the top of the left circle, who then sent a pass to the right dot where Bobby Trivigno was waiting and one-timed a shot between the legs of Hanson.

“The goal we scored was really nice execution, good creativity by the guys,” Carvel said. “Ty and Jonesy doing a switch and then feeding it across. That’s not something I’ve drawn up for them, that’s just them being good offensive players.”

“For me, it’s always about what he’s doing without the puck,” Carvel said. “With the puck, he’s a really gifted player, I’m never concerned about that. He had a rough outing against Northeastern, but tonight I thought the defensive part of his game was much better.”

Despite being known for his play in the offensive zone, Jones is making progress for UMass in the back end as well.

“I’ve been trying to preach to myself the last two games, ever since I’ve been here, to work on my defensive game, work on getting better in that end of the ice,” Jones said. “Tonight, I don’t know, it just was clicking. Me and [Colin Felix] out there, we had good chemistry, we were working well with the puck.”

While Jones came to the Minutemen known most notably for his offensive game, his development as a defender could prove vital for a UMass team playing three freshman defensemen early in the year. His play is especially important while the Minutemen continue to endure the absence of defenseman Marc Del Gaizo.

Jones should only continue to improve with more time in the system.

“Coming into a new program, you’ve got to learn all the systems, stuff like that,” Jones said. “All the guys have been helping me out a lot. So, it’s been good to be with them and work on the systems in the [power play] and we’re starting to have more chemistry now for sure.”

Jones and UMass return to the ice on Saturday night for the back half of their two-game weekend series against Union. Puck drop at the Mullins Center is set for 7 p.m.