Next viewing will not occur in North America until 2049 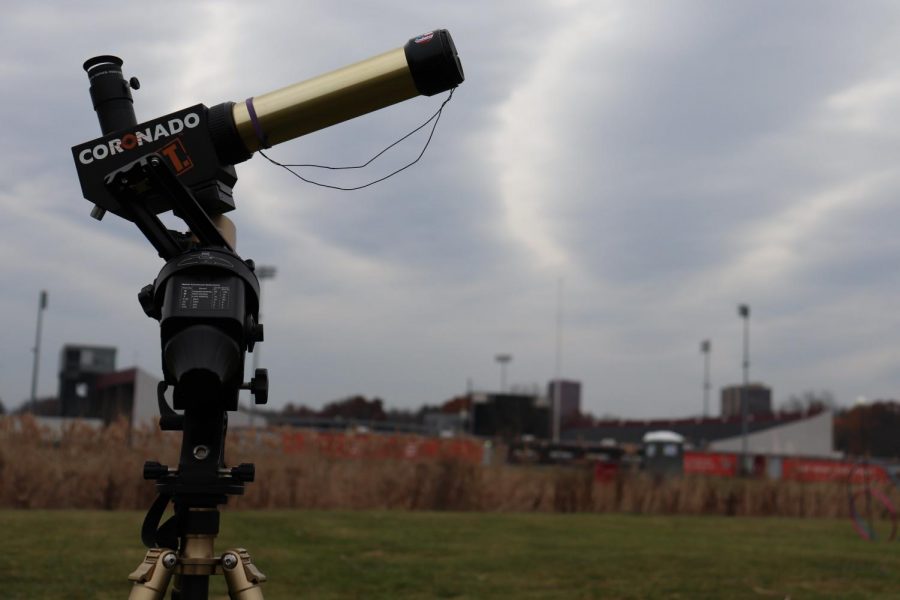 On the Veterans Day holiday, astronomers and astronomy enthusiasts alike gathered at the University of Massachusetts’ Sunwheel to witness a rare celestial phenomenon in which the planet Mercury crosses the face of the sun from the perspective of the Earth.

However, this rare occurrence, which will not be visible again from North America until the year 2049, was overshadowed by the inclement weather of the day – an overcast forecast of clouds blanketing the sky amidst a chilly 40-degree day of no classes.

For those who did venture out between the hours of 7:36 a.m. and 1:04 p.m., when Mercury visibly transitioned, they were greeted by UMass astronomy professor Stephen Schneider, who stuck out the cold and cloudy conditions throughout the transit. Schneider regularly hosts special space viewing events at the Sunwheel including the summer and winter solstices and the vernal and autumnal equinoxes annually.

Had the weather been clear, those in attendance could safely view the first planet in the solar system appear for several hours as a small black dot with the aid of a telescope, the only possible way to view the passage – as Mercury, 40 percent the size of the Earth, would not appear by viewing the sun directly with or without special glasses.

A press release for the event warned, “to prevent serious eye damage it is extremely important to view it only using properly designed filters. There is no time during a transit when it is safe to look at the sun directly.”

At the event Schneider, accompanied by the head of astronomy department, Daniela Calzetti, noted that Mercury usually only crosses the sun “about once every ten years roughly, they’re a little bit random depending on the alignment of the Earth and Mercury and so it’s unusual to see these events.”

“If [Mercury and the Earth] were actually absolutely in line with each other we’d see a transit every 90 days or so because it would always be passing in front,” Schneider said, “but instead the orbits are a little bit tilted.”

Schneider also noted that in order to see the transit it must be during the day and that while other transits of Mercury will occur in 2032 and 2039 respectively, in North America it will be nighttime and therefore unviewable. For 2032, Schneider said he believes Europe and Africa will be able to witness the transit.

Schneider noted that one of the last major planetary transits was that of Venus, which occurred several years ago and drew big crowds on a much sunnier day.

“We did this for the transit of Venus, which is even rarer, those only occur about once a century or so,” Schneider said.

While Mercury’s entire transit was visible across the East Coast this year, the weather played against the outer space enthusiasts. “For this we were hopeful, but you never know,” said Schneider.

Peter Kleeman, a graduate student studying history and former undergraduate of UMass, and Danielle Raad, a Ph.D. candidate in anthropology, came to the event together to try to get a glimpse of the passing.

“I’ve been getting more interested in naked eye observation and a friend of mine sent me a link about Mercury’s traverse, I woke up to see it this morning and I just quickly got online to see where observations might be happening around here,” said Kleeman on how he learned about the telescope viewing at the Sunwheel.

Kleeman, a previous student of Schneider’s when he was an undergraduate, said he has become increasingly interested in special cosmic events, such as the 2017 solar eclipse, ever since he first witnessed Halley’s comet as a child in 1986.

“It’s one of my earliest memories and they taught us in school that we’re of a generation where we might, if we live a full, long life, might live to see it twice and so that’s become one of my life goals is to live ‘til 2061 so I can see the return of Halley’s comet,” said Kleeman.

“So, if I can make it to that, that means then that I will have lived long enough to see Mercury cross in front of the sun again,” he added, acknowledging how the cloudy conditions prevented a chance to see the planet closest to the sun.

“We tried,” said Raad, adding “I’ve driven by the Sunwheel so many times and it’s nice to just even get to walk around in it.”

The Sunwheel, located south of McGuirk Alumni Stadium, is a solar calendar and observatory, similar to Stonehenge in England that uses standing stones to line up with solar locations on the horizon at the time of solstices and equinoxes, according to its website.

For those eager to see other big celestial events, Schneider and Calzetti noted that there will be a total solar eclipse that will pass through New England in April 2024.

“We’ll probably be better than 90 percent coverage here, but there’s nothing like 100 percent,” said Schneider.

Calzetti noted that northern sections of New England, such as Vermont, will see a path of full totality.