After Sunday’s stumble, No. 5 UMass looks to battle it out against Boston University

Four crucial Hockey East points up for grabs in the showdown 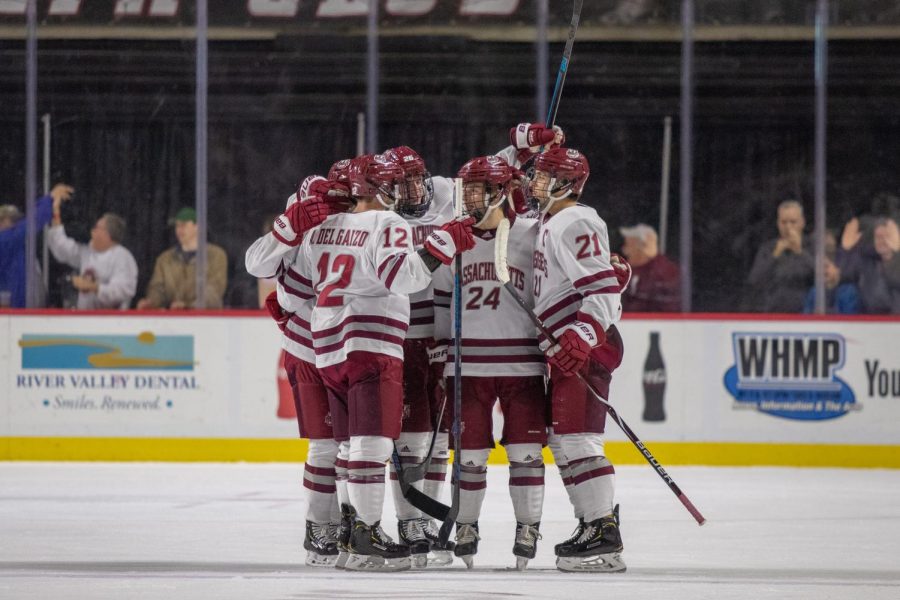 With time winding down on Sunday afternoon at the Whittemore Center, the Massachusetts hockey team pushed hard for the equalizer late in the third period at New Hampshire, and it nearly cashed in.

Trailing by a goal with four minutes remaining, Mitchell Chaffee had a chance to tie it up on the power play during an onslaught of offensive pressure by UMass, but his one-timer rang off the crossbar. Following a steady stream of penalties in the first 40 minutes, the Minutemen (6-2, 2-2 Hockey East) got desperate for a win too late and were dealt a 3-1 defeat after an empty netter.

Moving into this weekend’s home-and-home set against Hockey East foe Boston University, No. 5 UMass looks to bounce back from its second loss of the season and improve off of Sunday’s stumble.

“We had a lot of opportunities, including myself, and I got to bear down, I got to score there,” Chaffee said Tuesday. “It’s inexcusable not to win that game and not being able to score more goals.”

“I thought we weren’t ready to play since the first drop of the puck,” Bobby Trivigno said. “We just got to battle harder. We went in there thinking we’d just win the game based on skill and it was going to be easy, and obviously that wasn’t the case. UNH is a really good team and we just did not battle hard enough. You have to have a will and a way to get the puck in the net. We got to have someone in front of the paint, in front of the goalie’s eyes at all times, and any time there’s a scrum or loose puck it has to go in, you can’t miss opportunities like that.”

The second line sophomore’s statements are part of a common theme for the Minutemen as they get set to take on the Terriers (2-3-4, 1-2-3 HEA) on Friday at Agganis Arena before returning to the Mullins Center on Saturday: to up the intensity and play a full, hard-nosed 60 minutes of hockey, not waiting until they’re down late to put up a fight.

“On the road, our discipline is not good, our compete needs to be a little better and our desperation needs to start at the beginning of the game instead of the third period,” Greg Carvel said. “It’s the mental barrier of having the season you had last year where you start thinking you get to show up and win, and that’s not the case. UNH was the much more desperate team, you could see that in their effort to block shots. So, that’s the margin right now and we’re trying to deal with it and be more desperate going into games and we better be this weekend because it’s another good team.”

In both losses early in the season, UMass showed a lack of discipline, taking a combined 14 penalties. In eight games, the team is averaging 13.5 penalty minutes per game with a combined 43 penalties.

“We need to raise our compete, but we also can’t be taking that many penalties,” Chaffee said. “We’ve been taking way too many penalties this season and it’s kind of come back to bite us.”

BU enters the weekend coming off a home-and-home split against No. 10 Providence. The first game ended in a 3-3 draw, but the Friars (5-3-2, 3-2-1 HEA) came out on top the next night in a 6-5 offensive slugfest that saw Terrier defenseman David Farrance record a hat-trick in the loss.

Outside of Farrance’s 14 points on a team-leading eight goals, five of which came last weekend against PC, BU is bolstered offensively by its first line of Patrick Curry, Trevor Zegras and Patrick Harper. Through nine games this season, the trio accounts for 35 of the Terriers’ 88 total points.

With some trouble in the net for BU early in the season – Sam Tucker and Vinnie Purpura have struggled with .891 and .860 save percentages, respectively – this weekend provides a solid opportunity for UMass coming off the poor showing against the Wildcats to put its points of emphasis to the test: battling harder, making it more difficult on opposing netminders and potting the ugly, gritty goals in the dirty areas of the ice.

The Minutemen began to form an identity and set their standard of play during their recent sweep of Northeastern, but they did not play to it on Sunday, and now they’re looking to get back to their game.

“They always have some high-end offensive-minded defenseman that really add to the offense,” Carvel said. “They’re a lot like us, they’re trying to find their identity. A lot of teams in our league are much different than last year, so I think we’re both two similar teams that we’re going through some growing pains at times, can be really good at times, and it will probably be whichever team can find their identity this weekend will probably win.

“The only thing that matters right now is we’re a .500 team in Hockey East in 8th place. That’s where we are, so I’m hoping that’s a wakeup call to our guys, because again, you guys have seen stretches where we were really tough to play against, but the margin is not big enough for us not to play to our standard and think we’re going to win games.”

“Dial it in,” Trivigno said succinctly after practice. “We weren’t ready to play [Sunday], and we have to be ready to play against this skilled team. We gotta play hard and just outwill them this weekend.”