As BU’s goaltending suffers, UMass thrives between the pipes 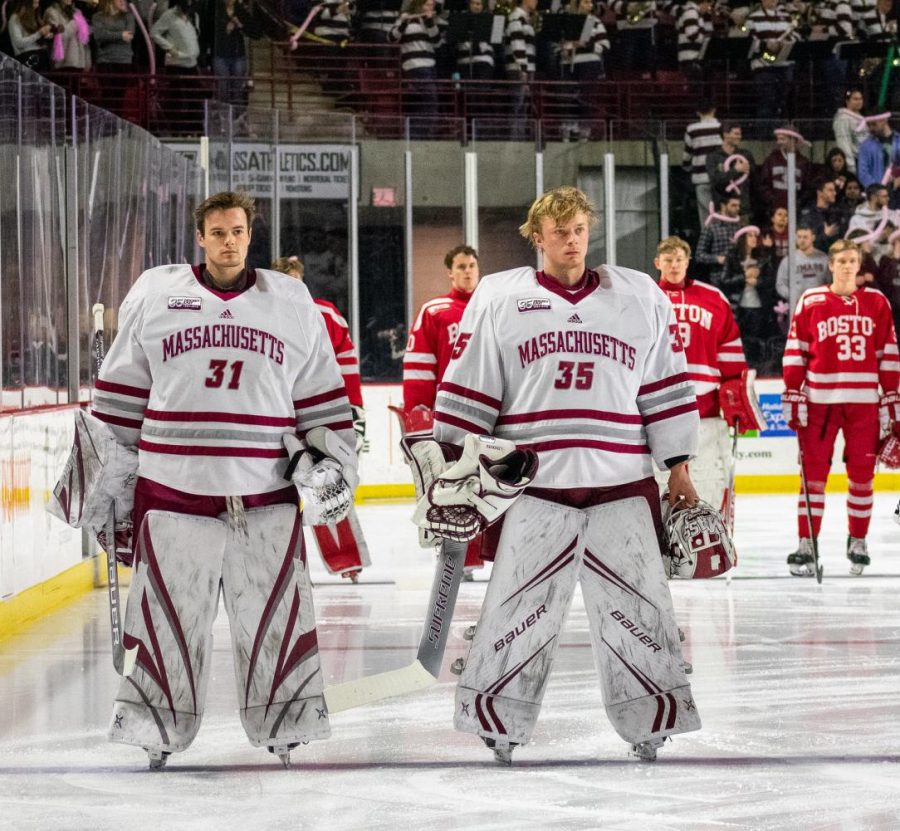 Through all the winning over the past year, there’s been one ongoing question that’s been asked too many times to count. It’s permeated through the Mullins Center, through the practice facility, to the ends of Amherst and into the college hockey world.

Who’s the starting goalie for the Massachusetts hockey team?

It’s a warranted question – there’s only one net, and UMass (6-2-0, 2-2-0 Hockey East) has two very qualified candidates for it. Coach Greg Carvel’s answered that question and elects to go with the hot hand and split time between Matt Murray and Filip Lindberg. He’s kept his word, as both netminders have played four games each.

But maybe, just maybe, that question should cease to be asked, and you should take a moment to appreciate the two-goalie system working out as well as it has.

Here’s why this is being brought up now.

UMass is getting set for a two-game series with Boston University this weekend. It’s a huge Hockey East series for both teams. But what’s most stunning is the contrast between the two programs in net.

BU (2-3-4, 1-2-3 HEA) has mightily struggled in net thus far since losing Jake Oettinger after last season. Newly minted starter Sam Tucker enters Friday’s game with a goals-against average of 2.75, which ranks 49th at the Division 1 level. His .891 save percentage isn’t much to boast alongside his 2-1-4 record.

The Terrier offense hasn’t been that bad – they put up five goals against Providence last Saturday. The only issue: Tucker and backup Vinnie Purpura gave up six in the loss.

After the game, freelance hockey writer Mark Divver tweeted that BU is “in the market for a goalie to come in at Christmas.”

Maybe the goalie controversy in Amherst isn’t so bad after all.

“We’re very fortunate,” Carvel said of the two-goalie system. “It’s really tough to win if you don’t get goaltending and I’ve been on teams before where your team can really give you everything they’ve got, and the goaltender doesn’t carry his weight. But that’s not our concern. It’s the least of our concerns right now.”

As it should be. Murray’s posted the third-best GAA in the NCAA at 1.51 with a save percentage of .918. Lindberg’s held his own as well, posting a GAA of 2.01 and a .917 save percentage. With both goalies playing as well as they are, it highlights just how fortunate the Minutemen are.

“We are lucky here at UMass that we have two goalies that can play,” assistant coach Jared DeMichiel said. “I think that’s pretty standard across the board in college hockey that most schools have at least one or two guys that they think can play. But Matt and Fille have grabbed the bull by the horns and taken advantage of an opportunity and made it very easy on us to put them back in the net.”

Last season ended with the starting job up in the air. After playing the majority of the games during the season, Murray was replaced in the first game of the postseason and Lindberg carried the torch for the rest of the run. Some thought that one of the two netminders would have a shaky start.

That hasn’t happened yet.

And what does the goalie guru think of Lindberg’s performance thus far?

“He’s been really calm,” DeMichiel said. “I think his glove hand, I think he’s calmed that down. He’s done a really good job of snaring some pucks and he’s gotten a little bit better at playing the puck.”

A large part of the two-goalie system that UMass rolls out is competition. The best goalie plays and when he starts to falter, the other comes in to take over. It’s a facet of the Minutemen’s game that’s only gotten better with time.

It’s also something that both goalies seem to appreciate a lot.

“I think it’s the best-case scenario,” Murray said. “Especially having two guys like [Lindberg] and I. Not only is it great for us as an inter-team competition always battling it out in practice and battling for that ice time that’s always going to push us and each other to get better and better and better. There’s no room for complacency, which is exactly what I would like here, being in a spot where I’m always being pushed and where I have no choice but to be getting better.”

“I think it’s important,” Lindberg said of the net battle. “We’ve been both playing well here, and I feel like we both push each other out there every day. We make each other better because obviously there’s a competition going on and I think that’s a good thing.”

With BU on the horizon for this weekend, Carvel admits that both will probably get a game. It’s still somewhat early in the season – with both goalies having solid numbers, no favorite has emerged yet to take hold of the starting gig.

“I enjoy it,” Carvel said of having both Murray and Lindberg. “It’s great. It’s good. Two good goalies. It’s awesome. I wish I had two nets. They both deserve it.”