Kessel was penalized for a game misconduct in the second period 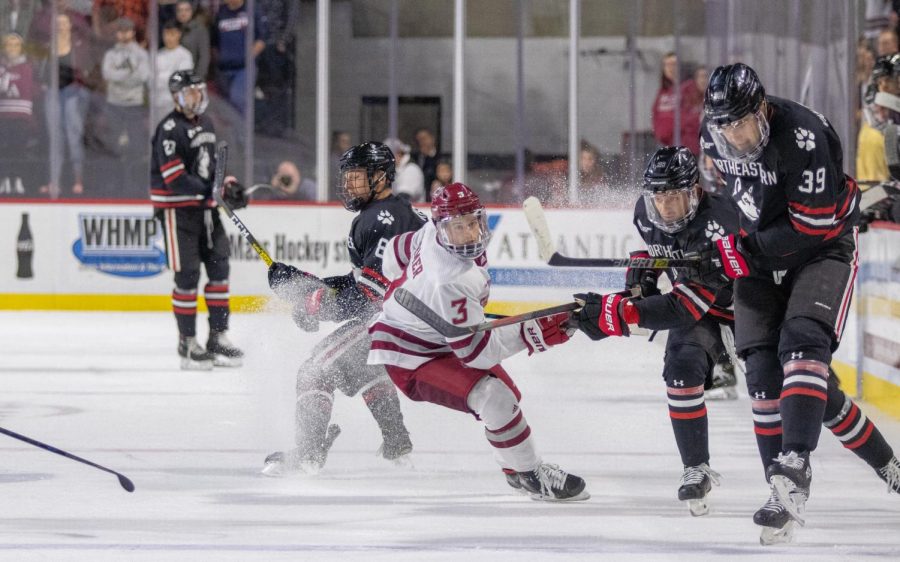 With Massachusetts up two goals midway through the second period, Matthew Kessel collided with Zach Solow in the corner, contacting his head. Seconds later, with the referee’s arm in the air signaling the delayed penalty, the Huskies buried a one-timer to pull within one. The play cut UMass’ early lead in half and left them with just five defensemen for the remainder of the game.

“We had to really show the character — we lost Kessel halfway through the second,” coach Greg Carvel said. “Our five defensemen were outstanding.”

Just seven games into the season, No. 3 UMass has lost a defenseman in three of its contests. The Minutemen lost defensemen twice due to injuries, while tonight’s loss resulted from Kessel’s game misconduct. In those three contests, UMass is 3-0 despite being down a player.

Not only were the Minutemen short on players on their defensive core, Saturday’s game saw both teams forced to play with five defensemen as Northeastern lost one of their own in the first period, forcing both teams’ defensemen to finish with high minute totals.

Although UMass lacks experience on the back end, skating three freshmen, they rode what experience they do have through their young careers for the second half of the game.

With each defenseman playing more minutes once Kessel left the game, Carvel trusted the likes of junior Jake McLaughlin, and sophomores Ty Farmer and Colin Felix to step up.

“You ride the guys that you can,” Carvel said, “and McLaughlin is a big horse, Felix — those guys are big strong kids and you can really ride them, they can play a lot of minutes. Whereas [Zac] Jones and [Gianfranco] Cassaro are younger guys. They’re still getting used to this pace, this intensity.

“Our older guys are leading the way.”

Of that group of defensemen, Jake McLaughlin particularly stood out with his heavy workload.

“Jake McLaughlin is probably the most underrated player in Hockey East,” Carvel said. “He just quietly makes big, big plays that the average fan probably doesn’t notice, but we do.”

Although you’d expect a team to struggle defensively after having a player sent off, the Minutemen instead stymied the Huskie offense, especially in a third period that saw Northeastern generate only three shots on goal.

“Farmer, Felix and McLaughlin were really the stars of the game,” Carvel said, “just because of the heavy minutes they played and how well they played them.”

On top of the strong play of the veterans on the back end, UMass’ defense also owes its success to the play of Matt Murray in net.

“I thought our goaltending was outstanding this weekend,” Carvel said.

Murray stopped 16 of the 18 shots he faced, with just one coming after Kessel’s major penalty. The one goal also resulted from a turnover that left Murray on the wrong end of an odd-man rush.

UMass’ defense succeeded in the face of adversity despite also being without top defenseman sophomore Marc Del Gaizo, who continues to miss time with an injury.

UMass’ defense returns to the ice next Sunday at New Hampshire. Though they’ve been successful thus far, the Minutemen would undoubtedly like to finish the game with the same six defensemen they start with.