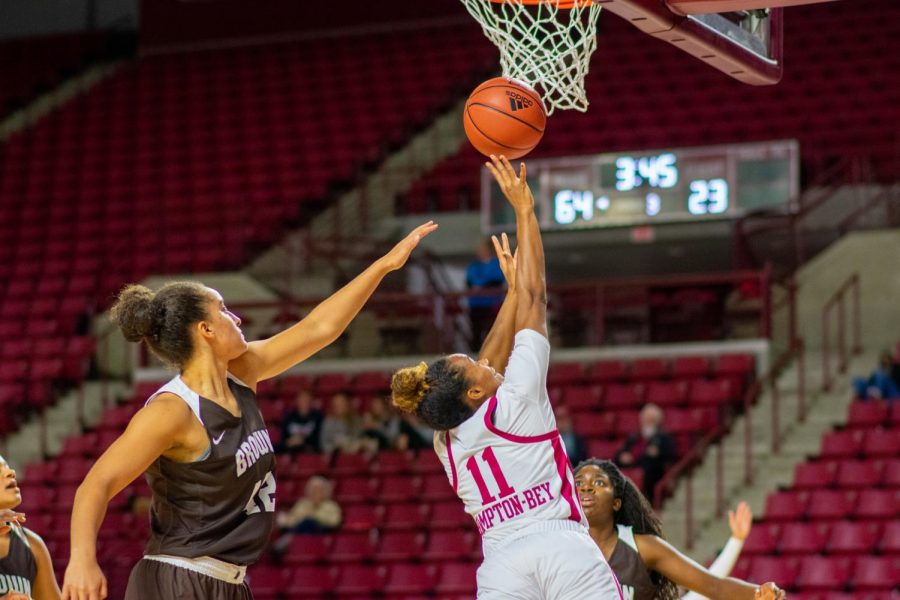 It was the finest night of the young season for the Massachusetts women’s basketball team, and it all started inside.

The Minutewomen (3-2) came into the season expecting imposing freshmen Maeve Donnelly and Angelique Ngalakulondi to revitalize a guard-heavy offense dependent on deep shots, but it was guards Destiney Philoxy and Bre Hampton-Bey driving into the paint that opened up the UMass offense in a 95-42 win over Brown (2-3).

“Honestly, my shot was working for me, and the way my team adjusted around what I did,” Philoxy said. “So when I drive, they were there for the kick, or when I caught the ball, the bigs were picking and popping, so they basically adapted to what I was doing, and that worked a lot.”

Everything worked for the Minutewomen, including shooting from behind the arc, where they had struggled in the first four games. UMass shot 53.1 percent on threes after coming in shooting 36.3 percent from deep.

That revitalized 3-point shooting started inside, as Philoxy and Hampton-Bey froze defenders and found Hailey Leidel and Paige McCormick on the perimeter. The two combined for 11 assists, and when the Bears let them drive, both were able to make them pay.

“I think those guys did a great job of attacking downhill,” coach Tory Verdi said. “When you do that, you get teams in rotation, and then we were able to kick the ball back out and knock down open threes, and so I just thought we were hitting on all cylinders. It seemed like no matter what we were throwing up, it was going in here tonight.”

The passing was the source of a banner night for UMass, which finished with 25 assists as it shredded Brown’s defense and generated one open look after another.

“I think our ball movement’s key… we were just swinging the extra pass, and we weren’t forcing anything, we were letting the offense roll,” McCormick said. “I think that was the key to today.”

Philoxy finished with 15 points on 4-of-6 shooting, while Hampton-Bey scored nine and hit both of her 3-pointers. Coming off the bench, Hampton-Bey provided a jolt of energy to the UMass offense, with two particularly impressive passes to Maeve Donnelly down low to build momentum in the Minutewomen’s 35-point third quarter.

Hampton-Bey also gave the Minutewomen a spark late in the fourth quarter, with UMass holding a 50-point lead and the game all but over.

“We’re up 50-something points, and they have a fast break, and Bre Hampton-Bey sprinted the length of the floor and she back-tapped the ball out of bounds,” Verdi said. “So instead of just giving them a layup and quitting on the play, she sprinted down to keep them from scoring. That’s who we need to be, that’s my expectations of us.”

Much of that scoring surge has been due to the growth of Philoxy, UMass’ most dynamic threat and the focal point of its offense. Through five games, Philoxy has averaged 14 points and four assists per game and shot 46.5 percent from the field.

“Last season, I was only a driver, so teams are going to step up,” Philoxy said. “At the same time, it’s hard to guard me. I’m a driver and an up-and-coming shooter.”

So far, that resurgence driving the ball inside has powered the Minutewomen and their rejuvenated offense to three straight wins. UMass will have an opportunity to stretch the streak to four on Monday against St. John’s.