Flaherty: Identity starting to take shape for Minutemen in 2019

UMass is ranked No. 3 in NCAA, 6-1 record through four weeks 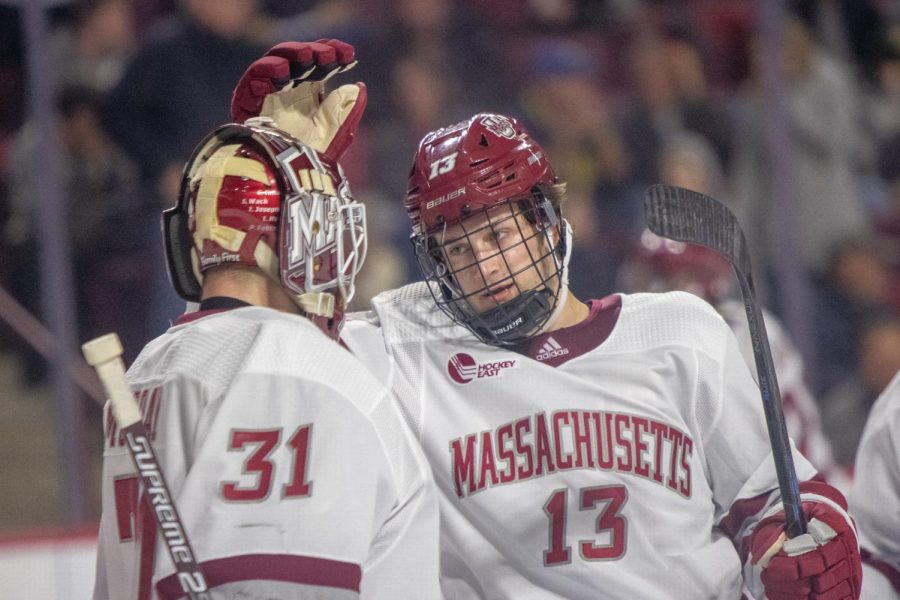 The Massachusetts hockey team had yet to be truly tested before this weekend against Northeastern.

With one-offs against Renssalear and American International, as well as the series against Union, the Minutemen (6-1, 2-1 Hockey East) haven’t been able to show what their team is made of just yet.

They saw some struggles on their way to a 4-1 start like any young team does in the first month, but roadblocks bring growth and a learning curve that’s necessary to improve early in the season.

With eight freshmen in the lineup, three in the back end, and the absence of defensive stalwart Marc Del Gaizo to start the season, it hasn’t been the easiest of roads for No. 3 UMass seven games in.

On Oct. 15 against Northeastern in the second game of the year, the young team faced its first hardship of the new campaign. On the road, in a barn Greg Carvel was previously 0-6 in, it was a messy, penalty-ridden introduction to Hockey East play on a Tuesday night for the young guys, one of several growing pains the cast of eight freshmen experienced through their first five showings.

They bounced back with three wins in a row, but the level of competition wasn’t what it needed to be. Even still, the Minutemen continued to learn about themselves, not just satisfied with wins.

When they got the chance for a rematch with the Huskies (4-2-1, 1-2 HEA) coming off a split with St. Cloud State, UMass got the chance to show just how high its potential can be this season, battling out back-to-back character wins over a Hockey East foe that forced it to show their best stuff.

With two big wins over a top-10 opponent, the Minutemen are beginning to form an identity.

On Friday when they returned to Matthews Arena for a Hockey East series showdown with NU 18 days after the 3-1 downfall, they stormed into Boston and exercised four-year-long demons.

In six games of Carvel’s tenure, UMass had never won a game in the barn. But they did just that.

It wasn’t just the fact of the win that meant so much though, it was how the Minutemen won the game; going down two goals in the opening ten minutes before coming back with a vengeance to dominate the rest of the way after a second period shellacking that led to an eventual 6-3 victory.

“I’m very proud of our group,” Carvel said after completing the comeback at Matthews. “For this young team that was a bit of a statement game, but it will only be if we follow up tomorrow night.”

On Saturday, UMass used its early energy to get on the board unlike the night before, before blowing its two-goal advantage in the second period and having to dig deep to recreate the lead in the third.

After scoring with 10 seconds left in the opening frame to make it 1-0, junior John Leonard was back at it again in the third period, potting his second game-winning goal in the past eight days.

Neither win was easy, but four points is four points, and the Minutemen showed a lot of heart in them.

“This was going to be a great weekend to show what this year’s version actually is and I thought we played really well at times,” Carvel said Saturday night. “We showed some real high character.

“It’s huge,” Leonard added following the sweep, who now leads the team with seven goals for third-most in the country. “Anytime you win a Hockey East game to begin with it’s big-time. Northeastern is a great team and it was a tough series. Kind of stole a game last night from them and tonight we were able to come out on top again. Just coming out fast and doing what we do is tough to beat.”

When UMass plays aggressive, smart with the puck and hard on its skates, it’s tough to take down, and that’s the identity; the foundation it has to build on.

Granted, there’s still a long way to go, but the Minutemen know what they need to improve in their game, and now they’ve been tested. Now, they know what to expect and what it takes to win.

“We’re getting there,” Carvel said in the aftermath of Saturday’s win in front of 4,573 fans. “We’re still inconsistent. We need to play closer to 60 minutes and we’re not quite there, but we’re getting there.”

It just comes down to executing to their identity, and right now that identity’s starting to take shape.