Freshmen struggle mightily down low for the Minutewomen 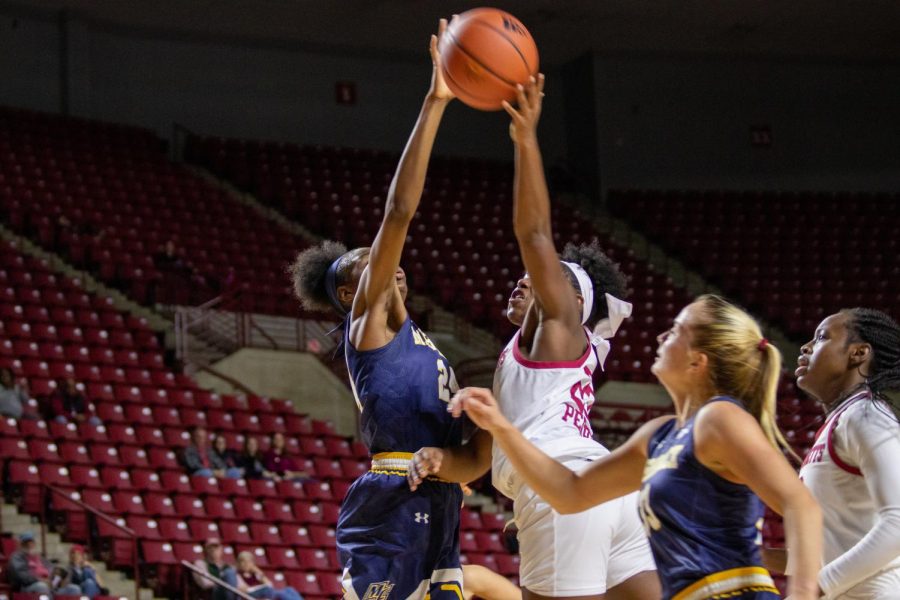 The Minutewomen (0-1) had no answer for the 6-foot 1-inch senior, who propelled Merrimack (1-0) to an early lead that slowly stretched to an insurmountable deficit. On one end, concern about her scoring ability inside brought UMass defenders creeping in, leaving her teammates for wide-open threes. On the other end, she was racking up blocks and almost singlehandedly throwing the UMass offense out of whack.

“Honestly, I don’t think we read the defense very well when it came to that, because there was openness,” junior Paige McCormick said. “We just for some reason went right to her. Didn’t make any sense.”

Davis-Stewart went up against freshman Maeve Donnelly inside to start the game and thoroughly won that battle, frustrating any attempts by the Minutewomen to get going inside. Despite a four-inch height gap, Davis-Stewart blocked several shots from Donnelly in the opening minutes and scored almost at will.

When the Minutewomen did start to put up resistance in the paint, Davis-Stewart stepped outside and took some of those open threes for herself, and the Warriors kept rolling.

“We need to have interior scoring, scoring on the block, and we didn’t have that,” coach Tory Verdi said. “I think that all those empty possessions early on I think kind of rattled us, and then the threes that they knocked down hurt us as well. It was like it wasn’t supposed to happen to us, and it did.”

By the time Verdi called timeout midway through the third quarter, the Minutewomen trailed by 18 and Donnelly was relegated to the bench for the rest of the night.

“We had three freshmen out there for the first time, but again, they’ve had experience,” Verdi said. “You go back, we’ve had 40 practices. We have 40 practices, we had five games – three in Portugal, an exhibition game, and then a scrimmage, so it wasn’t like it was their first game. But yes, it’s the first college game, and for whatever reason we did not execute the way we should have on both sides of the ball.”

As Donnelly struggled, UMass tried swinging McCormick inside, then brought in fellow freshman Angelique Ngalakulondi. Ngalakulondi had the most success on defense, keying a series of stops midway through the fourth quarter that briefly energized the Minutewomen. But the offense never found a rhythm, Ngalakulondi didn’t hit a shot from the field, and it proved to be too little, too late.

When all was said and done, Davis-Stewart finished with a triple-double, scoring 31 points and racking up 13 rebounds to go with 12 blocks. Donnelly and Ngalakulondi finished a combined 2-of-11 from the field for seven total points and nine rebounds.

“I thought Angelique did some really nice things for us down the stretch,” Verdi said. “Both her and Maeve are going to play a lot of minutes, and we know that. Each and every single day, those guys are going to continue to work hard and improve. But we definitely need them to develop so we can score inside, and for whatever reason we weren’t able to do that tonight.”

In a season with high expectations, improvement inside was expected to be a major part of a leap forward from the Minutewomen, and that didn’t show up Tuesday afternoon.

“I’m glad that this happened early, because my question to my team is, ‘Who are we?’” Verdi said. “Are we going to be resilient? Do we have enough character to respond to this? We’re facing adversity right now. I want to see who they are as players and if they can respond to this.”

UMass will get a crack at answering those questions on Saturday against Providence.