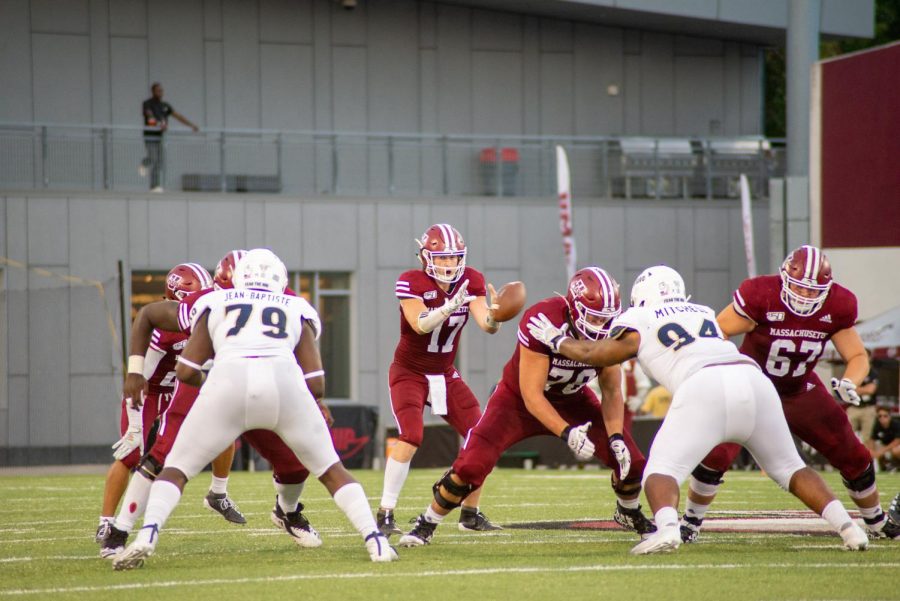 The 2019 season has been full of adjustment and adversity for the Massachusetts football team.

With one game left, the Minutemen (1-10) have struggled to put together much consistent play this year. A new coaching staff, an incomplete roster, and trouble with the fundamentals—tackling, most prominently—has seen the team suffer its worst record since 2013.

“The insight that Bilal Ally, Kyle Horn, Randall West, Michael Curtis, Mike Caggiano, Sadiq Palmer and all the guys that have been here and been through the ropes has told me everything I need to know to be successful here,” junior running back Cam Roberson said. “Randall West and Mike Yerardi kind of just said to cherish each other and cherish these moments because they go by in the blink of an eye.”

Cherishable moments seemed to come far and few between for UMass this season. The Minutemen hit their high point in week five, winning 37-29 over Akron starting third-stringer Michael Curtis at quarterback. The biggest lead UMass maintained all season was in its Week 1 game versus Rutgers, where the Minutemen led 21-7 at the end of the first quarter before succumbing to 41 unanswered points from the Scarlet Knights.

UMass has failed to score over 10 points on three different occasions, being shut out against Florida International and mustering only seven and six points in its two most recent games, versus Army and Northwestern. It allowed over 50 points six different times and over 60 points four different times, point totals that could have been much higher if teams had chosen not to play their backups in the second half against the Minutemen.

These trends may very well continue in Saturday’s matchup versus a solid Cougars team that averages 27.7 points per game against a tough schedule.

It’s been a difficult year on both sides of the ball for the Minutemen. Lack of depth and inexperience has seen UMass fall to dead last in defense among all Division I teams. Mistakes, an unreliable first-down offense, and a quarterback carousel dropped them to 114th of 130 teams in scoring. However, there is light at the end of the tunnel for the Minutemen.

The lack of depth has prompted many young players to get time on the field, giving them playing experience that will prove useful in years to come. Of the 28 freshmen on the roster, 11 have seen live game action. Among this group are starting wide receiver Jermaine “OC” Johnson, cornerback Josh Wallace, and offensive lineman Helber Fagundes.

“We’ve had so many freshmen who have had to play significant reps” coach Walt Bell said. “400, 500, 600 game reps on the year, especially some young d-linemen. Even all the guys who have redshirted fall between 200 and 300 game reps. That’s huge and that will help grow the program…In time we will be a well-calloused team and that’s something to look forward to.”

In addition to its developing freshmen class, UMass can find some hope in its recruiting efforts. The Minutemen have already secured 19 hard commits for the 2020 season—including pro style quarterback and three-star recruit Brady Martin of Lawrence Academy.

With the end of the season comes the end of UMass careers for many seniors, including West, Palmer, Curtis, Yerardi and Isaiah Rodgers. With so many seniors moving on after Saturday’s Senior Day game, new leaders must emerge in the Minutemen locker room.

The Minutemen will look to build some momentum toward the future against BYU on Saturday. Kickoff is slated for noon from McGuirk Stadium.