Hampton-Bey’s return a plus for UMass women’s basketball 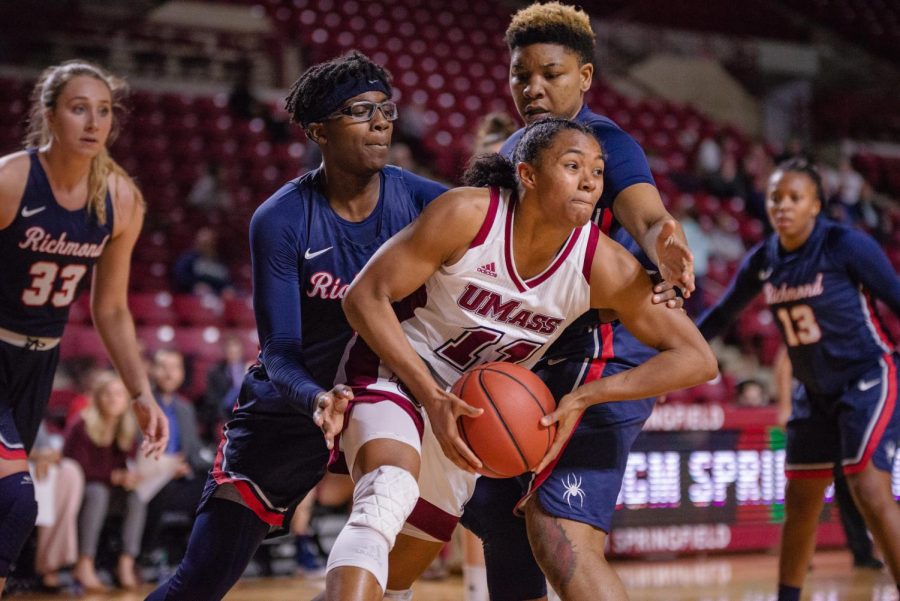 Bre Hampton-Bey made her season debut on Saturday and made an immediate impact on the Massachusetts women’s basketball team, logging 24 minutes and appearing mostly as a guard at the two-position.

The 5-foot 6-inch junior had 11 points and five rebounds during UMass’ (0-2) 72-63 loss to Providence (1-0) and felt strong after missing Tuesday’s opener. She should see her role increase even more as she becomes even more comfortable with the game speed. But for her first game back, Hampton-Bey felt good.

“I felt like I did a lot of good things,” she said. “I know I can do better in some of the things I was doing out there. Just having a lot of energy, play some good defense, and motivate my teammates.”

Hampton-Bey’s impact was felt far beyond the stat sheet. She’s a leader who makes sure to hold her teammates accountable and keeps the intensity high all throughout the game.

“I do like to pride myself on that, especially on defense,” Hampton-Bey said. “Getting on my teammates and making sure I stay on them at all times so we all can be on the same page, so that’s something I like to bring and our team needs that from me. I just love being that role player who brings a lot of energy and keeps everyone on their toes.”

Hampton-Bey brought that energy to the defensive end of the court on Saturday. After not starting and playing just 10 minutes in the first half, she played 14 in the third and fourth quarters and the difference was noticeable. Providence shot nearly 50 percent in the opening frame, while in the second half the Friars went 9-of-25.

Fourth year coach Tory Verdi has coached Hampton-Bey the past three years and knows how important she is to the Minutewomen in all aspects of the game.

“I thought Bre did a lot of really nice things,” he said. “I thought she did a really nice job of attacking the basket. She knocked down a three for us. Her overall energy and effort at times was unbelievable. It is something that we were missing and didn’t see in game one. She’s our x-factor this year. We need her and she knows that, so I’m expecting big things from her moving forward.”

From a logistical standpoint, Hampton-Bey’s presence gives needed depth and alleviates the pressure felt by the UMass guards, allowing them more time on the bench to take a breather. On Tuesday, Destiney Philoxy and Vashnie Perry each played 30 minutes. On Saturday, it was just Philoxy who eclipsed the 30-minute total.

“It allows me to rotate our back-court guards,” Verdi said. “We didn’t have that luxury, especially someone that has played a lot of basketball, so I am able to take out Vash, keep her a little fresher and move Destiny to the point so I’m able to rotate three players for two spots.”

Another thing Hampton-Bey’s addition allows is for Verdi to ride the hot hand. On Saturday, that was Philoxy. Philoxy’s minutes actually increased from Tuesday to Saturday, but that extra time proved worthwhile, as she led the Minutewomen with 15 points on 7-of-14 shooting. She did have 13 points against Merrimack, but it came on a 5-of-18 clip.

Meanwhile Perry, who struggled at times on Saturday, going 0-of-4 from beyond the arc and 2-of-8 overall, played five fewer minutes than she did in game one.

With three players vying for two spots on the court, UMass could change up its starting five in the future and give teams a few different looks.