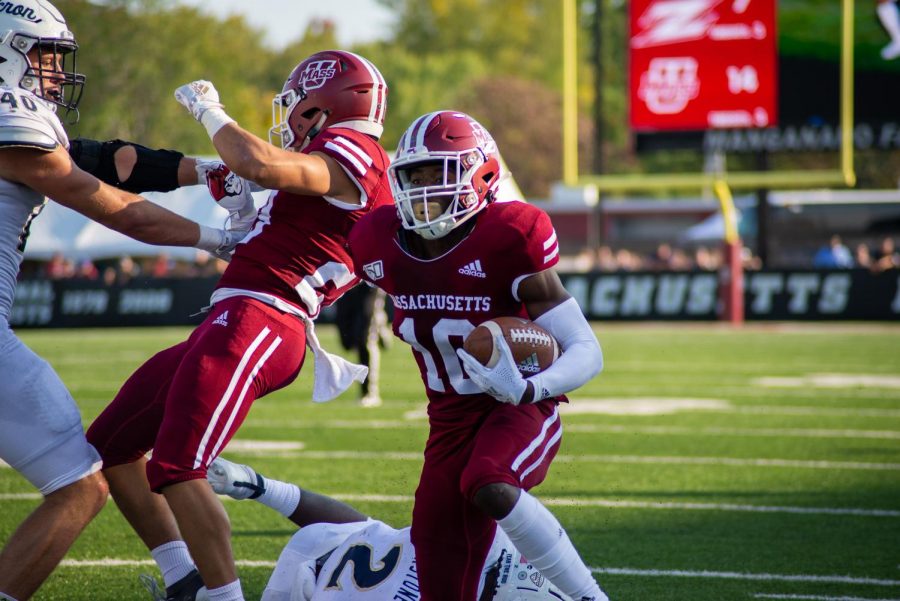 As the Massachusetts football team nears the end of a difficult season with very few positives, it’s time to take stock of what growth the Minutemen have seen.

UMass (1-10) is on pace for a historically bad defense, allowing 52.4 points and 555 yards per game heading into a matchup with Brigham Young (6-4) this weekend. Both threaten UConn’s record worsts from 2018, and the Minutemen appear poised to rewrite the Huskies’ record of 50.4 points allowed per game.

At the same time, the defense has played much stronger the last two weeks, even when it hasn’t shown in the final score. Unlike much of the year, UMass has started to make tackles and eliminate mental errors, two major weaknesses that routinely allowed opponents to gash the Minutemen.

“I would say definitely just getting more comfortable with the scheme, knowing what we’re supposed to be doing and going out there and executing,” linebacker Cole McCubrey said. “We’re having a lot less mental busts and everything, which has been huge. I think everyone’s been buying in and everyone’s been doing their job.”

Although the Minutemen gave up 63 points in back-to-back losses against Liberty and Army, they put up a better showing against Northwestern last week, holding the Wildcats to 24 points through the first three quarters.

True, Northwestern came in with one of college football’s worst offenses, but it was a much better performance than against another struggling Big 10 opponent to start the year, when UMass gave up 31 second-quarter points to squander a 21-point lead against Rutgers.

“More than anything else, a lot of young players [are] getting a little bit seasoned and getting more accustomed to major college football, especially with as many young guys as we’ve started to play,” coach Walt Bell said. “On the coaching side of things too, you truly start to know who your personnel is, what they can and can’t do, so not only those young players doing a better job, just knowing where those young players fit and what they can do well.”

That has largely been the focus of this season, developing players who will be part of the future for UMass. While most of the season hasn’t given much to celebrate, the last couple weeks have given a little bit of hope on the defensive end and shone a light on the players who are making a good impression for the years to come.

First among them is freshman cornerback Josh Wallace, who stepped into the starting lineup midway through the season due to injuries and never looked back. Through the first 11 games, Wallace has racked up 33 tackles, forcing a fumble against Louisiana Tech and recording his first career interception last week at Northwestern.

Wallace’s name came up immediately for both Bell and McCubrey when they listed the young players making an impact.

“Josh Wallace is going to be a really good football player for us,” Bell said. “And for him, I think he’s got a chance to be a long-time, three/four-year starter and be a great player for us.”

Down in the trenches, the Minutemen benefited from the return of redshirt sophomore Chris DiTommaso two weeks ago against Army. Appearing in just his third game of the season, DiTommaso made six tackles against the Black Knights, as many as he made in all of 2018.

Despite being a redshirt sophomore, DiTommaso has two years of eligibility remaining and has made a big difference since coming back, helping to spur UMass’ leap in finishing tackles.

“He’s played really well,” McCubrey said. “He was out for a lot of the season, and it was huge having him come back. He’s a guy, you tell him what to do, and he’s going to do it to the best of his ability. So, he’s been great the past two games, really helping us out.”

Alongside DiTommaso, freshmen Wilson Frederic and Billy Wooden have held down the fort on the defensive line after the departures of Charly Timite and Shannon Junior II earlier in the year. While UMass’ run defense has been putrid all year, those two have gotten valuable reps which may be beginning to pay off down the stretch.

“They’re awesome, they’re great kids,” DiTommaso said. “I’m excited for what they can do in the future. I feel like they’re young, they’re really inexperienced, but this year really helped them. Big things to come with them two.”

Big things to come has been the rallying cry all year for UMass. The Minutemen hope that the small promise of the past two weeks is just a glimpse of that.

For the moment, they will continue to look for those incremental improvements and hope that they’ve turned a corner.

“There wasn’t a specific moment,” DiTommaso said, “but I think playing Northwestern, holding them to 21 at half and [24] going into the fourth, I think that was a big mark in when we knew we were coming together.”