The senior defenseman is anchoring the young, shorthanded defensive corps 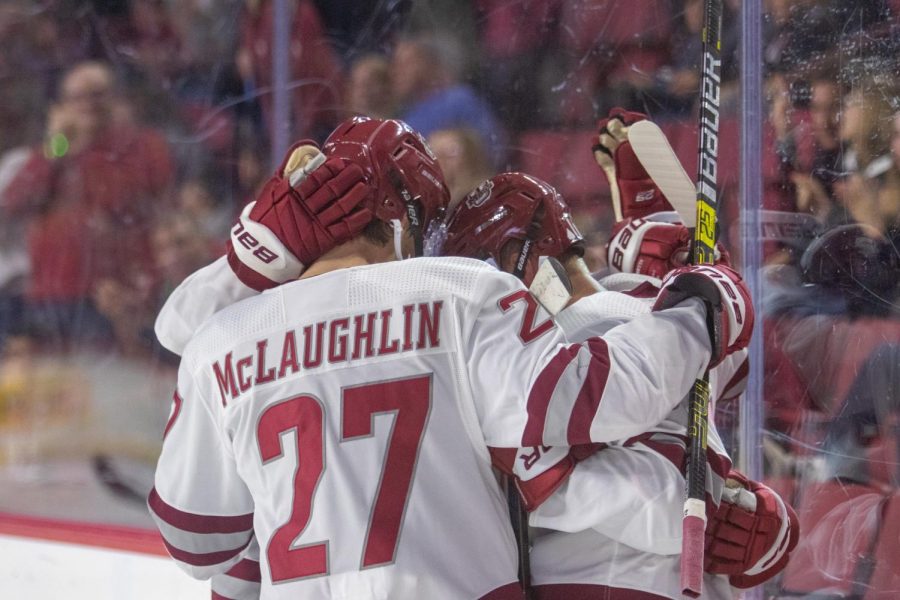 In a league with five teams in the nation’s top-20, that’s some pretty high praise from his head coach.

When you really get down to it though, No. 27’s presence in the defensive end truly has been immeasurable this season. In a back end featuring a trio of freshmen, four sophomores — still missing Marc Del Gaizo — and McLaughlin as the lone senior, the impact of his play has been enormous.

With substantial knowledge of the systems and what the fast-paced collegiate game entails – as well as being one of only three veterans left from Carvel’s inaugural season at UMass in 2016 – the senior has become one of the main pieces on the Minutemen’s (6-1, 2-1 HEA) back end in the wake of Cale Makar and Mario Ferraro joining the National Hockey League in the offseason.

After his junior season playing with Colin Felix on the third pairing, McLaughlin is paired with sophomore Ty Farmer now, and together, the duo make up UMass’ first pair. Carvel spoke highly of McLaughlin’s improvements at the Frozen Four last April, but since then his game’s only gotten better.

“He just quietly makes big, big plays that the average fan probably doesn’t notice, but we do,” Carvel added Saturday, after UMass closed out the sweep-clinching win with a five defenseman rotation in an already-depleted back end. “We’re riding both [him and John Leonard] right now.”

The senior’s increased effectiveness was born from the opportunity that arose in the offseason. When guys like Makar and Ferraro depart, someone has to step up, and so far McLaughlin’s been that guy. 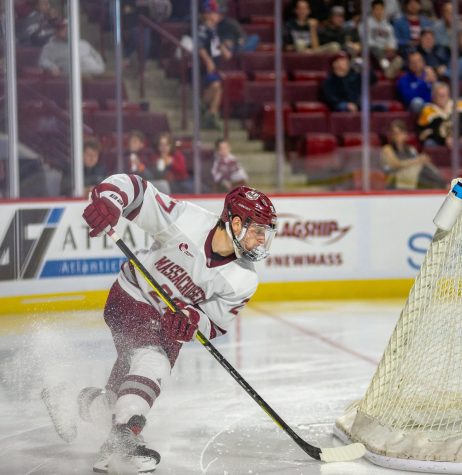 “Obviously Cale and Mario are very good defensemen, they were leading us last year, but with them gone I’ve kind of felt like I needed to take on more of a bigger role this year, and I think I have,” McLaughlin said after practice Tuesday. “Just playing a lot of minutes, playing consistently. So I think if I can continue to play simple, make the right plays, play consistently, eat up a lot of the minutes, help out the young guys who need me, I think that’s a bigger role than what I was playing last year.”

The senior comes up big on the penalty kill, but his biggest role is filled on even strength. He’s the backbone of the defense — holding down the fort and preventing any trouble that comes his way, bailing out his teammates when they jump too far up in the play and get caught in no-man’s land.

His focus on details since taking leadership of the defensive unit has started to trickle down to his teammates, mostly notably his newfound line mate, Farmer.

Farmer spent his freshman year playing alongside Ferraro on the second pairing behind Makar and Del Gaizo, taking on more of an offensive-minded role around the play of those now-NHLers. Since pairing up with McLaughlin as a sophomore, he’s put more of an emphasis on his defensive duties.

“Jake’s a great player and great friend of mine as well,” Farmer said. “He’s just someone that will cover you when you need him. He’s always back there for you, he’s one of our best defensive guys and he’s got some offensive abilities, but I think his defensive game has really rubbed off on mine.” 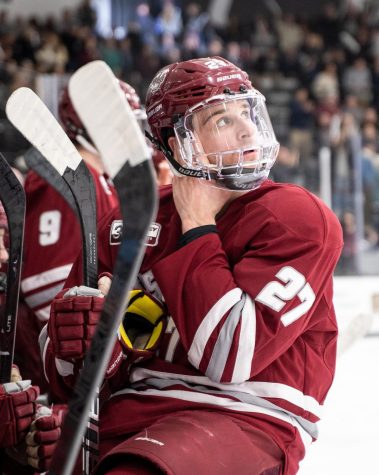 For McLaughlin to be effective, it all comes down to playing a simple, consistent game, and that’s just what he’s been doing. Through seven games it’s working out for him, and while freshmen Zac Jones, Matt Kessel and Gianfranco Cassaro are starting to settle in and get used to the intensity of the college game, the UMass back end is lucky to have him.

“He’s been probably our best defenseman just about every game and he does that because of how he plays defense, not about the offense,” Carvel said. “We’ve got a lot of defenseman who are probably a little too offensive-minded and Jake’s defensive-minded. He does a tremendous job; he’s gotten us out of a lot of trouble. He plays like an experienced defenseman with size, power, skating, and just makes real smart decisions and gets us out of trouble, and we need that early in the year while we try to catch these young guys up to speed.”

When the team travels to New Hampshire on Sunday, it’ll still be without Del Gaizo, but just as it’s been, it will continue to rely on McLaughlin as “the big horse” he’s been this season, Carvel said.

With a pair of scorers in the nation’s top 20, the Wildcats (4-2-1, 2-1 HEA) pose another solid test for the young and developing defensive unit.

Entering the season, there were a lot of questions about what UMass’ defense would look like after losing its stars, but with McLaughlin’s increased role next to Farmer early on, and Del Gaizo waiting in the wings once his injuries subside, the Minuteman back end appears to be in good hands.