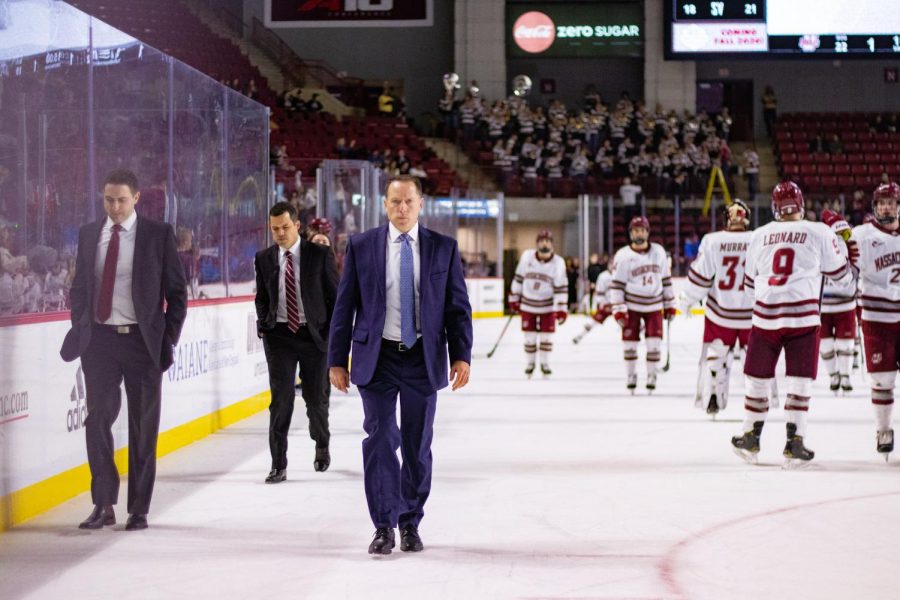 In three games tied after two periods of play this season, the Minutemen (7-3-1, 3-3-1 Hockey East) are 3-0, turning it up after the intermission and relying on their legs to grind out those late wins.

On Friday, they appeared to do it again, breaking a 1-1 tie against Merrimack on Matt Kessel’s fourth career goal halfway through the third period, but the Warriors (2-7-2, 1-3-2 HEA) had other ideas. After a Phillip Lagunov cross-check, they pulled even with two minutes remaining in regulation.

After Bobby Trivigno’s overtime marker from John Leonard was called off for goaltender interference, the remainder of the extra five-minute period ticked away, and the game resulted in a 2-2 draw.

In an area that UMass has been so consistent in so far this season, finishing strong in the third period, that was not the case in this one. That atypical inconsistency was a microcosm for most of the night, as the Minutemen came into the Friday showdown not ready to play up to their standard.

“I thought Merrimack came ready to play tonight, not so sure we were ready to play at the right level,” Carvel said after the game. “Very inconsistent effort and execution for us throughout the game. It was a lack of a lot of stuff. Lack of urgency, lack of compete, lack of structure and it didn’t feel good from the drop of the puck until the final horn.”

“I feel like a lot of guys weren’t ready to compete tonight and it showed off the first shift and its unacceptable,” Mitchell Chaffee added, “especially at our rink, you can’t come out like that. It’s a part of us, it’s a part of our leadership core, and we need to make sure everybody’s ready to go.”

Even after the Minutemen erased the Warriors’ early 1-0 lead just 12 seconds after they created it on a shot from Hugo Esselin five minutes into the first period, they failed to carry their momentum.

“That was a huge response, but it didn’t lead to better play throughout the game,” Carvel added.

For the rest of the game, until Kessel broke the tie with two minutes left in the third, UMass was inconsistent in several areas, struggling to connect on passes and effectively break out of their zone.

“Merrimack was doing certain things really well against us, but the bottom line is we were very unpredictable in our play,” Carvel said. “We just needed to advance pucks tonight, get it to the next zone, win a battle – we turned over a lot of pucks on entry, turned over a lot of pucks in the neutral zone, threw pucks away in the offensive zone, and Merrimack did a really nice job of transitioning.”

Filip Lindberg (24 saves) made some timely stops to keep things tied for a majority of the game, as well as when the Minutemen took the late lead, but he couldn’t fend off the power-play attack in the final minutes. The Warriors capitalized on a costly, but avoidable UMass blunder to tie the game late.

“We can’t take a penalty like that,” Chaffee said. “It’s unacceptable to take a penalty that late in the game from behind like that. We had a lot of opportunities to get the puck out and we didn’t.

With no overtime goal, it marks the first tie that UMass has experienced since February 2018.