UMass finishes 6-2 in-conference, earns the No. 2 seed and a spot in this weekend’s A-10 tournament 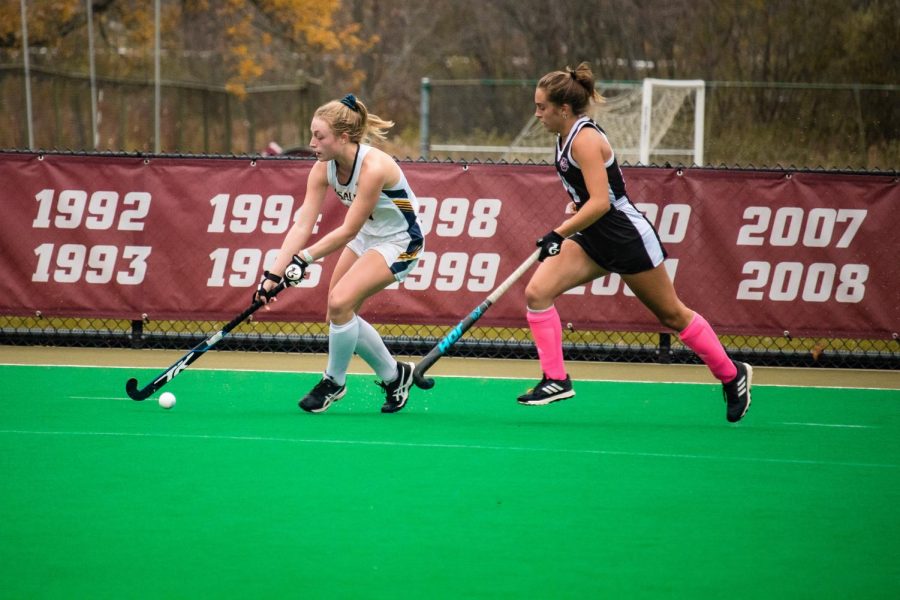 Massachusetts puts the regular season behind and flies into Richmond, Virginia on Wednesday to begin final preparations for the 2019 Atlantic 10 Tournament. A spot in the NCAA tournament is at stake these next two games, along with the title of tournament winners, two accomplishments the Minutewomen have not earned since 2016.

Since taking over in 2017, head coach Barb Weinberg has come close to a championship twice. Under Weinberg, the team has lost in both the semifinals and finals of the tournament. UMass (10-9, 6-2 A-10) leaves the state hoping to improve those results this year.

“One of my long-term goals here was to make it into the A-10 tournament,” said Jess Beech, a freshman midfielder and forward from England, “and to be doing it in my freshman year is fantastic.”

Beech is part of a talented group of newcomers who contributed to succeeding this season. Forward Bella Ianni, another member of this group, has played excellent and finished the regular season with five goals, second only to junior forward Lucy Cooper.

Richmond (10-9, 6-2 A-10) defeated UMass at back on Sept. 29 in a one-goal game. It was a difficult loss to take on home turf for UMass. Starting off with an 0-2 record in the conference, the team was forced to play with its back against the wall the rest of A-10 play.

“The intensity is definitely there from the team. They’ve wanted another competition against Richmond,” Weinberg said, “Richmond is quick, they’re athletic and they’re fit so I expect it to be just as good as a battle as it was the first time we played them.”

The Minutewomen have since put the loss behind them and won six A-10 games in a row, including this past Friday’s crucial win against VCU that solidified their spot in the tournament and earned them the No. 2 seed, one spot behind Saint Joseph’s and one ahead of Richmond.

“The team mindset is that if we work as a unit and trust the process that we have set out between us and our coaches, that we should come out with a win,” Beech said.

The Spiders played aggressive field hockey in their last game against UMass, implementing a strategy that proved highly effective.

“They run a very high press and we had trouble outletting against it last time,” Weinberg said. “In the meantime, we have faced two or three other teams that have pressed us in a similar way so I think that we have more confidence outletting against a high pressing team going into Friday.”

Richmond hosts the tournament, gaining the advantage of a home crowd on such a heightened stage of play. They boast a 5-3 record at home in 2019.

“The older kids give us really good advice on dealing with the crowd,” Beech said. “We understand that Richmond is playing at home, but we have a really long winning streak at away games. Hopefully we can bring what the seniors have taught us about dealing with mental pressure and bring it to the game.”

Success came more often on the road for the Minutewomen this season, capturing seven of their 10 wins away from Gladchuk Field Hockey Complex –  a trend they hope to continue this weekend.

Looking solely at the A-10 statistics, Richmond has the advantage on the attacking end. Richmond has earned over twice as many penalty corners as UMass in the regular season and finished with an average of just over two goals per game, while UMass was just under two.

With a diversity of scorers, they have the talent to match the scoring abilities of Richmond’s talented forwards and defensemen, such as sophomore defender Steffie Bongers who scored five goals in the regular season.

“It is very important [for the offense to come out strong early],” Beech said, “If you can put a team on its back foot you can really mess with their mentality, and that can give a really big advantage in the game.”

In its six-game A-10 winning streak, UMass’ defense has stood out; they have allowed only eight goals to the eight other teams in the conference.

Keeper Marlise van Tonder has particularly stood out with 37 saves, a 0.841 save percentage and four shutouts against the conference.

“We’ve got more left in us,” Weinberg said. “The hope is that we will peak at the right time, but our mindset is that our season is not over yet and to keep approaching one day at a time and one game at a time and we’ll go from there.”

UMass plays Richmond at 2 p.m. on Friday. With a win they advance to the final on Saturday against the winner of the Saint Joe’s vs Lock Haven game.