Maddow will moderate the presidential debate on Wednesday 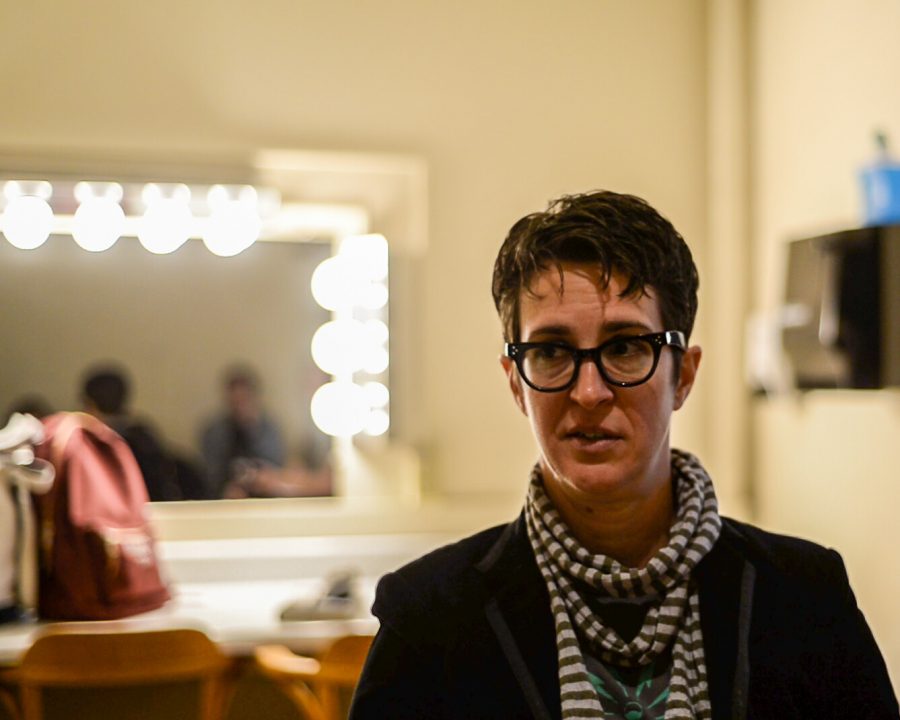 Moderating presidential debates is a complicated process, and Rachel Maddow would know best — she took part in debates in both 2016 and 2020, with the next one coming on Wednesday.

“Prepping for a debate like this, especially when there are 10 candidates on stage — it’s really hard,” Maddow told the Massachusetts Daily Collegian. During the debate, which is broadcast to millions of viewers, Maddow will draw on her extensive journalism career spanning three decades to ask the candidates relevant questions.

“I can’t tell you in advance what’s going to happen at the debate,” Maddow told the Collegian, “but I can tell you that we struggle and work every day in debate prep, which is intense, on how much to do news-of-day stuff and how much to do broader issues.”

From knowing what’s happening in the news, to individual candidates’ policy stances, to controversies between candidates themselves, the 46-year-old MSNBC political commentator and host of “The Rachel Maddow Show” stressed the amount of time and effort that each moderator must put into research.

And with the multiple impeachment hearings occurring this past week, the decision on what questions to ask is only made more difficult. There have been just three impeachments in history, providing little framework for moderators to use when considering to what extent the topic should be included in the debate.

“It’s hard to figure out, ‘Is impeachment the kind of issue that should be in the debate or not?’” she said. “And I think ultimately, we’ll be making decisions on that right up until the moment that we are on the air on Wednesday night.”

“Prepping for a debate like this, especially when there are 10 candidates in stage — it’s really hard,” @maddow said about the upcoming presidential debate while talking with @MDCollegian pic.twitter.com/dxfIkGcdcH

Adding to the complexity of the debate process is the historically large pool of candidates on stage, capped at 10 for Wednesday’s debate.

“I think the way that I approach this… is that this debate will be a success in terms of our performance and behavior, if you remember nothing about us,” Maddow told the Collegian. “There are 10 freaking candidates up there, and they’re the show.”

The debate will be moderated by an all-female panel including Maddow herself, NBC News commentator Andrea Mitchell, NBC News White House correspondent Kristen Welker and Washington Post White House reporter Ashley Parker. Held in Georgia, the 9 p.m. to 11 p.m. debate will be an hour shorter than the previous three-hour long debate held in October.

“To the extent that you notice us at all, it’s almost always a negative. Yes, we have to ask the questions and yes, we will do our damnedest, but it’s not our show,” Maddow told the Collegian.

“This debate will be a success, in terms of our performance and behavior, if you remember nothing about us,” @maddow told @MDCollegian. “There are 10 freaking candidates up there, and they’re the show.” pic.twitter.com/A4JlVeDhcY

Keeping the spotlight on the candidates instead of the moderators themselves, Maddow said, is the goal, allowing candidates to market themselves and make their individual pitches to potential voters.

“We’re trying to set them up on the best possible terms to showcase the ways that Democrats might be making their decision among these candidates,” she said, “but other than that, hopefully you won’t remember a single thing about us.”

Maddow spoke with student journalists from the Collegian and Mount Holyoke News before speaking to a crowd at Mount Holyoke College on the last stop of her book tour. The book, “Blowout: Corrupted Democracy, Rogue State Russia, and the Richest, Most Destructive Industry on Earth,” explores the complex connection between Russia, oil industries and the hacking of the 2016 presidential election.

Before becoming a household name, Maddow got her start in news at a local radio station in Holyoke. A year later she went abroad to earn her doctorate in political science at Oxford University, returning to the Pioneer Valley after to rise through the ranks at The River 93.9 in Northampton. From there she continued to work in radio at multiple outlets, eventually getting tapped to do television gigs. Maddow and her partner Susan Mikula now split their time between residences in New York City and West Cummington, a town of fewer than 1,000 people in Hampshire County.

It’s her time in radio that Maddow credits for her discipline on television — she has hosted “The Rachel Maddow Show” from 9 p.m. to 10 p.m. for the last 11 years. Unlike television, there’s no “distractions and bells and whistles” to rely on in radio — it’s a “very intimate” experience with the listener, Maddow said.

“I haven’t changed my haircut in 12 years,” Maddow told Mount Holyoke News. “I’m not there to be visibly appreciated, and I think that’s from radio training.”

Despite labelling herself as a liberal, the host ultimately put aside the activism that she pursued at a young age, including involvement with the AIDS movement as a teenager, to work in journalism — a field that she believes is vital to the country.

“I think that as long as we are a democracy, we need not only journalism but widespread, well-done, aggressive journalism everywhere in order to keep our democracy alive,” she told Mount Holyoke News. “It’s the oxygen that allows a democracy to live and breathe.”

Although journalism may be suffering economically from massive job cuts and company mergers, Maddow believes the country needs to be growing investigative journalists “by the bushel,” citing the viewership — over 13 million people tuned in —that the impeachment hearings earned as proof that the public is interested in hard-hitting journalism.

“In terms of the big stakes for democracy, accountability is the heart of it, right?” Maddow told Mount Holyoke News. “If a president does commit crimes in office, it’s terrible for democracy, and terrible for the country in general, as an example to the world, if a president’s criminal actions have no consequences. Especially if he brags that he can do whatever he wants as his absolute right, knowing that he can get away with crimes.”

Putting the impeachment and other current events into perspective rather than attempting to impeach the president or pass policies herself is what Maddow believes her show provides viewers.

“I’m trying to increase the amount of useful information in the world, I’m trying to give people useful context,” Maddow said. “I don’t think it would be helpful if I was up there every day trying to lead a movement. I’m not.”

Maddow’s book, “Blowout”, is dedicated “To the trolls and bots, all of you, with love.” The dedication serves as a challenge to those attempting to discredit her and the other media sources, a strong feeling she said grew during her coverage of the 2016 election.

“It’s kind of like a, ‘Bring it,’” Maddow said, laughing. Doing a news show in the 2016 election cycle, “we were very much in the mix of the social-media-distortion-foreign-influence thing… and as we get closer to the election and in the impeachment process, we’re seeing all that come back. And so, I’m sort of just trying to acknowledge that and troll them back a little bit.”