No. 7 UMass hockey looks to gain ground in Hockey East with series against Merrimack 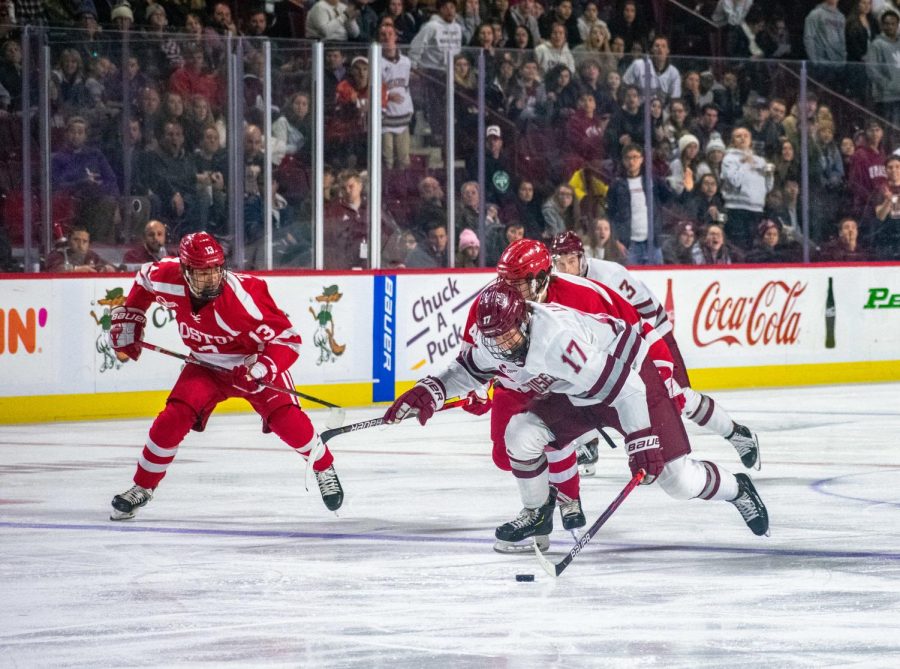 With a 3-3 record in the Hockey East, the Massachusetts hockey team turns its attention to Merrimack College this weekend with two games to earn some much-needed points.

The Minutemen (7-3, 3-3 HEA) come into the weekend after splitting a weekend series against Boston University. With each team winning on their home ice, UMass improved to 6-0 at home but dropped to 1-3 on the road.

The Minutemen will play host in Friday night’s series opener, while Merrimack will host Saturday’s contest hoping to improve on their 0-3-1 record at home.

“They’re going to be hard to play against,” coach Greg Carvel said. “So, we have to be ready to battle at a really high level. We play here Friday night and then going there Saturday night on the smaller sheet, there’s even more battle cause there’s less space.

Merrimack (2-7-1, 1-3-1 HEA) has struggled in the early going of their season. The Warriors find themselves in 10th place in the Hockey East through five games. Their eight-worst scoring defense in the country is mainly to blame, but after giving up 21 goals through its first three contests, Merrimack’s surrendered just 2.43 goals per game in the seven games since.

UMass’ offense sits at the opposite end of the spectrum, as the Minutemen are scoring 3.9 goals per game, the sixth-best offensive output in the country. Mitchell Chaffee leads the Minutemen on offense, supplying a team-best nine goals and 15 points.

“At the start of the season, [our commitment to our identity] wasn’t there so much,” sophomore Bobby Trivigno said. “It was kind of around 50 percent. Now, I feel like, this past weekend we had really good games, up by 90-95 percent following our identity. Once we get to 100 percent, there’s no stopping us.”

Three goaltenders have seen time in net for Merrimack, and it’s yet to be seen who will be tasked with stopping Minuteman shots on Friday. Jere Huhtamaa’s seven games are the most of the group, over which time he sports a 3.49 goals-against-average and a .842 save percentage. Troy Kobryn has started three games while appearing in five. His 2.67 GAA is best on the team. The third option for the Warriors, James Corcoran, has only seen time in one game and allowed six goals on 13 shots.

The Warriors lack a skater with double-digit points for the season. Declan Carlile sits atop the leaderboard with eight points, while Tyler Irvine’s four goals pace the team’s goal scorers.

Merrimack’s lone NHL draft pick is 2015 Red Wings draft pick Patrick Holway. The junior defenseman has yet to appear in a game this season after sitting out last season as a transfer. Holway transferred to the Warriors after two seasons at Maine.

Merrimack head coach Scott Borek is in his second season at the helm in 2019-2020.

“They kind of resemble us, they’re a young team, what we were a couple years ago,” defenseman Jake McLaughlin said. “They’re a young team, they work hard, they compete hard, especially in their own building. So, I think the main focus this week is just our compete level and making sure we’re ready to go in that aspect.”

The Warriors might have one of the worst records in the Hockey East, but UMass expects them to be one of the tougher challenges of this young season.

“They’re hungry,” McLaughlin said. “I think they have something to prove as a team. There’s a chip on their shoulder, trying to gain some respect around the league. It’s definitely something we can’t overlook.”