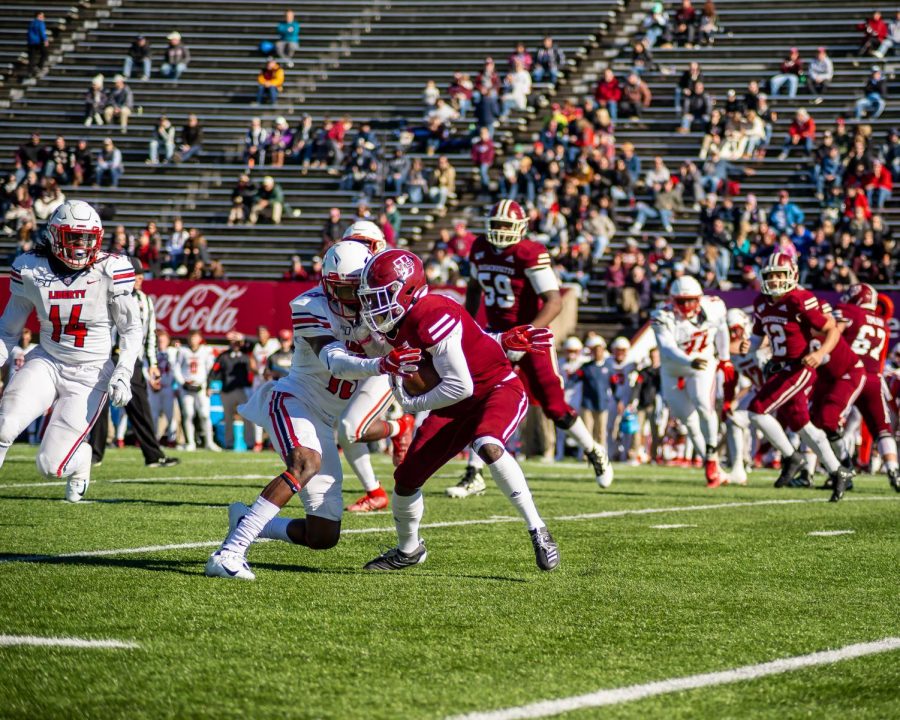 Despite keeping it close for most of the game, the Massachusetts football team finally caved on defense in the fourth quarter, allowing three touchdowns in the final frame en route to a 45-6 defeat.

UMass (1-9) gave up 136 yards in the fourth quarter, all on the ground, and Northwestern (2-8) salted away a 24-6 lead to start the quarter. Freshman Evan Hull ripped off 46-yard and 31-yard touchdown runs before redshirt freshman Raymond Niro III put the final nail in the coffin with a 15-yard touchdown with 5:36 left.

“We started to wear down in the back half of the game,” coach Walt Bell said to the Daily Hampshire-Gazette postgame. “Again, third down conversions having those really young and thin defenses for an extended amount of time. We go out in the second half, have one decent drive coming on and then after that it was three-and-out and those guys kept being left out there for extended amount of time. I just think the Big Ten football started to wear on us a little bit. I thought more toward the back half of the third quarter when we had to fight to keep in it, we wore down a bit.”

The Minutemen entered the red zone three times in the first 20 minutes but settled for three field goal attempts from kicker Cooper Garcia from short range. The second, a 30-yard attempt, was blocked and returned for a touchdown to give the Wildcats a 7-3 advantage 17 seconds into the second quarter. UMass cut the deficit to one with Garcia’s second field goal three and a half minutes later, but never regained the lead the rest of the way.

After the two field goals, the UMass offense sputtered again. The Minutemen finished the first half with two punts, then punted four more times in the second half to go with two turnovers on downs and an interception. On one particularly ugly drive, UMass lost four yards on four plays after recovering a fumble just outside the red zone and turned the ball over on downs.

All told, the Minutemen totaled 205 yards in the first two quarters and just 105 the rest of the way. Quarterback Randall West, making his first start since the second week of the year, finished 19-of-36 with an interception before getting replaced by Andrew Brito at the end of the third quarter.

“In a game like that where your defense is giving you the ball and you have a lot of opportunities, the game is close,” West said to the Gazette. “If you want to have a chance to win you really have to capitalize on those opportunities and we didn’t do that today. They got us on some looks but I thought most of them were self-inflicted, and a lot of that’s on me.”

The much-maligned UMass defense started out with an advantage over the equally-maligned Northwestern offense. Freshman Josh Wallace and redshirt sophomore Xavier Steele recorded interceptions on two of the Wildcats’ first three drives, and the defense didn’t allow points until Hull’s first touchdown of the day with just under eight minutes left in the first half.

After a shaky second quarter where UMass surrendered 143 rushing yards and 14 points, the Minutemen buckled down to start the second half. The defense gave up just 24 yards in the third quarter, while the Wildcats were only able to add a field goal after West’s interception gave them a short field. The offense was unable to take advantage, however, and the dam burst in the fourth quarter.

UMass will return home next week to face Brigham Young in its final game of the year.