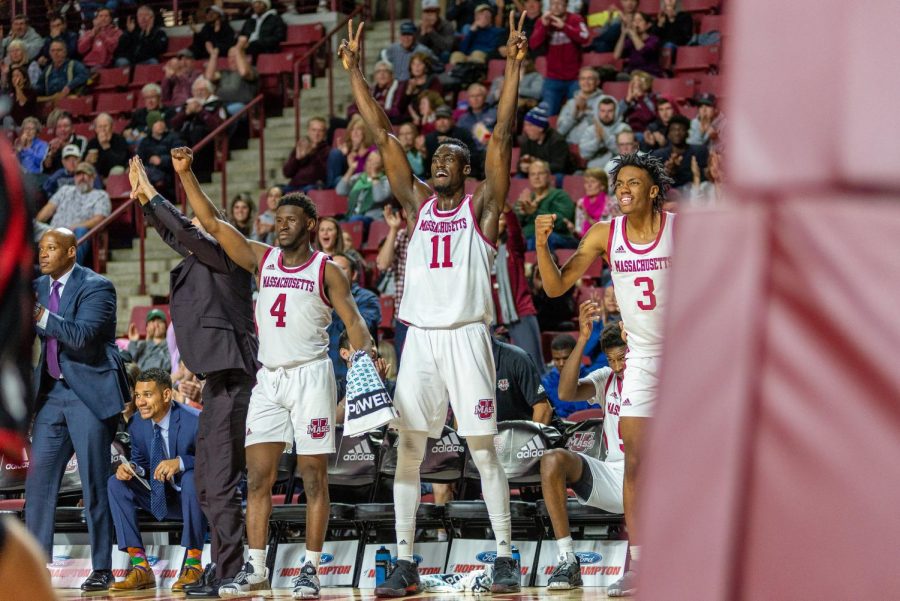 A second-half momentum swing propelled the Massachusetts men’s basketball team to an 80-71 home win over Northeastern.

“What a great team win,” coach Matt McCall said. “I’m really, really proud of our guys for just putting that game together. I thought our preparation the last two days in practice, our guys were locked in. I think they had a tremendous amount of respect for Northeastern.”

Offensively, the Minutemen started the game hot from the field. Freshman Tre Mitchell scored the first eight points of the game for UMass. His layup and back-to-back 3-pointers to open things were big for the Minutemen establishing the tempo on offense.

The first few minutes were sloppy from the UMass defense. The Minutemen allowed the Huskies to carve them up inside and that allowed Northeastern, specifically guard Bolden Brace, to get going from three.

Aside from a 19-18 lead with just over 10 minutes remaining following a layup from Sean East, the Huskies led for the entirety of the first half, up until the final seconds.

Speaking of those final seconds, East threw up a Hail Mary from about 80 feet and sunk it to put UMass up 36-34 at the half.

The entire arena exploded when the shot went in. East ran straight to the locker room and had fellow guard Keon Clergeot clinging to him and walk-on Davonte Higginbottom following in hot pursuit.

The shot swung the momentum completely in UMass’ favor.

“Really, I was just about to hold it,” East said. “But the coaches told me to try to score so I said, ‘Ok, I’m gonna let it roll as far as I can and then shoot it,’ and it just went in.”

The second half was a display of energy by the Minutemen, and the happy vibe was noticeable on the players’ faces. Even as the second half started and Northeastern drained a three to open things, those smiles never wavered.

The two teams traded baskets for a good stretch of the second half before TJ Weeks hit a three to push the UMass lead to four. After that, Carl Pierre hit a 3-pointer to extend the lead to seven, followed that with a free-throw make, and then hit another 3-pointer to give UMass a nine-point lead.

Pierre’s offensive burst was critical for the Minutemen, as they pulled away and never fell below a five-point lead for the rest of the game.

Another thing UMass did well was stop dynamic scoring guard Jordan Roland. Roland, who came into the contest averaging 40.5 points per game, finished with 14 points on 5-of-11 shooting from the field and 1-of-5 shooting from three.

“I thought they played him physical,” Northeastern coach Bill Coen said. “We couldn’t really free him up. Couldn’t get him to the foul line. They just kind of denied him the ball all over the court – and they had the athletes to do it.”

UMass will play the second of its three-game homestand on Saturday when it hosts Central Connecticut State at 1 p.m.