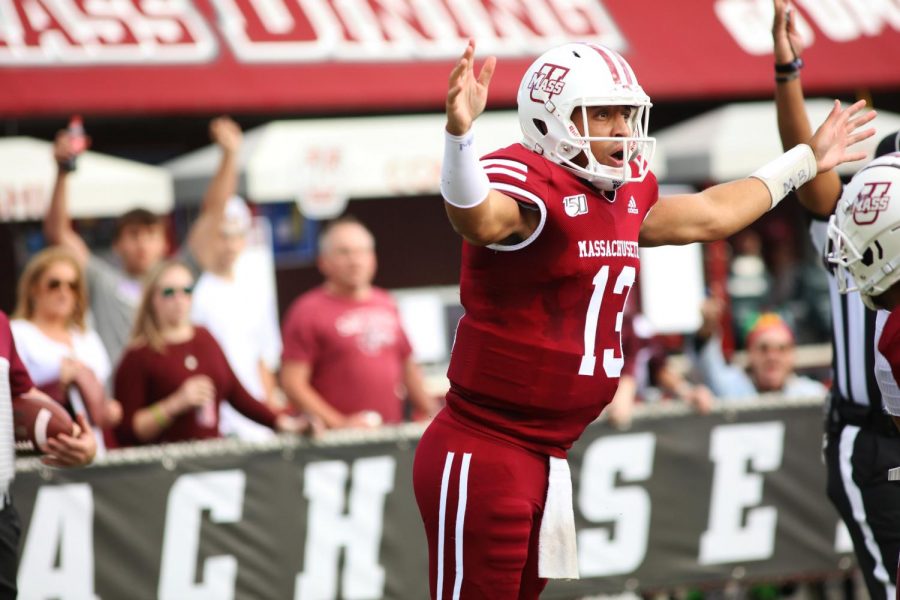 Before Saturday’s game with Brigham Young, the Massachusetts football team honored 11 seniors. Two hours later, one of them was taken off the field on a stretcher.

Cornerback Isaiah Rodgers, who holds the program record for career kick return yards, was cutting back across the field on a kick return when he slipped and took a shot to the head as he fell. For 10 minutes, play was stopped as the Minutemen gathered around and the Cougars knelt on the opposite side of the field.

“Lot of emotions in the air,” redshirt junior Bilal Ally said. “The feeling, the atmosphere totally changed. For me, it was very ecstatic emotionally, just going into that next drive on offense. I play with a purpose in the first place, but then I added to my purposes once Isaiah went down. It was just different.”

Although Rodgers was quickly cleared and ultimately discharged from the hospital before the end of the game, it was a sobering moment. For much of the year, Rodgers was the bright spot for the Minutemen, and all at once his UMass career came to an end, two quarters early.

Like much of the year, UMass got obliterated in the first two quarters, trailing 42-0 when Rodgers was hurt, but the Minutemen rallied in the second half and put up a much more respectable showing.

“When Isaiah went down, everyone knew that we had to play for him,” safety Martin Mangram said.
“He’s a brother. He’s been here with me since 2016. We just locked into our keys. We knew what they were going to do the whole time, and we just started making plays. We played for the seniors and we really showed that we wanted to be there, and played with passion in the second half. I’m really proud of the guys coming out the way we did.”

Rodgers’ injury was the main catalyst to give UMass new life Saturday, but after he saw his final game cut short, the Minutemen were also fueled by a desire to send the other 10 seniors out the right way. After a season focused on development and looking to the future, Saturday became about honoring the past.

Redshirt senior Randall West, in his sixth year with UMass after taking a grayshirt season as a freshman, led the charge on offense after Andrew Brito left with an injury, shaking off an early interception to lead the Minutemen to three second-half touchdowns.

“His production was good coming out of the second half,” Ally said. “I though the first drive didn’t go well, but once we started running plays that we needed, just focusing on the little details of our jobs, we were fine. Staying in there for pass protection, encouraging the offense to protect our quarterback, protect our guy.”

On the other side, Mangram led the defensive turnaround in his final game with the program, finishing with 10 tackles as the Minutemen allowed just seven points and under 200 total yards in the second half. As his career with UMass comes to a close, Mangram, an aerospace engineering major who finished his major in two and a half years and grad school in one, will head into a job at Lockheed Martin with the hope to someday work for NASA.

For the moment, though, it was a time to reflect on a football career that didn’t get to see a lot of wins.

“It’s bittersweet,” Mangram said. “I’ve spent three and a half years here, played in every game, seen a lot of guys come and go. To go out there in my last game and see how we came out in the second half really made me proud. I’m excited for what’s to come in the future, but I’m going to miss this. I’m going to miss the culture, miss these coaches and the way they care about us and really dove into us to help us grow.”

Although UMass won’t lose as much talent as last year, the hoped-for rebuild will depend in large part on the groundwork done by the seniors this year to prepare for a future they won’t be around for.

“I feel like this team really set the foundation of our culture,” Mangram said. “… I’m just proud of all the young guys that had to play even though they might not have been ready, [they] really stepped up. I think the team grew a lot from where we were in the beginning, all the guys that we lost, to where we are now. We grew, even though the results may not show that.”