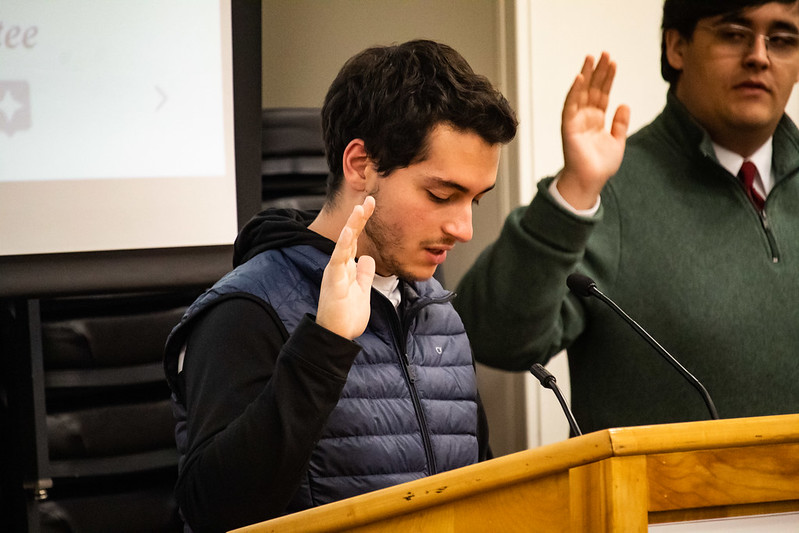 The Student Government Association denied a Center for Education Policy Advocacy appeal for emergency funding, and discussed the University of Massachusetts’ decision not to email the student body about a hate crime and learned about impeachment investigation procedure at a meeting on Wednesday night.

Rules and Ethics, a subcommittee of Administrative Affairs, outlined their plans for approaching the ongoing impeachment investigation into SGA President Timmy Sullivan by outlining several steps. They first plan to gather documents, which they have put several information requests in for. Next, the subcommittee will interview relevant parties, starting next week. The subcommittee then will deliberate on their findings and decide whether to bring impeachment charges to senate.

All subcommittee meetings will be open to the public to ensure  the SGA can be as transparent about the process as possible, said Liron Burstein, a senator on the subcommittee.

During the SGA meeting, the CEPA made a motion to appeal the finance committee’s decision not to give them additional funding for their Alternative Spring Break program.

The finance committee is responsible for granting additional funding to student organizations in the event of unforeseen circumstances. To qualify, these circumstances must be something that couldn’t have been allocated for in the regular budget put out by the Ways and Means Committee.

According to statistics reported in the meeting, CEPA received approximately $38,000 for funding for the 2019-20 academic year. Their current payroll is around $42,000; any additional money they raised this year has gone to the salary gap. The lack of funding is the result of campus-wide budget cuts implemented in the spring semester.

CEPA argued that these budget cuts were an unforeseen circumstance. Budget cuts do happen every year, but last year’s budget cuts tended to be higher than previous years.

“It’s not exactly the budget cut . . . but it’s the nature of this cut where it really put our organization in a difficult situation where we couldn’t really even cover our day to day expenditures,” said Jon Blum, the CEPA’s policy, legislative and research coordinator.

However, budget cuts have never been considered an unforeseen circumstance in the past, and several SGA members said that if they were to grant emergency funding to CEPA due to budget cuts, every student organization would be able to request emergency funding for that reason. A senate vote denied the appeal.

“The Finance Committee and SGA historically does not consider Ways and Means budget cuts to be an unforeseen circumstance,” said Moksha Padmaraju, the chair of the finance committee.

This decision will likely raise the cost of attending Alternative Spring Break for students. It currently costs $70, but could be raised to $200 or $300, according to Blum.

Sullivan also expressed his disappointment in the University’s decision not to email the student body about a hate crime that took place on campus on Wednesday, Oct. 30, when five large swastikas were discovered on the outer wall of the Fine Arts Center.

“The University issued a statement. Unfortunately, they determined that they would not email the entirety of the campus, which I found quite upsetting,” said Sullivan.

“The University did not want to overwhelm students with unsettling news,” said Sullivan.