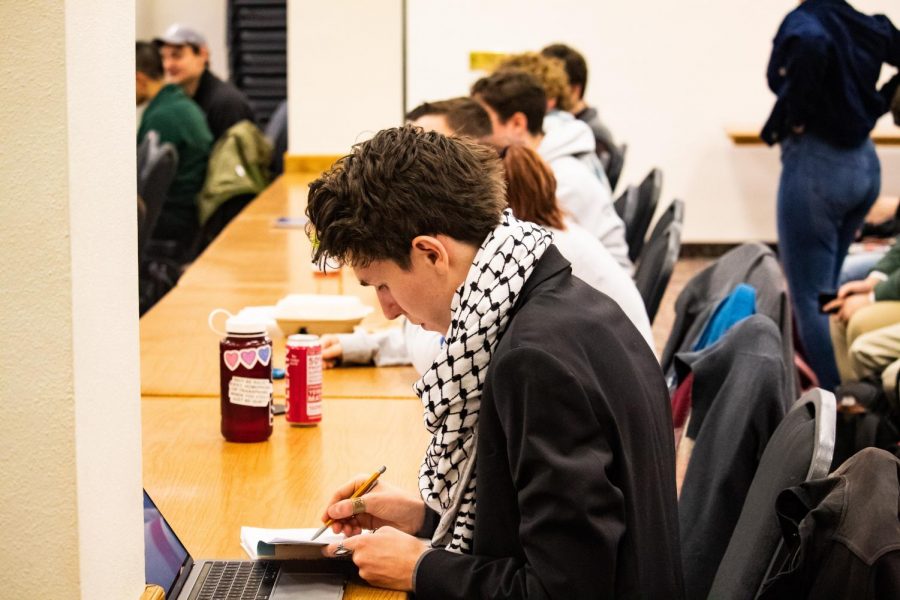 By Kathrine Esten and Sophia Gardner

As the impeachment investigation of Student Government Association Timmy Sullivan continues at the University of Massachusetts, the rules and ethics subcommittee initiated the interview process procedure at a meeting on Friday night.

The subcommittee is required by SGA bylaws to issue a report on their investigation by Nov. 26. As of Nov. 13, the investigation has 13 days remaining. Within two weeks of submitting the report, the subcommittee will vote on whether to submit impeachment charges to the SGA senate.

Discussing the main areas to investigate, the subcommittee determined interviews would focus on what the president was doing to fill open cabinet positions, whether Sullivan’s reported hours were unethical and if reporting additional hours was “common practice” in the 2018-19 cabinet.

“Specifically, with regards to embezzlement,” Turley said, “that was something that we shouldn’t be thinking about [because] we don’t know anything yet.”

Turley added, “We have to go on with the presumption that this, these charges, we don’t know. We’re looking into them. The president [Sullivan] is innocent until proven guilty.”

In response to a records request, UMPD stated there are no reports in their system involving Timothy Sullivan and misappropriation of funds.

Concerning potential violations of rules, the subcommittee spoke about the two “non-appointments” of Vice President and Secretary of Technology in the spring 2019 semester and whether Sullivan fulfilled the responsibilities of these open cabinet positions.

According to Title III, Chapter 9, Section 1 of the SGA bylaws, the president, in the event of a cabinet vacancy, shall submit a named representative to the senate within 30 days. The secretary of technology position became vacant in October 2018 and Vice President Nathalie Amazan officially resigned on Feb. 5. The positions were filled when Sullivan, Latimer-Ireland, current Secretary of Technology Timothy Nguyen and the rest of the executive cabinet were sworn in on April 1.

Subcommittee members referenced an SGA meeting on March 4, where Sullivan said in his officer report that he had the flu and had been unable to meet with people the previous week, but planned to send emails to the candidates who applied for the vacant vice president and secretary of technology positions.

“There were two for each [position],” Sullivan said in March. “So I will be notifying them of a time to meet.”

Sullivan told the Collegian in October there were no applications for secretary of technology and only one application for vice president, Hayden Latimer-Ireland. He also told the senate the same thing at their Oct. 30 meeting.

Sullivan said at the time that he made a decision about “logistics and timing.” He stated that by the time the application and interview processes were complete, a nominee would have been brought before the senate during the March 25 meeting, only a week before the new administration was sworn in and the hiring process would begin again.

“I figured it would be a lot of peoples’ time for what would only be a couple days of service for [the vice presidential nominee],” Sullivan said.

The subcommittee also mentioned a meeting on Feb. 4, when a senator suggested using the extra funds from an open secretary of technology position to get iClickers, noting it should be included in the investigation. Concerning Sullivan, the subcommittee said a focus of rules violations was to determine who was doing technology-related work, including work on the SGA website, and whether the senate’s constitutional rights were abridged.

“Timmy does have the responsibility to make sure the jobs of the vacant positions are being done,” Turley said. “However, after Hayden joined, and after we got a new Secretary of Technology, he was still overreporting.”

Secretary of Public Relations and Recruitment Wai Cai did some work on the SGA website in the absence of a secretary of technology, according to Ivory Moulton, Chair of Outreach and Development Committee.

“I’m interested to see if Timmy kept up the website too, or if they [Sullivan and Cai] were ever in contact [with one another] about what they were doing with that,” Moulton said.

The subcommittee also addressed alleged violations of ethics brought up by the petition. The conversation focused largely on Sullivan receiving more pay than stated in initial budget allocations.

Members of the subcommittee discussed allocated hours for certain cabinet positions which restricted overtime. Turley stated that only Sullivan and former Secretary of Sustainability Alexia Perides were allegedly the only two cabinet members who did not follow this limit.

Sullivan described the act of claiming additional hours because of increased work as “normal and procedural” in an Oct. 30 Senate meeting.

“If this is so dramatic and procedural, how come we only see this twice [in the cabinet], once with the president, once with Alexia?” Turley asked at the Nov. 8 meeting.

“Members of our committee would like to interview you as a part of our fact-finding process,” the email read. “We plan to audio-record the interview so all members of the subcommittee may be able to hear what was said.”