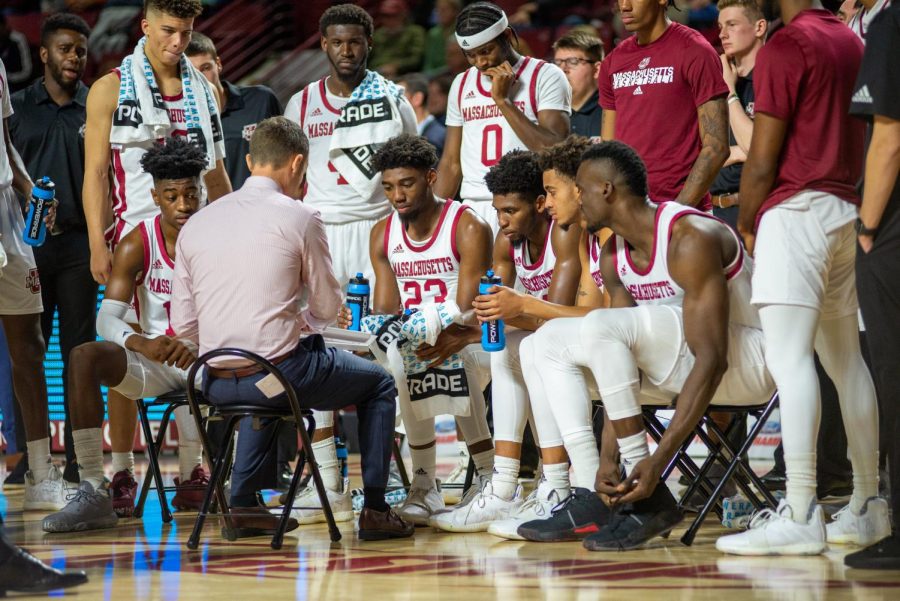 First of all, welcome to Starting Five: every few weeks I’ll be doing a column picking out five things to talk about from the last week or so of the Massachusetts men’s basketball team’s various happenings, with some film to accompany things. It won’t be every week, because obtaining film really just depends on which games are available afterward and which aren’t, but it should be at least once or twice a month.

UMass opened up the 2019-20 season with a 79-64 win over UMass Lowell on Tuesday night, pulling away in the second half of an exciting game at the Mullins Center. The Minutemen (1-0) showed some real flashes, particularly on the defensive end, with some impressive hustle plays, a disruptive press and a collective effort we haven’t seen in some time.

There’s a lot to parse through in the film: here are a few (mostly) highs and lows from opening night.

Matt McCall was raving about Weeks before the season, and it’s pretty clear why: the freshman guard finished with 23 points on 8-of-12 shooting on Tuesday, meeting expectations and then some on opening night.

With Lowell clawing back into the game, Weeks stepped up and drilled back-to-back threes in crunch time to put the River Hawks away, the highlight of the night.

Those are well-contested shots, and impressive on their own; to have the confidence to fire off those shots without hesitation in the last three minutes of your first collegiate game is ridiculous.

We all knew Weeks could shoot. The question with him was the other stuff, both off the bounce offensively and on the other end. It’s really promising that, once Lowell started to respect his shooting like Josh Gantz does here, Weeks takes advantage and dusts him on the way to the hoop.

As for the other end, so long as Weeks can grab a few rebounds and make a few defensive plays like this one, he’ll be just fine.

As McCall said Tuesday, sometimes the ball’s going to go in, sometimes it isn’t. Weeks can shoot like hell — but if the other parts of his game continue to come along, he’ll be a really solid player even on off shooting nights.

I wanted to have another item titled “TJ Weeks, Carl Pierre and friendship” but ran out of space, but please enjoy this clip of Weeks and Pierre being friends because I enjoyed it and I’m all for on-court friendships.

I was really impressed by East’s instincts at the point guard spot on Tuesday — 11 points and six assists with no turnovers speaks for itself, but his feel for the role, something UMass has lacked throughout McCall’s tenure, was really impressive.

East can sort of dictate the pace of the game on his own, and he’s surprisingly comfortable one way or the other. He had some moments like this one where he grabs the outlet pass and takes off, catching Lowell sleeping and getting inside for a layup:

And while he can be extremely aggressive like he is above, he’s also capable of real patience. Tre Mitchell was slipping a lot of pick-and-rolls, and when Lowell chose to hedge like Connor Withers did here, someone had to account for Mitchell — East recognizes the chaos, holds a beat to keep the defense moving right as Carl Pierre gets free, and then swivels left and hits Pierre for an open three.

Then there’s this 3-on-2; with how aggressive East has been in the open court, you’d expect him to drive hard to the hoop. Instead, he slows down, drags a defender down, seals him and swings it to Pierre for another great look from deep. Pierre missed it, but UMass will take this look every single time, and it came from East’s patience.

For a freshman point guard, East was so steady on Tuesday. This is really impressive craft for a guy in his first collegiate game. The Minutemen haven’t had a true point guard like this in years, and I think the starting job has to be his to lose.

If I were to put a bunch of gifs here of all the hustle plays UMass had last night it would take up like half this story, so here’s just one long clip putting together some of my favorites.

Taking charges, diving for loose balls — that first clip of Samba Diallo diving into the bench for a loose ball that seemed like a lost cause to give UMass an extra possession was a highlight of the night. This team plays hard, and the crowd really responded to that last night. Like I said: they may not be good, but they’ll play hard, and they’ll be fun.

Focusing on the defense, here’s a quick look at the numbers: UMass finished with seven blocks and 11 steals, forced Lowell into 18 turnovers and held the River Hawks to 38 percent from the field. That’s solid stuff.

I could do a whole column about the defense and the full-court press so I’ll be brief here, but the press is really coming along, both in forcing some turnovers and disrupting the flow of an opponent’s offense.

This clip is everything UMass wants: a turnover forced by the press, and an easy basket. This never happened last season.

I’m also going to do something weird — to illustrate how solid the Minutemen were defensively on Tuesday, here’s a clip of the River Hawks hitting a three:

It’s a made basket, but man, they had to work for it. Everyone’s engaged, they’re rotating, they’re switching when they need to; there were one or two spots where someone got lost for a half second, but that’s only going to get better. I think this team has a huge ceiling defensively, and Tuesday was only the start.

So, Tuesday wasn’t Mitchell’s best night. Lowell was double-teaming him from the jump, and I think he was pressing a bit and clearly got a little bit frustrated when the ball wouldn’t drop. He finished 3-for-11 on the night, 0-for-3 from deep, and I’m sure he’s not thrilled with his own performance. But you can still see the immense talent.

To have a center that draws so much attention, that commands double-teams, is a plus on its own. When that center can space the floor, beat a man off the bounce, pass out of double teams and defend multiple positions, you’ve got a real asset.

Mitchell had his moments, and he makes certain things, like this left-handed jump hook, look like the easiest thing in the world.

Mitchell’s going to be just fine. When those shots start falling, he’ll be a force.

I really like Samba Diallo. I think he’s going to be really good. But a guy that shot 23.5 percent from deep last season, and whose misses tend to really miss like they did on Tuesday, probably shouldn’t be throwing up a couple threes a game.

Having the previous point on its own just felt sort of mean, especially because Diallo was really good on Tuesday, so I’ll also throw in one of his drives to the basket.

That’s some grown man stuff, and he did that a couple times against Lowell. Diallo remains such a raw talent, having only played the game for a few years but possessing some physical advantages that very few players have — with his length and finishing ability at the basket, there may be few wings in the conference that are as difficult to stop going to the basket as Diallo could be. Throw in his defense and his effort, and he’s a huge piece this season.

Yeah, I lied about it being five things. It usually will be, but it’s opening night, there’s a lot to talk about!

It felt wrong to talk about Tuesday night without bringing up the bench reaction, so here are two of my favorites. First, the bench jumping with Diallo as he threw it down on the break was fun:

And secondly, the reaction to this dagger three from Weeks — please pay special attention to Djery Baptiste, and John Buggs’ dance moves later in the clip.

Tuesday night was fun. This team could be really fun. They play hard, they seem to like each other and there’s a lot to like about them. I’m looking forward to it.