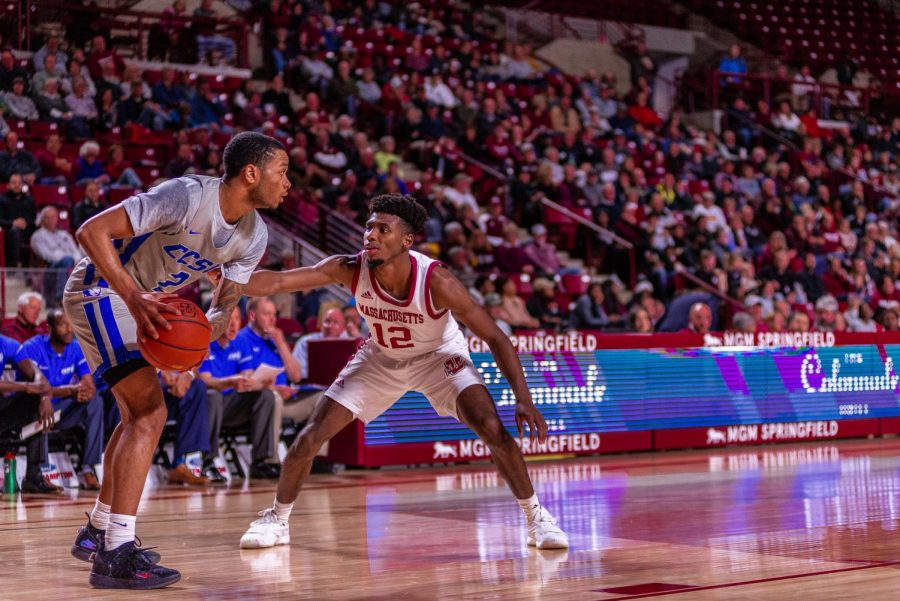 Saturday was a take-care-of-business sort of game, and the Massachusetts men’s basketball took care of business.

UMass (4-0) rolled to an 89-43 win over Central Connecticut State at home to stay unbeaten through four games, holding the Blue Devils to just 33.3 percent shooting from the field and forcing them into 24 turnovers in a 46-point win.

“I thought it was a great defensive performance,” said UMass coach Matt McCall. “I mean, we held them to 18 points in the first half. I was really pleased with our defense. I thought our offense was not great in the first half, again, but I thought defensively we were terrific.”

Keon Clergeot led all scorers with 20 points, while Sean East added 15 points and six assists and Samba Diallo pitched in 13 points and six rebounds of his own.

The Minutemen jumped out to an early 18-9 lead, quickly establishing the press defensively and jumping on loose balls. UMass forced 15 turnovers in the first half alone, leading to 15 points from those turnovers and a 39-18 lead at the half.

“All week, the front guys, we met with [assistant] coach [Tony] Bergeron and studied film on the press,” East said. “And it worked in practice and it translated into the game.”

UMass led by 21 at the half without much production from its two leading scorers — Tre Mitchell was held without a point in the first 20 minutes as he dealt with foul trouble, while TJ Weeks missed his first three triples and had just four in the first half.

“Tre was in foul trouble,” McCall said. “He was in foul trouble the whole game, and I really tried to establish him offensively, but they did a good job with him early and they doubled him a little bit there, and that’s the one he found Keon in the corner, you can see how good a passer he is. I thought TJ had some wide open looks in the first half to blow the game open even more and he just missed them.

“I don’t worry about either one of them, they were both so excited and happy on the bench cheering for their teammates.”

Diallo, who’s raised his offensive production from just 3.5 points a game last season to an even 10 through four games, continued to establish himself inside and out on Saturday. He hit a corner three in the first half to take him to nine, and fought through contact inside in the second half to grab a pair of offensive rebounds before laying them back in.

“I’ve liked what I’ve seen out of Samba for a while,” said McCall. “He can impact the game in so many different ways, arguably our biggest win last year was a game against Providence where he was in there for 30-plus minutes probably. He’s just so tenacious, he comes with the right mentality and he’s a joy to be around too.

“He was busting my chops last night because someone said something about me delivering pizza to the dorms, and he started calling me the pizza guy. His approach has been terrific, and I said to him last night at practice, how’s your body feeling, how are you feeling health-wise. ‘Coach, I feel great.’ He’s so wiry, strong when he gets in there with his offensive rebounds.”

The UMass lead stretched to 30 points midway through the second half and ballooned over 40 in the final few minutes, as the Minutemen took advantage of a weary CCSU team that was not done any scheduling favors this week. The Blue Devils took a 41-point beating at Arizona State on Thursday, having to turn around and face an energetic pressing team in UMass on the other side of the country just over 36 hours later.

“I think Central Connecticut was put in a very difficult position to have to play that game on Thursday night and lose all that time coming back, and travel here today, that’s not an easy thing to do,” McCall said. “But I give our guys a lot of credit for coming in with the right frame of mind and the right mentality.”

As the Minutemen wrapped up a blowout win, the celebrations were brought to a screeching halt when freshman John Buggs went down screaming and holding his right knee after a jump stop in the lane. The energy in the building vanished, as one of UMass’ most beloved bench presences had to be helped to the locker room by McCall and trainer David Maclutsky.

“Buggs is hurting right now, a little bit, he’ll be evaluated by our doctors and we’ll get a diagnosis probably by Monday, but that was hard,” McCall said. “To see him in that much pain, go down like that, kind of sucked the life out of the gym. Everybody was in a good mood, the fans, the team, and John Buggs, what he brings each and every day, his mood, his attitude, his positivity; he’s a guy you love being around.  And you see a guy go down like that, in that much pain, you genuinely feel for him and it just kind of sucked the life out of the gym.

“It’s unfortunate, and we’ve got a great medical staff, and they’ll get with him here and hopefully he’s okay.”

Buggs managed to crutch his way back to the bench in the final moments with ice taped to his right knee, sitting between Weeks and Carl Pierre and continuing to cheer on his teammates. East, Buggs’ roommate, was especially emotional postgame.

“That was the first person I met when I got here in the summer,” said East. “That’s my brother. He did it in prep school and he had to come here and sit out like eight weeks, and now he hurt it again.

Still-unbeaten UMass now turns its attention to Wednesday, as the Minutemen will host Rider at 7 p.m.