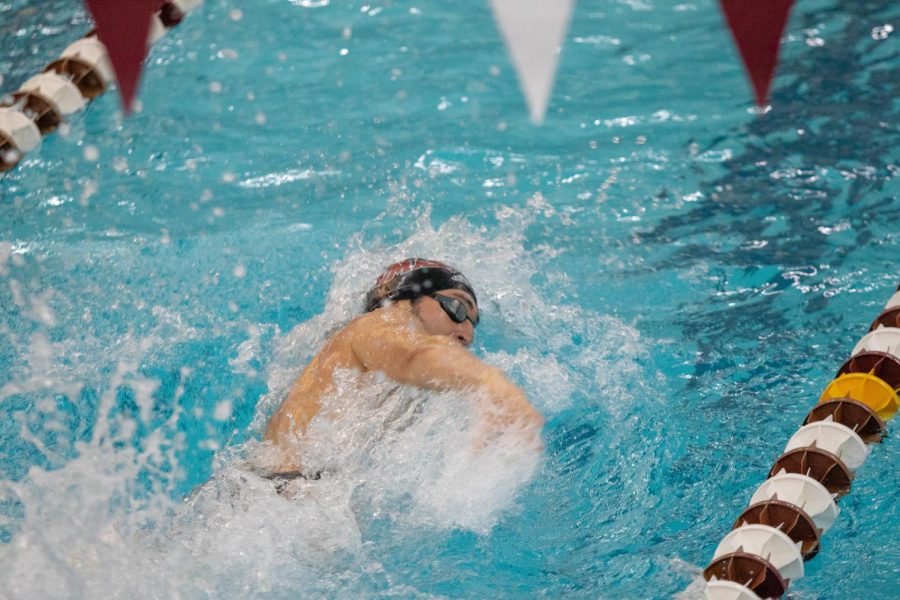 In what was expected to be a preview of the Atlantic 10 championships, the Massachusetts women’s swim team came in fifth but showed promise looking ahead to the conference tournament in February.

Although UMass (4-2) finished in fifth place, coach Bob Newcomb walked out of the weekend feeling good about where the Minutewomen are.

“It was a really good weekend,” Newcomb said. “With the atmosphere they created and the finish they had, they were relaxed and they enjoyed themselves.”

The Terrier Invitational was the first time both teams had to swim for three days in a row, but Newcomb was impressed with how the Minutewomen did, regardless of longevity.

“It was tough, they were exhausted,” Newcomb said. “I just have so much respect for this team, what they put in over this fall semester and how they responded. It was just a great team effort. There was endless warming up and warming down and getting their bodies going when they’re sore and tired, and they still got up and did what they had to do.”

The Terrier Invitational has a similar format to the A-10 Championship in February, although the A-10 Championship is slightly longer. As such, the Terrier Invitational serves as an indicator to see where UMass stands at the midway point of the season. But the looming winter break will disrupt the second half of the season and put more pressure on the swimmers to maintain the same level of training.

“We have been so consistent training over the first 11-12 weeks, but now between finals and vacation, we’ve got gaps and they have to step up [in these breaks],” said Newcomb. “If they do, we’re good. If they don’t, it’s going to be hard.”

Two freshmen for the Minutewomen had the highest finishes on the team, as Bella Snyder finishing third in the 1650-yard freestyle and Katie Mitchell came in fourth in the 200-yard butterfly.

“She brings in a great work ethic to the distance group,” Newcomb said of Snyder. “She just adds into the culture and the training and attitude that the group has.”

Junior Kelly Malyszka, who finished no better than fourth but set a lifetime best in a 10th-place finish in the 200 yard freestyle, did not have an Invitational that stood out on the leaderboards, but caught Newcomb’s attention.

“She stepped up in every event she swam,” Newcomb said. “What she swam on the second day (400-yard individual medley, 200-yard freestyle) is really tough, and she was just stunning. Then she got out and had another 200 [in the 800-yard freestyle relay] and swam even faster. She was great.”

The Massachusetts men’s swim team took home third place in its midseason test at the Terrier Invitational, with notable finishes from Al Madden and Jamie MacDonald propelling the Minutemen.

Madden won the 100-yard breaststroke, while MacDonald finished second in the 200-yard butterfly and fifth in the 200-yard individual medley. The Minutemen also won the 200-yard medley relay, which included Michael Tartakovsky, Madden, Will Munstermann and Ryan Pedrick.

Sophomore Sanjay Sekar and freshman Colby Vieira caught the eye of coach Russ Yarworth even though their names didn’t show up at the top of the leaderboards.

“Sanjay had lifetime best in every single race he swam, and he’s been working really hard to change his body. He’s stronger, more fit, he’s focused, which is really nice to see,” Yarworth said. “Colby’s brother [Kyle], who swam for us, came to watch him swim the [1650-yard freestyle] and Colby knocked 46 seconds off his best time.”

Although UMass did not come out with a tournament win, Yarworth was pleased with the results.

“Everything we’ve been doing has got us pointing in the right direction,” Yarworth said. “Team culture, team effort, team performance were fantastic, and shows that maybe just maybe this old coach and his assistant are doing the right thing.”

The swimmers are off until Jan. 17, when both teams will head to Bryant to face the Bulldogs. The divers have a meet at Bucknell on Dec. 6.