The Minutemen needed a win, and they found a way to get it done on Saturday night 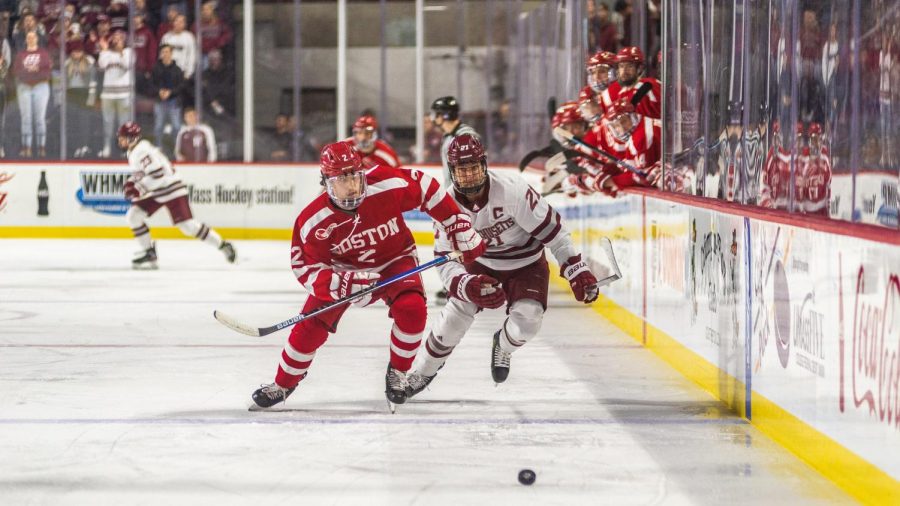 The Massachusetts hockey team really needed that one. As far as must-win games in the first half of the season go, that was about as close as it gets.

After dropping below .500 in the early stages of Hockey East play after Friday night’s loss, the Minutemen (7-3, 3-3 HEA) were in desperate need of a bounce back effort on Saturday, and they got it.

Returning to the Mullins Center for a rematch with Boston University, No. 5 UMass carried over its resilient effort from the third period on Friday night and got the job done – securing a 4-1 victory, snapping a two-game losing streak and grabbing two instrumental league points in the process.

After falling to New Hampshire on Sunday and coming a goal short of completing the comeback at Agganis Arena in their first matchup of the weekend, it was a much-needed win at home.

In such an important early-season game, someone had to step up, and it was Mitchell Chaffee that rose to the occasion. With two goals, Chaffee led the charge to remain undefeated (6-0) on home ice.

“He’s one of the best players in the league,” Greg Carvel said after the game. “He’s a power forward who can score and he’s a game changer, he can play physically and for a kid that big, he’s a goal scorer.”

When the Minutemen needed him most, the junior co-captain came up big in several areas of the ice. For starters, Chaffee granted UMass an early 1-0 edge near the end of the opening period. Then, tied one-all midway through the third, he made a smart play to win possession of the puck and then buried the game-winner unassisted. Overall, his looming presence and physical play set the tone on the ice.

“We’ve been here before,” Chaffee said. “We had full faith in our team coming into the third period as it was tied. We didn’t have any doubt, so it was big for us to go out there and finish.”

With the Terriers (3-4-4, 2-3-3 HEA) looking to break out of their zone in the third period, Chaffee anticipated the pass and intercepted it, before firing a shot in front of three defenseman that beat BU netminder Sam Tucker and opened the door for two more third-period goals to solidify the victory.

“I kind of knew that he was going to try and go cross-ice,” said Chaffee, who leads the Minutemen with nine goals this season. “Kind of fanned on the first one but it ended up going in the second time.”

For the second-straight night, UMass scored three goals in the third period. It’s not the first time they’ve gone into the final frame knotted up with their opponent and blown it open this season.

“I just think the way we train our guys, both mentally and physically, is so that at the end of the game we rise to another level and try to elevate higher than our opponent and really take games over,” Carvel said. “It’s a sign of a mindset for our guys and we try to keep them fresh. We like going into games tied in the third period because we think it’s an advantage for us.”

Leading into the weekend series, the Minutemen were looking to up their compete level. After outshooting the Terriers 92-39 across the two games, they accomplished that goal, Chaffee said.

“I felt like we took a big step this weekend,” he said, “and I felt like our compete was very good in both games, no matter what the score was, so we’re looking to build off that and continue it.”