UMass basketball tops Rider to stay undefeated on the season

Weeks and Pierre combine for 44 points 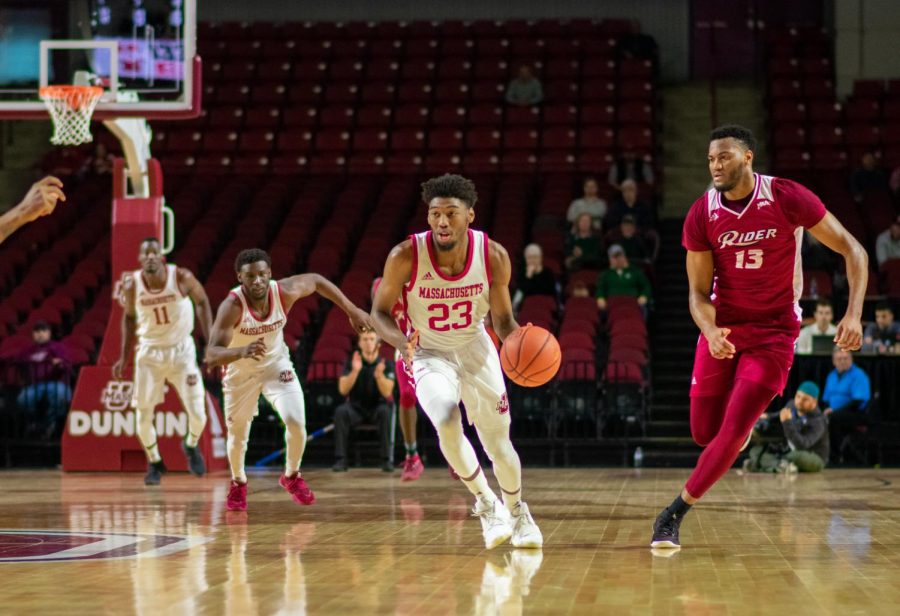 5-0 has a pretty good ring to it, and for a team starting the season undefeated for the first time since 2013, it’s definitely a step in the right direction.

The Massachusetts men’s basketball team came out on top against Rider on Tuesday night, staying unbeaten in an exciting 82-72 win.

The Minutemen came out hot, and even that’s an understatement — the sharp shooting of Carl Pierre and TJ Weeks once again led the Minutemen to victory, as the two combined for 44 points. UMass has started slow at times in the first four games, but that wasn’t the case Tuesday — in the first half, UMass shot 60.7 percent from the field to go along with 56.3 percent from deep, a complete turnaround from how it’s started in recent games.

“The way we want to play it’s going to be someone different every night,” UMass coach Matt McCall said. “I told our team there at the half, I was pretty disappointed with how we finished out the half, we had a 17-point lead with three minutes to go, they cut it to 11…. when [Pierre and Weeks] are on, we’ve got to continue to find them.”

It was a slow scoring start for freshman Sean East, who finished with only two points at the half, but he dished out six assists. His ability to find the open man on the court was huge for the Minutemen, and finding the hot hands of Pierre and Weeks in the first half made all the difference. East finished with 10 points and eight assists on the night.

Weeks finished with 21 points, going a perfect 6-of-6 from beyond the arc. Knockdown threes from Weeks in the first half electrified the UMass bench and got the Mullins Center into the game. His 17-point first half helped UMass take a 45-34 lead into the break. 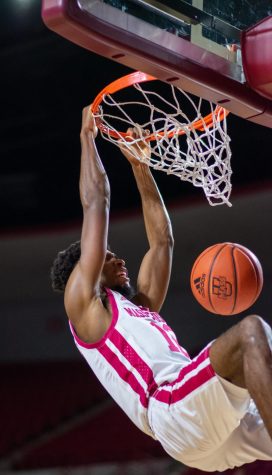 “Just to come out strong, if they keep calling my name I’ll find a way to finish,” Weeks said. “If the defense pulls out on me then I know Carl is wide open, or Tre [Mitchell], or Sean, or Keon.”

The Minutemen got off to a hot start in the first half, but quickly saw their 11-point halftime lead simmer down to just six at various points in the second half. The man to stop for Rider was center Tyere Marshall, who finished with a game-high 28 points on 11-of-17 shooting from the field. The center finished with a monster double-double, picking up 20 rebounds on the glass.

“We probably should’ve looked at doubling [Marshall] more,” McCall said. “With how the floor looks I was a little bit nervous about giving up threes.”

In the second half the Minutemen saw themselves up by as much as 17 with 6:43 to play, and from that point forward they were cruising. Contributions from Samba Diallo, who finished with a near double-double with 10 points and nine rebounds, along with 10 second-half points from Pierre helped UMass close out the win and move to 5-0.

With defending national champions Virginia on the schedule for Saturday, UMass has a chance to make some noise this weekend, but the Minutemen are still taking it day by day.

“I’m having lots of fun, everybody is connected and together, but I think the big key for us is not trying to get too high or low,” Pierre said. “I mean we keep saying after every game, we go right back to the bottom of the mountain and we are trying to climb back up and get another win to keep it rolling.”

The Minutemen face their toughest challenge yet of the season when they square off against the reigning national champion Cavaliers on Saturday. Tip-off is scheduled for 12 p.m. at Mohegan Sun Arena.

“As our ops guy Brian Grossman says,” McCall said, “what an opportunity.”