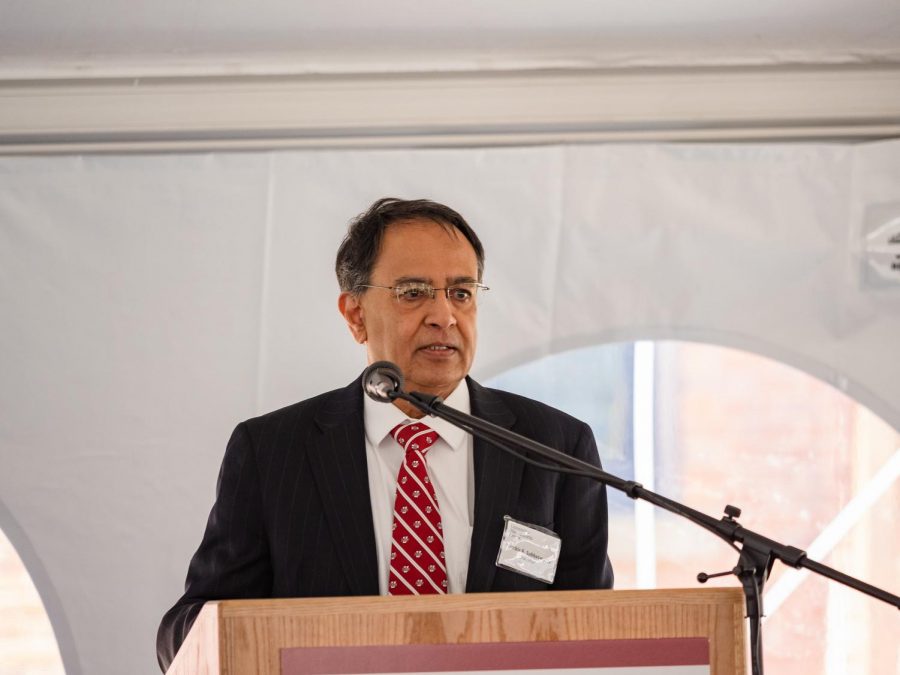 Following University of Massachusetts Chancellor Kumble Subbaswamy’s statement on a controversial on-campus event, “Criminalizing Dissent: The Attack on BDS and American Democracy,” many students and faculty are now responding to the chancellor.

Scheduled for Nov. 12, the event will feature a panel discussing the treatment of the Boycott, Divestment and Sanctions movement, a group which aims to politically pressure Israel to change its policies in Palestine. It will be hosted by the Media Education Foundation – run by UMass communication professor Sut Jhally – and the UMass Resistance Studies Initiative.

In his Oct. 21 statement, Subbaswamy expressed his disagreement with the event’s goal and said “the University remains firmly opposed to BDS and to academic boycotts of any kind.”

“Academic boycotts are antithetical to academic freedom and it is ironic that individuals, who rely upon that very freedom to make their case, should advocate for a movement, in BDS, that seeks to suppress it,” the chancellor’s statement read.

In response, over 120 UMass faculty submitted an open letter to Subbaswamy, expressing their “deep disappointment and dismay” at his perspective. Amongst other points, the faculty letter took issue with Subbaswamy’s characterization of the event as “troubling,” “one-dimensional” and “polarizing.”

Included on the panel are activists Linda Sarsour, Shaun King and Tim Wise; Harvard University professor Cornel West; Dima Khalidi, founder of a Palestinian rights group; and Omar Barghouti, a founding member of BDS. Barghouti, who was denied travel to the United States last spring, will appear via Skype.

In his statement, Subbaswamy was critical of this lineup and felt the group holds demonstrably one-sided views on the topic at hand. Sarsour, for instance, has faced previous allegations of anti-Semitism, and stepped down from her chairship of the Women’s March amidst related controversy.

“A panel discussion where only one perspective is shared does little to increase the understanding of such a complex topic like the Israeli-Palestinian conflict,” Subbaswamy wrote. “We must step outside our own echo-chambers and encourage the free exchange of ideas.”

The faculty response letter also stressed their belief that when Subbaswamy questioned how the event would make Jewish students feel, he was ignoring the feelings of many non-Jewish students.

“While we acknowledge the often strong feelings of Jewish students on this issue,” the faculty letter read, “how are Palestinian students, other students of color, and Muslim students, many of whom see a genuine connection between struggles for equality and dignity in the United States and the Palestinian struggle supposed to feel when the chancellor demeans the voices of leading civil rights leaders, including Angela Davis, Linda Sarsour, and Cornel West?”

Despite his disagreement with the event, Subbaswamy was clear that the school has no power to prevent the event from happening on campus.

“As a public institution UMass is bound by the First Amendment to the Constitution to apply a content-neutral standard when making facilities available to outside organizations,” Subbaswamy said. “For this reason, and in adherence to the principles of academic freedom, the University will take no steps to inhibit this event.”

Reached for comment, UMass Hillel sided with the chancellor and expressed its dismay that the campus “is again being used as a platform for a high profile provocative anti-Israel event,” which they called “the latest in a series of similar events over the past few years.”

Hillel said that these events, such as last spring’s panel on Israel and free speech, paint a “reductionist and dehumanizing portrait of Israel.”

Like Subbaswamy, Hillel noted the one-sided nature of the event given the intricacy of the topic it covers. “[The Israeli-Palestinian Conflict] presents serious challenges and is fraught with emotions for those who care about it. Higher education should support our future leaders to grasp complexity and multiple viewpoints.”

Hillel’s statement also described the organization’s goal of “empowering [Jewish students] to express their values and identities while respecting the diversity of student experiences and opinions.”

The UMass branch of Students for Justice in Palestine issued an open letter of their own to the chancellor in which they asked that he retract his statement. The letter made a variety of claims addressing Subbaswamy’s statement and laid out the organization’s views on BDS and why they believe events like this one should be allowed.

“Clearly, the divisions among Palestinians and Israelis represent one of the intractable problems of our times, and we acknowledge the suffering that exists on all sides,” Subbaswamy wrote toward the conclusion of his statement. “When outside organizations come onto our campus and give a high-profile platform for one-sided and divisive political positions that some view as deeply offensive, they are saying to valued members of our community that they don’t belong.

“This is the antithesis of our commitment to inclusion, and we will not hesitate to speak out against efforts to divide our campus community.”