Second half energy not enough to make a difference 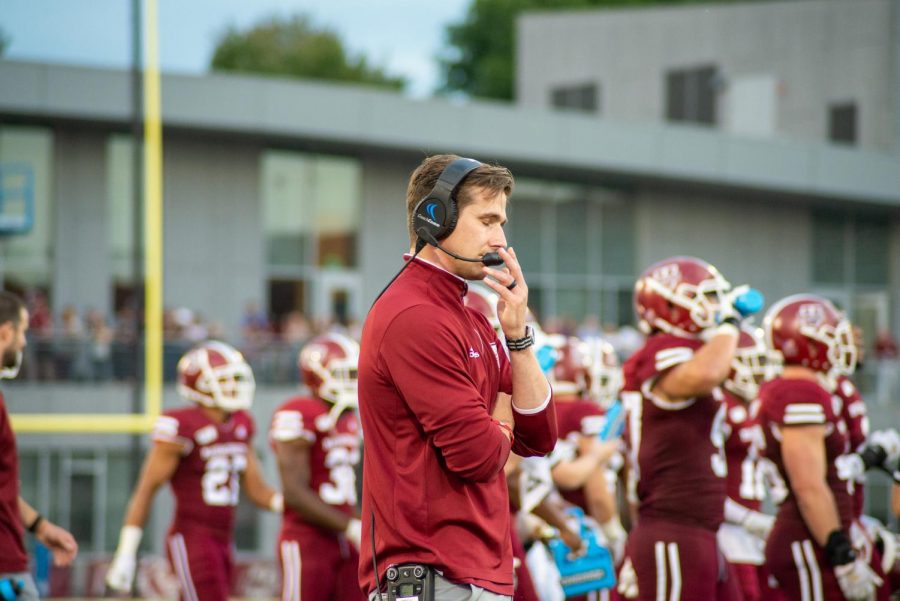 Trailing by just seven after the first quarter, the Massachusetts football team gave up 42 points in the second for a 49-0 halftime deficit en route to a 56-24 loss to Brigham Young. With the loss, UMass fell to 1-11 on the year.

“Tough year, but I think the biggest thing, especially heading into Thanksgiving, is how grateful I am for all the kids and everything that they’ve been through,” coach Walt Bell said. “Especially those guys that are fifth-year seniors and have been here… And those 11 seniors that were out there today, those guys, from a winning-losing standpoint, had a really tough four years of college football.”

It was a reversion to the worst of UMass (1-11) in 2019, with sloppy tackling, failure to get off blocks and a truly atrocious offense crippling the Minutemen. The worst scoring defense in history – allowing 52.7 points per game in 2019 – saw its season epitomized on a 44-yard touchdown run by Jackson McChesney, who went straight up the middle for several yards before contact and then ran through three missed tackles on the way to the end zone.

McChesney finished with 228 yards and two touchdowns, while the Minutemen allowed 320 yards rushing to bring their season average to 299 per game.

“They were scheming us up pretty good on some run plays,” safety Martin Mangram said. “Holes were opening up that we weren’t expecting. They were blocking it different than we had practiced, so they got some open holes.”

On the other side of the ball, UMass amassed just 26 yards of offense on 16 plays in the first half. Redshirt sophomore Andrew Brito got the start and was unable to move the ball, exiting in the second quarter after a hard sack left him cradling his arm. Redshirt senior Randall West came in and threw an ugly interception to set up BYU’s sixth touchdown before settling down.

In the end, Brito finished 5-of-9 for 15 yards before the injury. West sparked the offense in the second half and led the Minutemen to three garbage time touchdowns, finishing 15-of-21 for 131 yards.

“His production was good coming out of the second half,” running back Bilal Ally said. “I though the first drive didn’t go well, but once we started running plays that we needed, just focusing on the little details of our jobs, we were fine. Staying in there for pass protection, encouraging the offense to protect our quarterback, protect our guy. So we got him the protection he needed for him to make the throws he could make and his reads.”

To make matters worse, star cornerback Isaiah Rodgers went down on a kickoff return and was stretchered off the field. Although he was cleared and released from the hospital before the game ended, the injury brought an end to his career at UMass.

But while the score didn’t give much cause for optimism, UMass came back out after the half and put together two mostly solid quarters. The defense buckled down, allowing under 200 yards and just seven points in the second half. Aside from a 62-yard run by McChesney, the Minutemen made plays to keep BYU’s offense in check.

West, meanwhile, sparked a UMass passing attack that had been absent for several games, and redshirt junior Bilal Ally’s hard running propelled the Minutemen to a functional half on offense.

“[BYU] helped us a little bit, they slowed some things down, put a bunch of our backups in,” Bell said. “But I think for us, it was, why are we really here? And that’s to make sure that the seniors, that we honor them with how we play. This is going to be a game that they remember and that they live with for the rest of their lives, and we’ve got to honor them with how we play. I thought we did a nice job coming back in the second half and playing well.”

The loss epitomized the 2019 season for UMass: the outclassed Minutemen fell way behind due to poor execution, put up a good fight in the second half, but didn’t get to see the results of that effort on the scoreboard.

“I know it didn’t go the way we wanted it to, but I’m proud of the team and proud of the stride that we’ve taken,” Ally said. “I feel like we’ve got a lot more to gain as we keep moving forward.”