The Minutemen play in Hamden on Friday, Amherst on Saturday 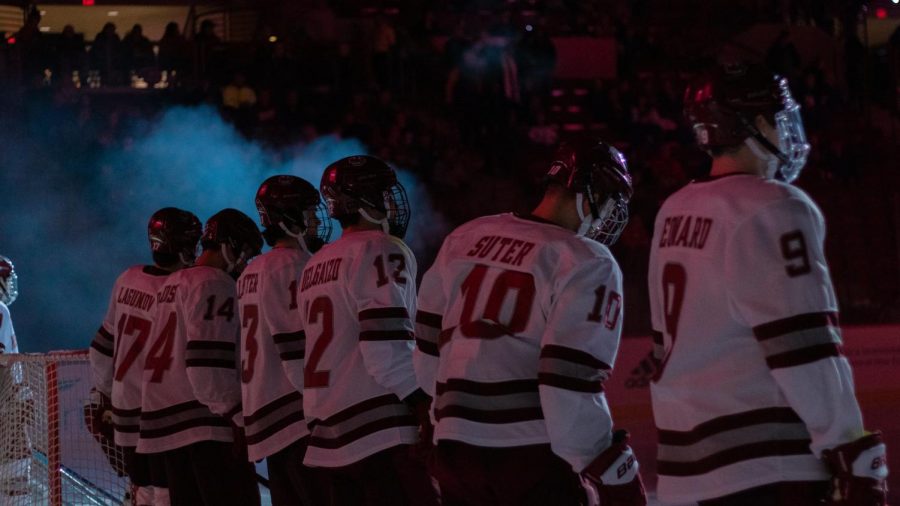 The grind goes on for the Massachusetts hockey team over the break, even on Thanksgiving Day.

While most students will spend this Thursday with their friends and family at dining room tables, the Minutemen will spend it together on a bus bound for Hamden, Connecticut. They’ll enjoy a holiday meal on Wednesday before they hit the road, but once the plates are cleared and the desserts are finished, it’ll be business as usual for No. 10 UMass.

After picking up three points against Merrimack, the Minutemen (8-3-1, 4-3-1, Hockey East) set their sights on a home-and-home with Quinnipiac, which begins on Friday at People’s United Center.

It’s the first meeting between the two teams since last December, when the Bobcats (6-6-1, 2-3-1 Eastern College Athletic Conference) took the first matchup at home before then-top-ranked UMass returned home to the Mullins Center and secured a come-from-behind win in front of a capacity crowd.

“Always a well-coached, hard-playing team that’s very structured, and plays very well in their building,” coach Greg Carvel said over the phone on Tuesday. “So, we’ll have to be at our very best. It’s a chance for us, again, to show some consistency and show our effort level and our process of preparing to play a good team, so it’s another weekend playing another good team.”

In Friday’s 2-2 tie with the Warriors (2-8-2, 1-4-2 HEA), they were anything but consistent, even after a split with Boston University the week before that showed a pair of solid efforts.

UMass responded on Saturday with a character win at Lawler Rink, showing more consistency, but still needed two goals in the final 4:33 to claw out of a two-goal hole and garner two league points.

“I thought the team responded and played a great game – that’s a tough rink to play in,” Carvel said. “You need to be playing well to win, and I thought our guys, even though we were losing late in the game, other than the penalties, 5-on-5 we were playing a great game; great effort and following the game plan, and found a way to win. The team’s done that a number of times this year, finding ways to win in the third, so it was a good response.”

In the 3-2 comeback, Cal Kiefiuk contributed two goals, the second came as the game-winner. He was named Hockey East Rookie of the Week for his efforts and has scored five goals in 12 games.

“He’s played well, he’s played hard, he’s getting rewarded,” Carvel said. “We like to say ‘you get what you deserve,’ and I thought that was the case. He’s been a very consistent player for us as a freshman – he’s good around the net, he’s got a scoring ability, so I’m real happy for him.”

Kiefiuk’s five goals are third-most on the team, behind Mitchell Chaffee’s 10, tied for second in the nation, and John Leonard’s seven. Reed Lebster, Bobby Trivigno and Matt Kessel each have four.

Ahead of Quinnipiac, the Minutemen are working on ‘the usual’ points of emphasis in their own game.

“Just focusing on our compete, on our effort, the power play,” Carvel said. “Special teams is always going to be a factor, so we got to get better there. PK’s been consistent, but the power play is definitely a focus. We’re playing another very good team that plays hard and we got to make sure our battle level is at the right level.”

The Bobcats enter the two-game set coming off of conference losses to No. 2 Cornell and Colgate last weekend. Through 13 games, they’re producing an average of 2.38 goals per game and allowing 2.77.

Odeen Tufto leads the offense with 13 points on 12 assists, while six goals from Wyatt Bongiovanni and five from Nick Jermain add to the scoring.

Keith Petruzzelli holds Quinnipiac down between the pipes. The junior holds a 6-5-1 record in net with one shutout and a save percentage of .904.

Puck drop is set for 7:30 p.m. on Friday in Hamden and 7 p.m. on Saturday night at the Mullins Center.