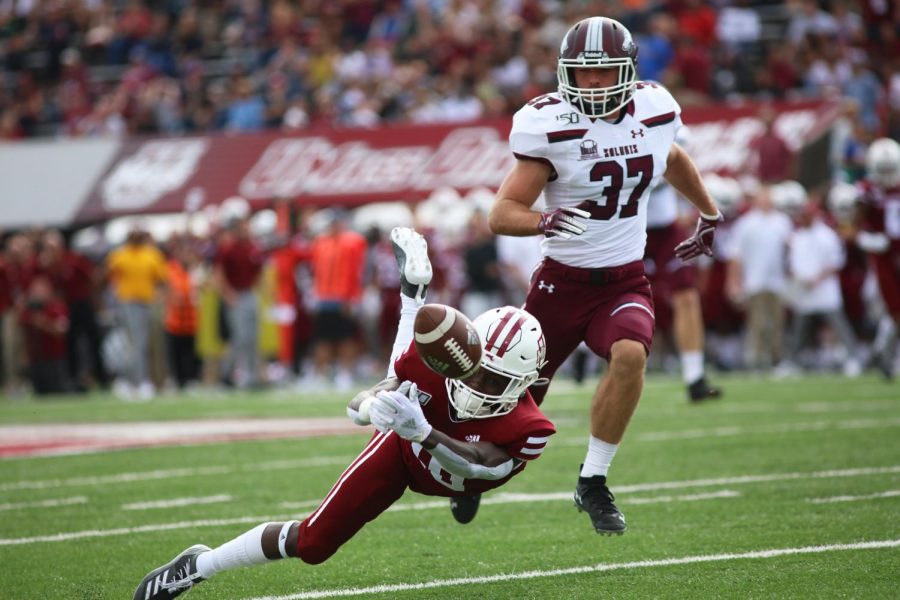 It’d be a major understatement to say the offense for the Massachusetts football team has not been great all year long.

A quarterback carousel, a lack of depth and uninspiring play calling has seen the Minutemen (1-9) average 20.7 points per game, ranking them 113th of 130 Division I schools in the country.

“Execution is key,” coach Walt Bell said of the offense. “That’s practice habits, that’s coaching, that’s our job. To put together a group for three hours on Saturday and do a good job. It’s just about carrying practice into game day. Every opportunity we get, every repetition that we get, especially with a really young group, we are better for it.”

What might help the lousy efforts of the UMass offense on Saturday is the historically poor offense of the Wildcats (1-8), which ranks 129th of 130 teams in the country, scoring only 11.1 points per game. Northwestern was shut out 20-0 against now No. 24 Iowa and could muster only three points in games against now No. 2 Ohio State and Indiana.

While a quick glance at the numbers might lead one to believe that the UMass offense is better than Northwestern’s, reading between the lines shows that it probably isn’t. The Wildcats play in the Big Ten, one of the best conferences in college football, against interconference opponents such as No. 14 Wisconsin, Ohio State and Iowa. The Wildcats have the fourth hardest strength of schedule in the country, while UMass has the third easiest.

“Everyone is going to see [Northwestern’s] record and say they’re not playing great football,” Bell said. “But they’re sound, they’re disciplined. There’s a reason those guys won 10 games just a year ago.”

For the UMass offense, it seemed to be putting things together prior to Sunday’s 63-7 defeat to Army. It totaled a season high 439 yards against UConn, along with two respectable offensive performances against Louisiana Tech and Liberty, where it seemed to pick up steam as the games went along.

“It’s just about execution,” quarterback Andrew Brito said. “Everybody needs to do their part and it starts and finishes with the quarterback. Without good quarterback play you’re not going to be able to move the ball at all. I think it’s really focusing on everybody doing their job.”

Brito, who transferred to UMass from junior college this season, has seen his play fluctuate over the year. He posted a solid 16-for-27, two-touchdown performance against Liberty, yet could only muster 75 yards on 6-for-16 against Army. Of the 75 yards against Army, 56 came on a trick-play touchdown in the first quarter. He was later benched for Randall West in the third.

“Every day at practice, no spots are solidified,” receiver Jermaine “OC” Johnson said about the quarterback carousel. “We’re basically getting reps with mostly all the quarterbacks, the ones, twos and threes. We have a good hold on each quarterback, no telling who the starter will be.”

Though the Northwestern offense and the UMass offense seem to be fairly similar, the Wildcats still open the game as 39-point favorites against the Minutemen.

“What I’ve been told [is that] their offense is down right now,” Johnson said. “But their defense is told to play physical basically. I know they’re going to bring a challenge and it’s just up to us to accept that challenge and just play physical also.”

Two pretty bad offenses. One game. Kickoff is set for noon on Saturday from Evanston, Illinois.

Dan McGee can be reached at [email protected] or on Twitter @DMcGeeUMass.