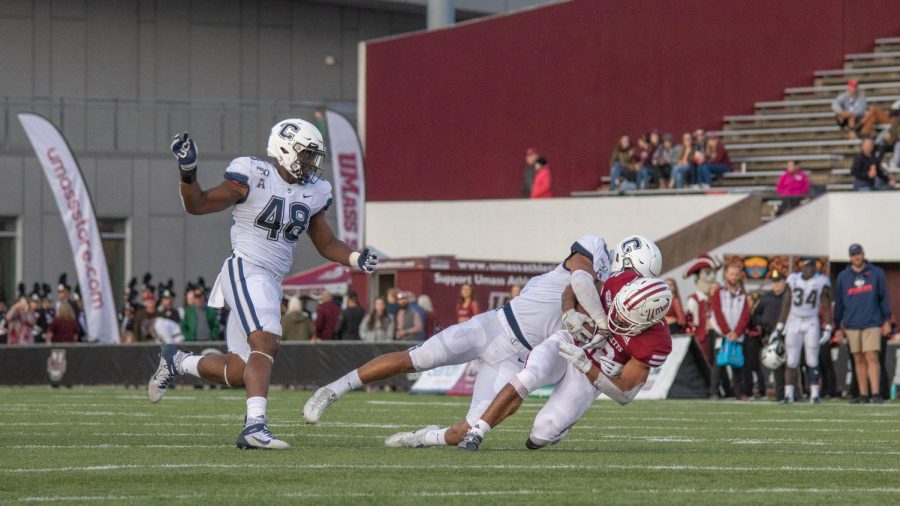 WEST POINT, NY — It was expected that the Massachusetts football team, with a badly struggling run defense, would be gashed on the ground by Army, which relies heavily on the run. But the Minutemen allowed 498 rushing yards and the Black Knights calmly marched up and down the field for a 63-7 win that was never in doubt.

The irony was that UMass (1-9) had its moments defensively, moments that have been lacking for much of the season. Instead of giving up 40-yard runs down the middle with multiple broken tackles, the Minutemen made clean tackles, controlled the interior of the line, and nonetheless succumbed as an Army team only averaging 10 passes a game wore them down.

“Any time you give up 400 some-odd yards rushing and 63 points, obviously you’re not going to be really excited,” coach Walt Bell said. “But early in the football game, in the first half and into the third quarter, I thought that we did a nice job stopping the dive. I thought as the game wore on, just with where we are from a depth standpoint – we only had three healthy safeties today, only three healthy corners – I thought we wore down a bit on the perimeter of the defense. You started seeing the lead-option hit.”

As Army brought out the renowned triple-option offense, UMass managed to handle two of the options for most of the game. It was on the perimeter, the weakest part of the attack this season, that the Black Knights found room to run.

“Just watching film, they mainly focus on the dive,” cornerback Isaiah Rodgers said. “So our main goal throughout the week was make sure we stop the dive, and I feel we did that. Some people just were too focused on the dive, and we let the ball get outside of us.”

From the very first drive, the Black Knights were finding success outside, driving 52 yards in five plays for their first score. Running back Sandon McCoy earned Army’s first three touchdowns, all from short distance.

While the UMass defense showed promise for the first time in defending those inside runs, it couldn’t get off the field, which proved costly. Army’s first four drives ended in touchdowns before it finally punted for the first time late in the second quarter. By that time the Black Knights already had a 10-minute edge in time of possession; by game’s end Army had held the ball for 41:13, while the Minutemen mustered just 18:47 of possession.

“We went in knowing that they like to hold the ball pretty much over 30 minutes most of the games they’ve played in,” Rodgers said. “We went in with that mentality knowing that we were going to be on the field for a while, so didn’t really bother us.”

While the defense couldn’t get off the field, the offense couldn’t stay on. Outside of a 56-yard touchdown from quarterback Andrew Brito to tight end Kyle Horn on a trick play, the UMass offense managed just 50 yards of offense in the first half, for a grand total of four first downs.

By the end of the game, UMass had totaled just 125 yards of offense. Running backs Bilal Ally and Cam Roberson were ineffective and the passing game never got going. As Army racked up points, UMass was racking up three-and-outs.

“Offensively this was probably about as bad as Florida International,” Bell said. “We have a lot of work to do offensively, ability to convert on third downs, ability to run the ball when called upon, and I thought more than anything else that kept our defense out on the field. Knowing that we were trying to control the pace, keep our defense off the field as much as humanly possible, and we didn’t get it done.”

Brito was unable to get the offense moving at any point, and his worst moments were ugly. Down 21-7 in the second quarter and deep in UMass territory, Brito flung a wild pass into the heart of the defense and was intercepted by senior Ryan Velez, setting Army up in the red zone. The ensuing touchdown left UMass down three scores and more or less knocked the Minutemen out of the game.

The offensive play-calling opened up in the third quarter down 28, but Brito couldn’t take advantage. Sadiq Palmer and O.C. Johnson dropped consecutive open passes on Brito’s final drive before Randall West took over at QB.

Brito finished 6-for-16 with 75 yards, a touchdown and an interception.

The last gasp for the Minutemen came with just over two minutes left in the first half, when UMass faced fourth-and-14 from its own 9. Bell called for a fake punt, but linebacker Chinedu Ogbonna’s pass was just too long for the open Daryan Wiley.

Army took over and punched the ball in for a 35-7 lead and the final nail in UMass’ coffin.

“We kind of knew when they were going to bring a block,” Bell said. “We prepared all week along, even if it was on our own minus-one, minus-two yard line, we had the play. They took a timeout and I guessed that it would be block – that’s why they took timeout, to see if we were going to go spread punt or not, we were in spread punt. They brought the block, we had it wide open, just didn’t connect.”

The Minutemen have now lost five straight, the last two by a combined 98 points, as they head into the final two weeks of the year.

“Just finish strong, finish hard,” Rodgers said. “Get ready to like change the culture, pass it on to the younger guys, freshmen, sophomores, juniors, for years to come.”