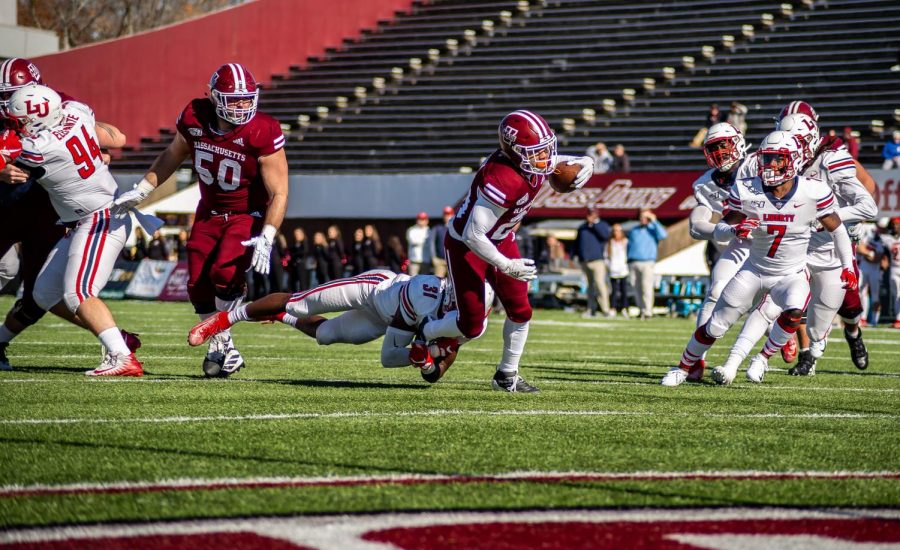 Well, that was ugly.

“I don’t think there’s a metric within the game of football where we had very much success today,” coach Walt Bell said. “That was as thorough a victory probably as you’ll see in college football. The most important thing is tomorrow, we’re going to come back to work. Excited to come work tomorrow.”

Liberty set the tone on its opening drive, moving the ball 65 yards in 1:38, capped off by a seven-yard Frankie Hickson touchdown run. Hickson would run for 99 yards and three touchdowns in the contest.

With their opening drive stalling, the Minutemen benefitted from a Flames muffed punt, putting Cam Roberson in position to run 16 yards for the score and tie the game at seven. Roberson was one of few bright spots for the Minutemen in the loss, finishing with 73 yards and averaging 4.9 yards per carry.

“I felt pretty good,” Roberson said. “We knew 26 and 27 were going to be key runs for us, we’ve been practicing just trying to reach and see what lanes are going to open up for us. We broke off a couple big runs running 26 and 27. They adjusted well, that left 22 and 23, our vertical runs, to start opening up a little bit. I thought overall, we accomplished what we wanted to do running the ball.”

The 7-7 tie wouldn’t last long, however. Liberty made the most of blown coverages and missed tackles in the UMass secondary, putting together big play after big play. The Flames’ next drive lasted only three plays, highlighted by a 62-yard pass to running back Joshua Mack to set up a five-yard touchdown pass.

“[Blown coverages] were exactly what they were,” Bell said. “That’s when you know you have a few problems there, when it’s that easy to see. It’s just the same thing, ready to go back to work, excited to go back to work.”

George Georgopoulos pinned Liberty on its own 10-yard line on a punt with 2:54 remaining in the first, but Liberty made quick work, driving 90 yards in 1:18 as Calvert connected on a 31-yard touchdown pass to Demario Douglas. The Flames pulled off this quick scoring drive again, completing a 60-yard touchdown to star wideout Antonio Gandy-Golden and extending their lead to 28-7 at the end of the first quarter.

UMass had a rough week of practice, with Wednesday’s practice cut short by Bell for perceived lack of effort and discipline, and senior Isaiah Rodgers attributed many of the blown coverages to that rough week.

“Just the week of preparation, we had a negative week so we’re just trying to bounce back,” Rodgers said. “There’s a lot of young guys out there, but we’re going to get adjusted and get ready for Army.”

Flames quarterback Stephen Calvert continually found wide-open receivers in the secondary, amassing 441 yards and four touchdowns in the first half alone. Calvert broke his own Liberty record for passing yards in a game, throwing for 474 yards before being relieved early in the third quarter.

Moving the ball well to start the second quarter, the Minutemen drove into scoring position to set up Josiah Johnson’s first career touchdown reception on a three-yard pass from Andrew Brito, trimming the lead to 28-14. However, the Flames bounced back, tallying three more touchdowns to extend their halftime lead to 49-14. Liberty extended the lead again on Hickson’s second and third touchdown runs of the game during the third quarter.

Despite not allowing any sacks through the first two quarters, the UMass offensive line crumbled in the second half, allowing Brito to be sacked five times amidst constant pressure from Liberty.

Brito connected on his second touchdown pass of the day to Sadiq Palmer for a 45-yard score halfway through the third quarter, but it was too little too late. A 42-point deficit proved too much to overcome for the Minutemen, who fell 63-21.

When it was all said and done, the Minutemen had allowed 730 total offensive yards, by far the most they’ve allowed all season.

“I think any time, in a results based business, that you don’t get the results you want it, yeah it hurts,” Bell said of the team morale after UMass’ eighth loss. “It’s brutal. But I think the great thing about this game and about this football team is majority of the time this is a pretty resilient group. If you look at any of the great turnarounds in the history of college football…it’s always really, really dark before there’s some light. So we’ve got to recruit, we’ve got to develop and we’ve got to coach every day like our lives depend on it, often because they do.”

UMass will look to rebound next Saturday as it takes on Army. Kickoff is set for noon.