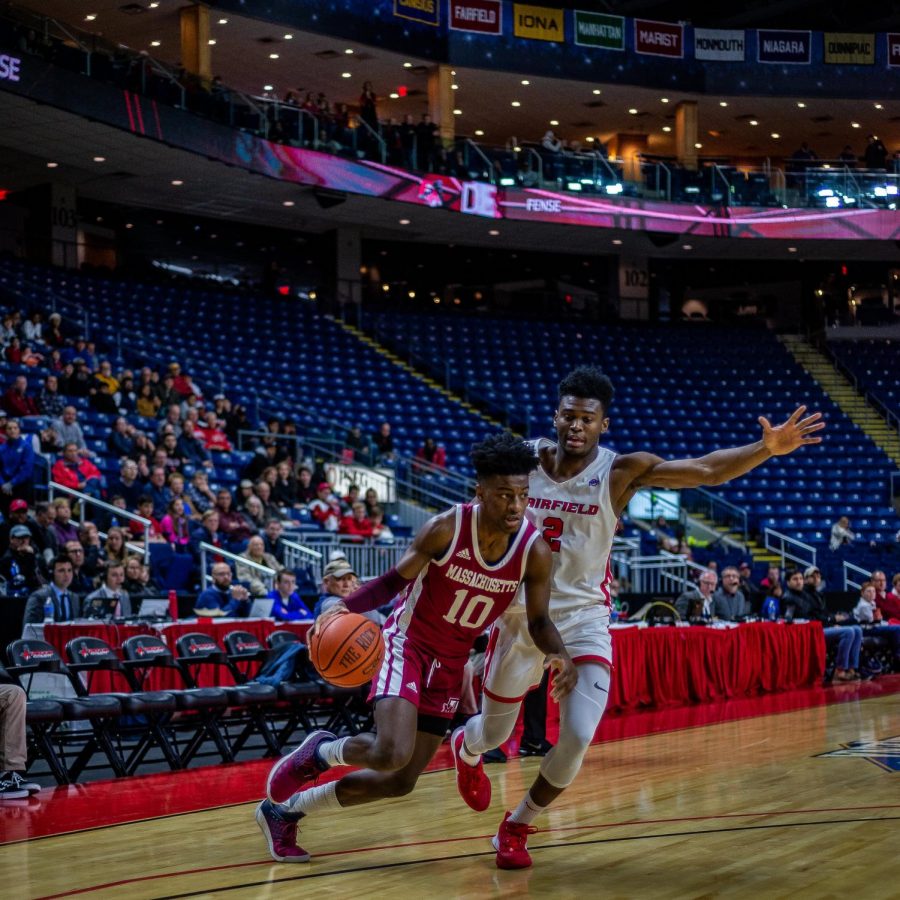 In its young season the Massachusetts men’s basketball has been successful so far. They’ve had a dominant win over an in-state rival in UMass Lowell and had their resiliency tested, managing to come back in a tough away game to beat Fairfield. Come time for Tuesday night, UMass (2-0) will face its toughest test yet this season when Northeastern comes into town.

The Huskies (2-0) are riding the dominant play of guard Jordan Roland to start the year. The red-shirt senior has already managed to drop a combined 81 points so far in his first two games of the season. Coach Matt McCall knows the test ahead and understands the importance of limiting the scoring of the red-shirt senior when on the court.

“You got an in-state program coming to your gym tomorrow, hopefully we get a great crowd here,” McCall said. “Obviously Northeastern and what they’ve done [with] NCAA tournaments, you’ve got a guy averaging [40.5] points a game, they’ve got a great team and they’re picked again to finish at the top of the CAA again. This is awesome.”

If UMass wants to start the season 3-0 for the first time since the 2015-2016 season, then they have to play strong basketball in the first and second half. It was a tale of two halves on Saturday when the Minutemen narrowly hung onto a two-point win over Fairfield. The Minutemen shot just 36 percent from the field in the first half and struggled to get into any rhythm offensively. Key three-point shooting from players like TJ Weeks and Carl Pierre will be a factor in how UMass plays against Northeastern. Pierre finished with only three points in the Fairfield game, but his lone three-pointer was a turning point in the game for the Minutemen. His sharp shooting and ability to get hot from three will be a boost for UMass in the game versus Northeastern.

On the other hand, Weeks must continue his strong play to start the season. The freshman is averaging 16 points per game so far through his rookie campaign and is shooting 70 percent from beyond the arc. The freshman put up 23 points in his debut for the Minutemen versus UMass Lowell and will need another strong performance Tuesday night to help the Minutemen.

Another freshman that needs a strong performance is freshman center Tre Mitchell. The center has lived up to the hype through his first two games of the season and has averaged eight rebounds a game along with 14 points.

“I’m expecting a good game from what I’m hearing,” Mitchell said. “We have to make adjustments, do what we have to do, and hopefully get them on the road with an ‘L’ and sad on the bus.”

After starting the season 2-0, UMass certainly will have their skills tested on Tuesday night in an experienced Northeastern team that made the tourney last year and is favorited to make it again. McCall has been adamant with his players to stay poised and to enjoy the moment that they will get Tuesday night to face a good program like Northeastern.

“I’ve told our guys: you guys got a chance right now to change the perception of UMass basketball that has been in the last 20 years or so by competing and winning games like this,” said McCall. “It’s not going to be easy, you got to go out here and play the game inspired and play really, really hard. This is awesome to play this early in the season, and hopefully this place will be loud and give us an advantage there and get this place back to where everybody wants it.”

UMass versus Northeastern will tipoff at 7 p.m. in the Mullins Center.