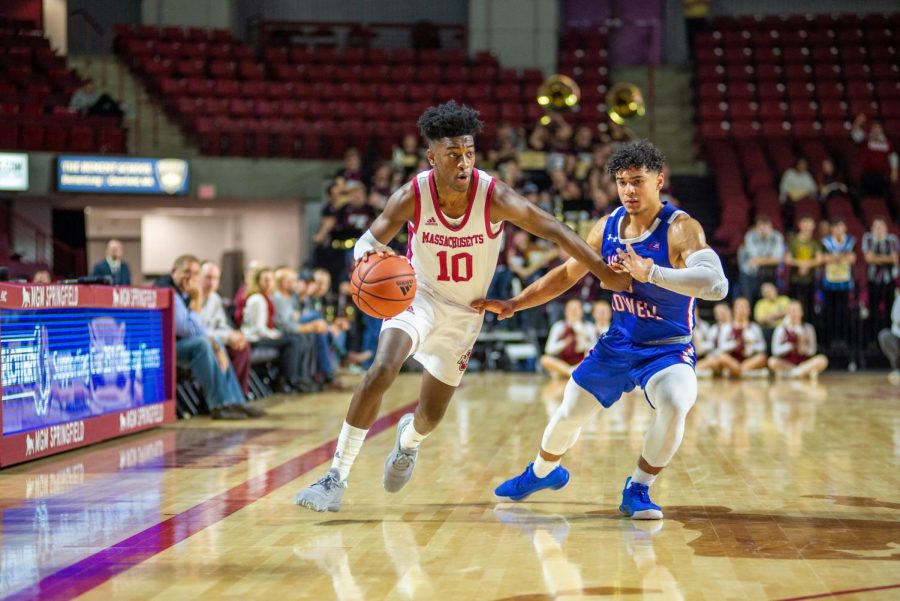 The Massachusetts men’s basketball team started their season off with a dominant 15-point win over UMass Lowell to start of their campaign for the 2019-20 season on Tuesday, as the Minutemen showed some weaknesses early but pulled away in the second half in an exciting 79-64 win at home.

UMass coach Matt McCall was thoroughly impressed with his young group of players, who went up against a heavily veteran led team in UML.

“You got older guys, and veteran guys that when they get into their league that’s going to be a tough game for their opponents,” said McCall. “[It] was a total team effort…a complete team win and very proud of our team.”

The Minutemen started the game off slow, only shooting 38.7 percent from the field in the first half, which saw them leading by three points at halftime. Highly-touted freshman Tre Mitchell struggled to produce down in the paint in the first half, but still managed to get to the line and make some baskets. The center finished with 10 points and nearly notched a double-double with nine rebounds.

The main bright spot for UMass (1-0) was freshman guard TJ Weeks. The Woodstock grad was firing on all cylinders from three and finished going 4-of-6 from deep.

“I had the jitters coming in, [I] was a little nervous with the first game that actually counted,” said Weeks. “Once we went back and forth I started feeling good.”

Weeks had the attention of the UMass fans after knocking down back-to-back threes in the second half, and at one point it felt like the place would’ve erupted had he knocked down his third straight on the following possession.

Running the offense for most of the night was freshman guard Sean East II. He finished with 11 points and six assists with no turnovers on the ball. McCall had high praise for the freshman getting his first nod on opening night.

“He’s steady, you feel comfortable with him having the ball in his hands. Coach Bergeron played against him last year, and when coach got the job here last year [East] was of the first names he brought up,” said McCall. “He’s got great vision. My biggest message to him has been to be fun to play with, be the point guard your teammates want to play with.”

The Minutemen pulled away in the second half in part due to the sharpshooting of Weeks, and junior Carl Pierre. The junior guard finished with 13 points, after only putting up three points in the first half. Pierre finished the game going 5-of-12 from the field and 3-of-8 from behind the arc.

On the other side, UML managed to stay within reach throughout most of the game, cutting the lead to six multiple times throughout the second half. Leading the way for the River Hawks was guard Obadiah Noel, who ended the game with 18 points and going 3-of-6 from three. UML couldn’t keep up with the Minutemen in the final three minutes, as back-to-back threes from Weeks pulled the Minutemen away.

UMass defensively notched 11 steals and seven blocks. The press defense worked effectively at times but showed weaknesses at times throughout the game. Djery Baptiste was a force to be reckoned with inside, finishing with four blocks playing 16 minutes.

UMass heads to Fairfield on Saturday to take on the Stags. The game tips off at 1 p.m. at George Bisacca Court.

Frederick Hanna III can be reached at [email protected], and followed on Twitter @FrederickIII.