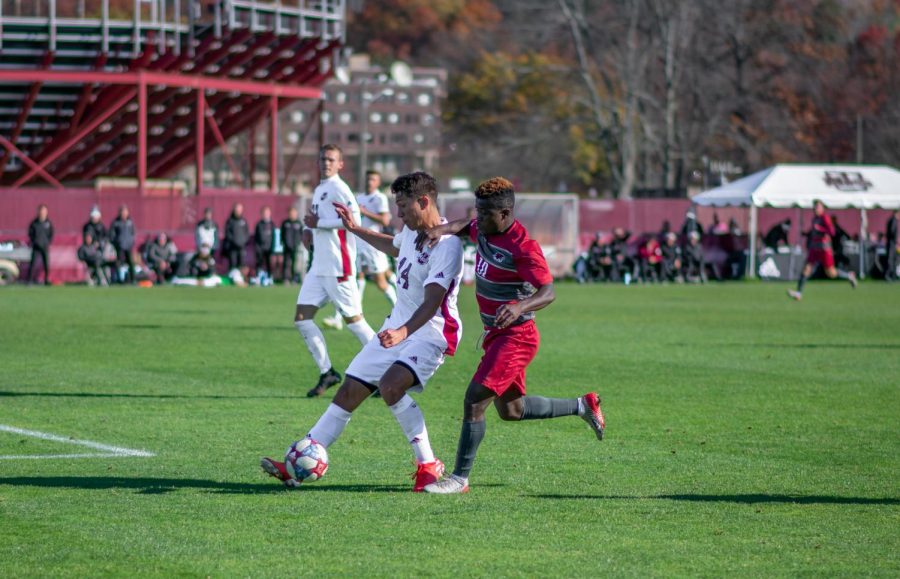 With no more games left to play in the regular season and the fate of their season now out of their hands, all that is left for the Massachusetts men’s soccer team to do is wait and see if they qualify for the Atlantic 10 tournament.

Although UMass’ victory over Saint Joseph’s on Saturday afternoon is not alone sufficient enough to boost UMass (7-10-0, 3-5-0 A-10) into the tournament, there are a number of scenarios that could potentially extend the Minutemen’s season. The simplest way this could happen is by way of losses from Davidson and La Salle and at least a point gained by either George Washington or George Mason – which would place the Minutemen as the eighth seed in the tournament – but there are a number of similar scenarios that could boost the Minutemen as high as the sixth seed.

“I’m really, really proud of this group,” UMass head coach Fran O’Leary said. “It’s senior day today and 50 percent of our seniors are in street clothes and haven’t kicked the ball this season, guys we thought would have a major contribution. With seven guys out today – all that would have figured in the starting lineup – to finish the season winning three of our last four with several key players out is a testament to all of the guys, to the leadership of the seniors, and to the enthusiasm all the way down to the freshmen.”

Despite a strong 3-0 start to the season during which they allowed no goals, UMass struggled through injuries to key players such as Yosuke Hanya and Eli Cronin and was forced to play a younger, less experienced rotation that included several freshmen. Following the injury to Cronin, the Minutemen hit their low point during an eight-game skid that lasted over a month. Once UMass finally beat Duquesne on October 19th, the Minutemen capitalized to close their season with three wins in their final four games.

“We’d love to keep the season alive,” O’Leary said, “We just want to go and give a competitive performance and obviously win games. We’re getting into a nice little winning habit over these last few games. These conference games are tight – playoff games are usually decided by one goal – so we’ll look to be the team to score the goal.”

Whether they qualify for the A-10 tournament or not, the Minutemen have built plenty of momentum over the past four games that will either carry over into next season or the tournament. Among the hardest workers down the stretch have been the intimidating defenseman Ryan Saul and the hardworking freshman Ryan Levay, who scored the only goal in the Minutemen’s final victory. Both Saul and Levay hope UMass qualifies, but were pleased with the way the season ended regardless.

“I wish we weren’t in the position we were in,” Saul said, “but today we knew we needed to take care of our end of business and then the rest is out of our control right now so it feels good to end with a win and now we wait and see what happens.”

Levay feels proud of the way the Minutemen fought through adversity.

“Obviously we want to make it to the A-10’s,” Levay said, “but we’ve won three out of the last four of our games, we have a ton of guys out, so we’re just keeping our spirits high and I’m really proud of all of the boys and everything that we’ve done, so just hoping for the best at this point.”

The games that could possibly qualify or disqualify the Minutemen from the tournament will all occur Saturday night. With no more work to do on the field, the Minutemen will simply have to wait and see what their fate will be.