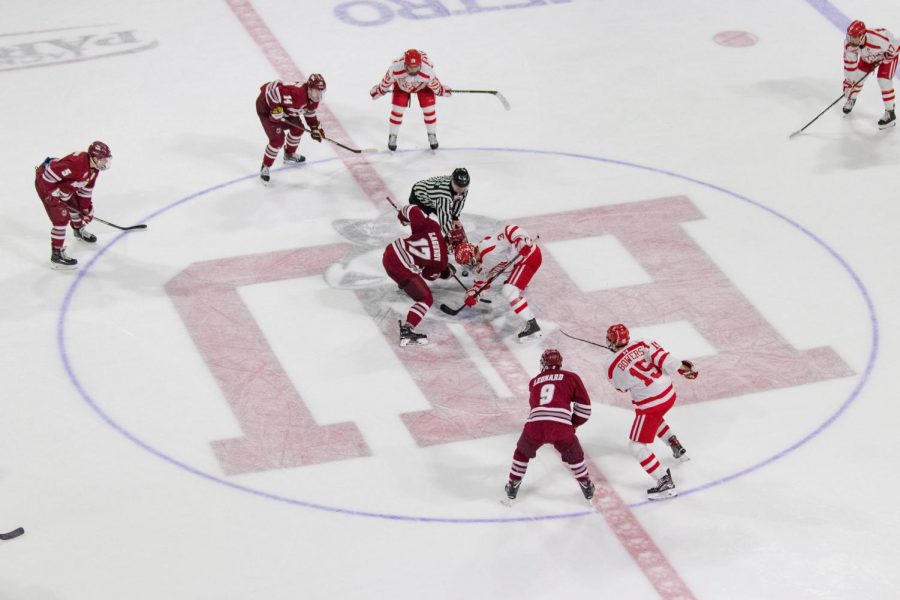 BOSTON – The Massachusetts hockey team put everything it had on the table in the third period on Friday night at Agganis Arena, but it wasn’t enough as it was dealt a 4-3 loss by Boston University.

After entering the final period trailing 4-0, the Minutemen (6-3, 2-3 Hockey East) came storming back with three goals in the first ten minutes of the third to pull within one, but their efforts came up short in the end, as the Terriers (3-3-4, 2-2-3 HEA) handed UMass its third loss of the season.

Sam Tucker was phenomenal for BU in net, stopping 49 of the 52 shots that were sent his way. With the defeat, the Minutemen drop back-to-back games for the first time since March 2018.

“I thought we played extremely well tonight, we got beat by the BU goaltender,” coach Greg Carvel said. “The kid made a lot of big saves. We can be better around the net, but we sure did a hell of a lot to score goals and their goaltender was playing extremely well.”

The Terriers ousted a strong, physical start by UMass just seven minutes into the game.

Following a handful of chances in the opening minutes, BU took an early lead when Matthew Quercia jammed home a backhand past Matt Murray on a rebound from Patrick Curry’s shot.

After one, the Minutemen led 18-7 in shots but trailed 1-0. The Terriers added onto their lead three minutes into the second when Curry pounced on a loose puck to double the advantage.

Two minutes later, Gabriel Chabot extended the lead to three after walking into the UMass zone untouched, shelfing a shot over Murray’s lunging glove. After allowing the third goal, Murray was pulled in favor of Filip Lindberg who took over in net and made 11 saves during the action.

“It’s not necessarily that Matt was playing terrible,” Carvel said, “but it’s three goals on 10 shots, we’re playing well and you do that as a coach to give the guys some hope, keep them playing, whatever. It’s a coach’s trick. Not saying that Matt played so poorly that he deserved to come out but it’s 3-0. I don’t know. Thought it was the right thing to do.”

With five seconds left in the second on a Terrier power play that resulted from a Zac Jones slashing call, David Farrance waited out Lindberg in front of the crease and roofed a shot to make it 4-0 BU.

Facing their largest deficit of the season, the Minutemen turned it up a notch in the third.

Gianfranco Cassaro got the comeback started 48 seconds into the final frame, burying a rebound that came off a John Leonard shot to pot his first collegiate goal and make it 4-1. Oliver Chau followed it up with his first goal of the season off a feed from Mitchell Chaffee, who elected to pass to his line mate instead of testing the red-hot Tucker.

Nearly five minutes after Chau cut the deficit to two, Jones scored his third goal of the season on a snipe of a wrist shot that he sent from the left dot and scorched its way past Tucker with 11:09 left.

Lindberg made several big-time saves in the last 10 minutes, and UMass nearly tied it on another Jones shot that was tipped just wide by Anthony Del Gaizo with less than 30 seconds to go, but the Minutemen couldn’t find the equalizer and came up just short of completing the four-goal comeback.

“I went into the third period believing that we could, the way we were playing I thought that was as dominating as we’ve been since I’ve been at UMass,” Carvel said. Throughout the whole game, every chance BU got, they made the most of it. It just felt like if we got one a couple more would come and then we had three before the ten-minute mark, and the bench believed it and I think we had a few more chances but couldn’t find a way.”

The Minutemen return to the Mullins Center on Saturday for a rematch against the Terriers.

“I hope we play as well as we did tonight with a little more presence at the net,” Carvel said. “Stay out of the penalty box more. What’d we take? Two penalties, three penalties. That’s too much.”