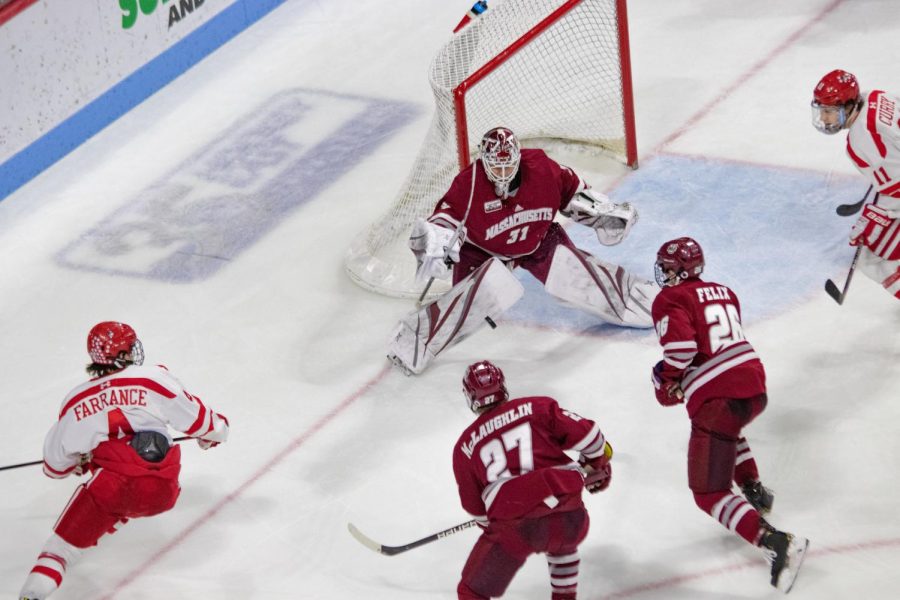 BOSTON – The comeback was within a finger’s grasp. Zac Jones skated across the opposing offensive zone, turned and fired one on the Boston University net.

With two minutes remaining in the third period, time seemed to freeze as the puck nicked Anthony Del Gaizo’s stick and trickled inches away from the open net next to BU goalie Sam Tucker. Every single fan in attendance at Agganis Arena on Friday night thought the puck went in – even the red light went on.

But the puck missed the net by a hair and so too did the Massachusetts hockey team’s chances of completing a comeback, as they lost 4-3 on Friday night.

“I went into the third period believing that we could,” head coach Greg Carvel said. “The way we were playing I thought that was as dominating as we’ve been since I’ve been at UMass.”

Things weren’t going according to plan. The one glimmer of hope for the Minutemen was that they led 38-14 in shots at the conclusion of the second period.

Puck-luck started to turn in favor of UMass just 48 seconds into the third period when John Leonard turned and threw one on net from the blue line. The puck bounced to Gianfranco Cassaro who potted his first collegiate goal to cut the lead to 4-1.

Four minutes later, Mitchell Chaffee slid one across to Oliver Chau on a 2-on-1, leading to No. 20 poking it through Tucker’s legs to make it 4-2. The medium-sized UMass fan section at Agganis Arena burst with a jolt of energy. The Terriers called a timeout to try and stop the momentum from shifting so favorably to the UMass bench.

If the timeout had any impact, it was extremely short-lived. Roughly four minutes after the timeout, Zac Jones roofed one over Tucker’s shoulder and the comeback seemed inevitable. 4-3 UMass.

It had to happen, right?

On Tuesday night, the Boston Bruins coughed up a four-goal lead in the third period to the Florida Panthers just a few miles away. The Terriers weren’t going to fall victim as the second team in Boston to blow that kind of lead this week, as they returned to form in the second half of the final frame to close out the win.

“That’s what the third period was – it was a good test of what we’re made of,” Carvel said of the comeback. “I told them ‘just keep doing what you’re doing, just try to do it a little harder, a little faster, it’s that close.’ You guys saw the game, we were playing well, it’s not like – we were going to have to score eventually. We had 60 shots on net – got to score eventually.”

Tucker was so hot in the first 40 minutes of the game that UMass could’ve had 100 shots and they still weren’t scoring any goals. John Leonard was stoned countless times in the first two periods. One came on a breakaway that Tucker denied.

Leonard ended the night with a team-high 10 shots on goal from 16 shot attempts. Quite the night in the offensive zone for No. 9.

The BU goalkeeper snagged two of Chaffee’s shots with his glove in the second period. One even came on a Minutemen 2-on-0. In total, UMass finished the night with 52 shots on net.

“Kid made a lot of big saves,” Carvel said referring to Tucker. “We can be better around the net, but we sure did a hell of a lot to score goals and their goaltender was playing extremely well.”