Minutemen 0-2 on the weekend 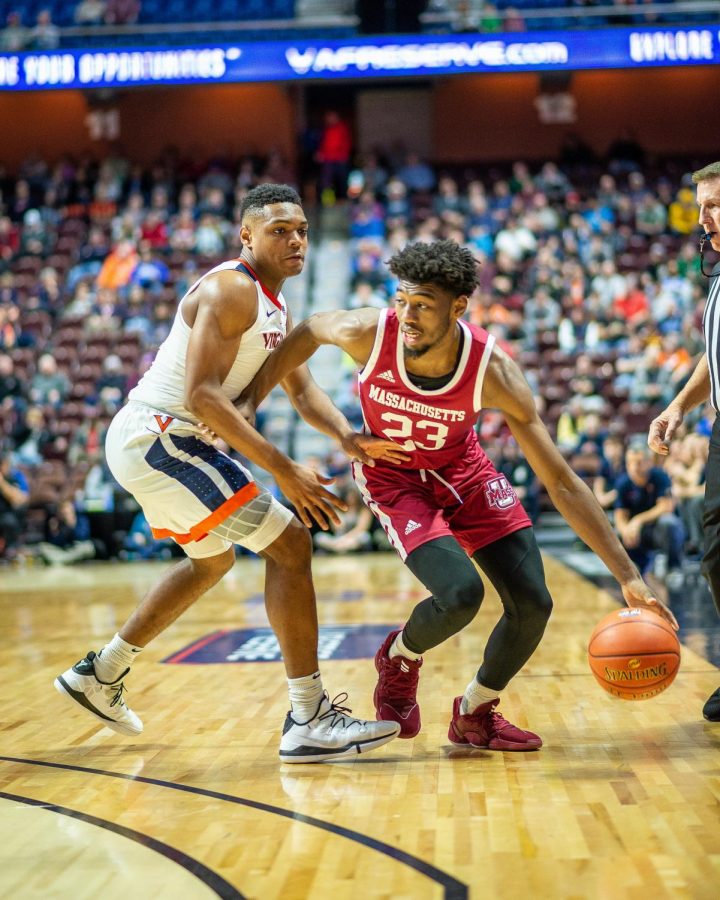 UNCASVILLE, CT. – A potentially positive weekend went south in a hurry for the Massachusetts men’s basketball team on Sunday, as the Minutemen led by five with just under 11 minutes to go against St. John’s but derailed down the stretch en route to a 78-63 loss at Mohegan Sun Arena.

UMass (5-2), coming off a Saturday loss to No. 7 Virginia that had some encouraging signs, saw it all go wrong in the final 10 minutes, a long stretch of turnovers, missed rebounds, unforced errors and shooting struggles that sunk the Minutemen against the Red Storm.

“I think first and foremost, you’ve got to give St. John’s an enormous amount of credit,” UMass coach Matt McCall said. “Made an adjustment, I thought we were in a rhythm there offensively especially in the second half, and they made an adjustment and went zone and we didn’t respond the right way. Our lack of offense completely bled into what we were doing on the defensive end of the floor, and it allowed them to get out in transition and get some easy, easy baskets.”

TJ Weeks led UMass with 19 points — albeit on a less-than-efficient 5-of-15 shooting — and Tre Mitchell chipped in with 14 points and 12 rebounds, though eight turnovers dampened the freshman big man’s afternoon as St. John’s threw double team after double team his way.

On the strength of a few big-boy moves from Mitchell, who blew past a man for a dunk in the lane and then smoked a double team for a layup plus the foul, UMass led by five midway through the second half. From there, a 13-0 run from St. John’s flipped the game on its head and put the Red Storm up by eight, and the Minutemen never recovered. St. John’s went to a matchup zone, and UMass had no answer.

“We had a couple things that we can run against [the zone], had a little bit of success and got some open looks that just didn’t go down,” McCall said. “It took us out of rhythm offensively, and we didn’t respond the right way.”

Pierre hit a three to stop the bleeding, and two Weeks free throws brought UMass within three, but St. John’s started to pull away again. Josh Roberts got inside to put the Red Storm up by five, a bad turnover gave LJ Figueroa an easy layup on the break to push the lead to seven and Roberts flew in for a putback dunk to make it nine.

“Towards the end [of the first half], we finally started to play hard, and I think that’s why we were able to get a lead there and extend the lead,” McCall said. “And then in the second half, we’re up five, and we missed some bunnies inside, missed a big layup there, then a couple more that would stop the bleeding a little bit. They just went on a run, and we didn’t respond the right way.”

Sy Chatman hit a free throw to cut the deficit to eight with 1:45 to go, but UMass never got any closer. The Minutemen finished 1-of-12 to close the game, shooting a paltry 21 percent from the field and 16 percent from three in a second half to forget.

“I thought our youth showed at times today, in the sense of just not responding the right way,” McCall said. “In certain situations you’d like to have a timeout, and we didn’t have any — to stop the run, stop the bleeding a little bit — because we burned too many in the first half.

A 42-14 deficit in the paint, 17 turnovers, a seven-rebound disadvantage in the second half alone — the numbers were not kind to UMass, especially late. Over the final 10 minutes, the Minutemen were outscored 30-10, the first truly difficult stretch this season.

“I think that we were completely consumed with on offensive end of the floor and gave up offensive rebounds, especially late, that they got some tip dunks, they got some highlight reel plays and we just didn’t block out.

“I thought the matchup zone — I told the team after the game, that’s on me. I’ve got to do a better job preparing them for that,” said McCall.

UMass will have a few days off before a Friday trip to Rutgers.