UMass shot 33 percent from the field 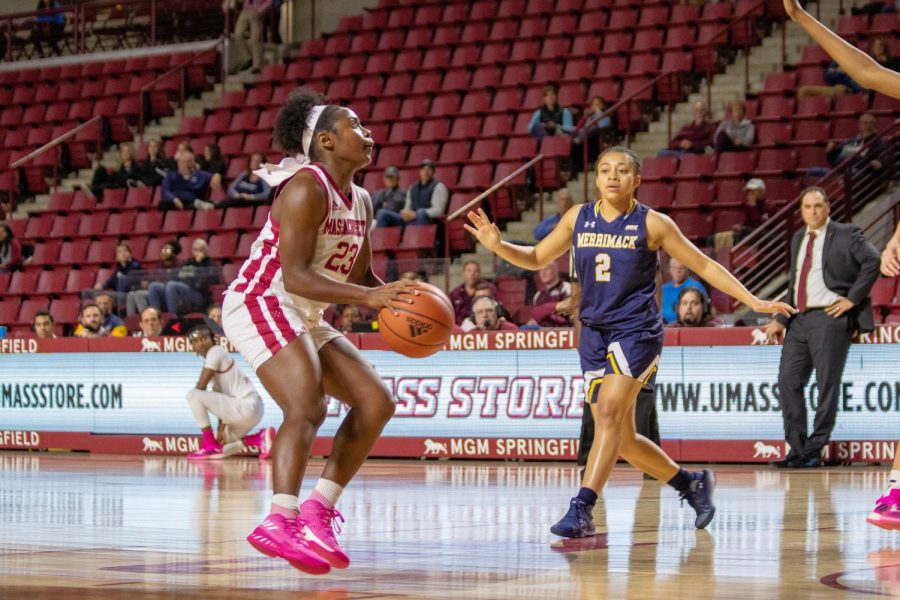 The Massachusetts women’s basketball team fell 79-64 to the Merrimack Warriors in their opening game of the 2019-20 season.

The Minutewomen had no answer for the Warriors’ three ball the entire night and failed to defend Deni Davis-Stewart who recorded a triple double on the strength of 31 points, 13 rebounds and 12 blocks.

Merrimack raced out to a 22-16 lead after the first quarter taking a seven-point lead into the halftime locker room. They were the hungrier team after halftime too dropping 24 points on the Minutewomen defense.

“I got to give Merrimack credit,” coach Tony Verdi said. “They had more energy from the get-go. I thought they played a great game.”

The Warriors particularly owned the Minutewomen from beyond the arc. Merrimack shot better than 50 percent from distance over the entire contest while UMass was a pedestrian 4-17. In the first half, the Warriors’ Kate Mager dropped 15 points, all from distance while Destiny Philoxy was the only UM player to hit one.

The second half was more of the same as the Warriors nailed 6 for 11 three-point attempts and the Minutewomen were 3 for 11.

Verdi says his team knew about the Warriors shooting touch and prepared for it, they just did a poor job of defending it.

“We know that they could shoot the three and we did not execute our game plan whatsoever,” he said. “We didn’t stop the ball in transition, we didn’t defend the three-point line. We did a really bad job communicating defensively and matching up and for whatever reason we allowed them to catch the passes and see the rim and give them open shots.”

Offensively, the Minutewomen were unable to play their style of game. They want to be able to drive and either take the ball to the rim or kick it out to a wide open three-point shooter. But with Davis-Stewart down low for MC, the lanes seemed more clogged forcing UMass to become a jump shooting team or put up contested layups. At the start of the game, the Minutewomen were choosing the contested layups, but Davis-Stewart was having none of it. Nine of her 12 blocks came in the first half.

“We did not do a very good job of attacking the interior. The fact that Davis blocked several of our shots early on, I think our players started to hesitate,” the fourth-year coach said. “Then we just became one dimensional. We shot the ball, we missed and we became very passive against their zone.”

The three-point shooting woes were a combination of poor shot selection and just not getting the rolls. Of course, Davis-Stewarts’ inside presence made the offense more predictable and therefore easier to defend.

“I think we forced a lot of shots,” junior guard Paige McCormick said. “Early in the offense we did not move it as well as we usually do. Just poor shot selection and choice there. Obviously, we need to knock more down regardless of shot selection.”

The Minutewomen did have some success offensively with pull up jumpers from just outside the free throw line. McCormick was strong in that area, leading the Minutewomen in points at 17 with many of her baskets coming from plays like that.

But overall, the field goal percentage of 33 percent coupled with 57 percent from the free-throw line was enough to doom UMass. In turn, the Warriors were 7-7 from the charity stripe and shot a smidge under 50 percent for the game.

The loss comes as a wake-up call for the Minutewomen, something that Verdi does not think is such a bad thing.

“I’m glad that this happened to us and I say that because we’re going to learn from this. Two weeks ago, I wrote a word on the board during film session and that word was ‘toughness’,” Verdi said. “My question to my team is ‘who are we?’ Are we going to be resilient? Do they have enough character to respond? We are facing adversity right now and I want to see who they are.”

Verdi and the Minutewomen faithful will get that opportunity this Saturday when UMass plays host to Providence at 2 p.m.