UMass women’s basketball ready to take the next step

UMass reached .500 for the first time under Verdi last year 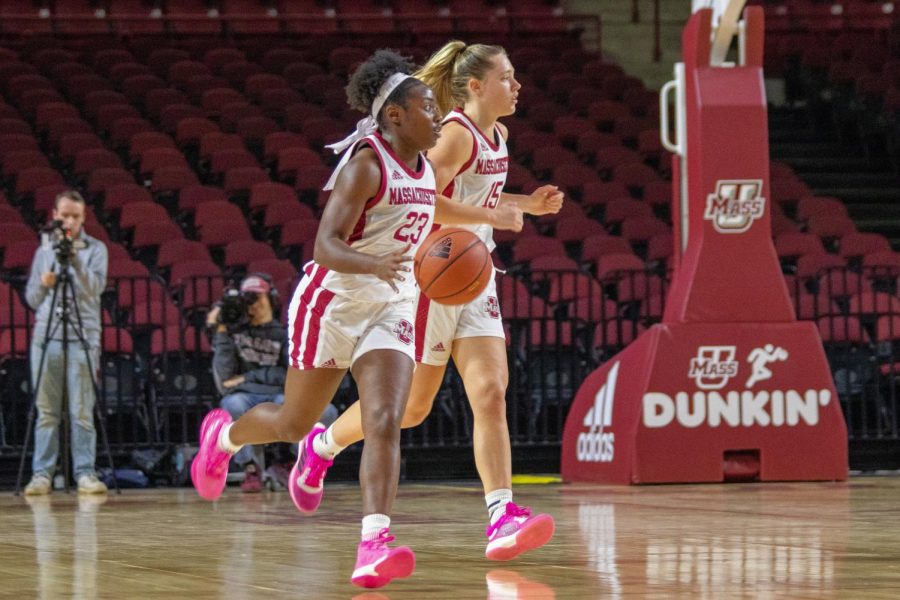 In 2016-2017, coach Tory Verdi’s first year in charge of the Massachusetts women’s basketball team, the Minutewomen finished 9-21 while starting walk-ons throughout the Atlantic 10 schedule. Two years later, the Minutewomen went 16-16 and won in the first round of the A-10 tournament.

Everything has been gearing up for year four.

UMass hired Verdi in April of 2016. At the time, it was a program in shambles hoping to slowly dig itself out of the depths of the A-10. So far, Verdi has delivered, with consistent improvements and a talented roster that shows promise for the 2019-2020 season.

Finishing 16-16 last year  and reaching the .500 mark was a major milestone for a program that has been known as a bottom feeder for years. It sets the bar high for the 2019-2020 season for the Minutewomen.

In order to rebuild the program, Verdi had to put together a roster with the foundation to be perennially competitive. Sophomore guard Destiney Philoxy is arguably the centerpiece to this foundation, as she is usually the go-to option on offense. Philoxy was on the A-10 All-Rookie team last season, and she’s a consistent matchup problem for defenses. Her ability to finish through contact and knock down 3-point shots makes her a versatile offensive threat.

“She’s a dynamic scoring guard who can score it at all three levels,” Verdi said.  “Defensively, she’s really hard to scout and defend because she can put the ball on the floor and create for herself and everyone else. She gets you into rotation because she’s so quick. She’s our catalyst.”

Verdi has also mentioned senior guard Vashnie Perry as the team’s other “catalyst”. In 15 games last season, Perry averaged 6.0 points, 1.8 rebounds and 1.6 assists per game. She has the talent to score and defend the perimeter on a high level. However, inconsistent perimeter shooting presents an area that could hold her back.

Junior Paige McCormick is another crucial piece to the puzzle for the Minutewomen. McCormick saw a bit of a dip in her production last season, as she averaged 2.8 points and 1.6 rebounds in 10.3 minutes per game. Despite that lack of production, McCormick is still viewed as a core piece to the team.

At 5-foot-11, McCormick has spent most of her college career playing guard. This season, Verdi raised the possibility of experimenting with her at forward as well.

“I just want to be somebody that the team can count on. I always want to be uplifting them and be a great teammate. That’s my goal,” McCormick said. “I’m really excited to play in the post because it just gives us so many options on the offensive end that we haven’t had before.”

Senior captain Hailey Leidel may be the biggest name on this roster. After the 2016-2017 season, she was voted onto the A-10 All-Rookie team and named Rookie of the Year. Leidel saw a drop in her production last season as well, but she still averaged 13.2 points per game while shooting 37.4 percent from the floor. Along with graduated senior Jessica George, Leidel, serving as a captain, led UMass to the quarterfinals of the A-10 tournament.

Leidel’s play this season may determine just how far the Minutewomen can go after she showed some uncharacteristic inconsistencies and inefficiency last season. It’d be a huge boost for UMass if Leidel consistently plays on the elite level that she’s proven capable of.

As far as new additions to the team go, freshman center Maeve Donnelly is the kind of recruit that Verdi has looked for. At 6-foot 5-inches, Donnelly has the length and athleticism to be an elite post presence on offense and rim protector on defense. The Minutewomen have lacked a formidable presence on the interior for years, and they have hope that adding Donnelly will open up a traditionally guard-heavy offense.

“There’s definitely a lot of pressure, but my teammates make me feel like I can honestly accomplish whatever I want to,” Donnelly said. “Even though it’s a lot of pressure, I’m really excited about what I can do with this opportunity.”

While there are some questions to be answered about, the Minutewomen know they have two reliable assets coming off the bench in freshman forward Angelique Ngalakulondi and junior guard Bre Hampton-Bey. Ngalakulondi was the 2018 New Hampshire Gatorade Player of the Year in high school, a physical rebounder and finisher in the paint.

Hampton-Bey has been an energetic two-way player for UMass and she looks to continue to play that role this season. She was named to the A-10 All-Rookie team in 2017-2018 and continued to impress as a sophomore. Last season, she averaged 8.3 points, four rebounds, and 2.5 assists per game.

“I do like to pride myself on my energy,” Hampton-Bey said. “Especially on defense, I like getting on my teammates and staying on them at all times so we can all be on the same page. That’s something I love to bring and my team needs that from me. I just love being that role player that brings a lot of energy and keeps everyone on their toes.”

The Minutewomen had a good warmup in for their season during an exhibition against UMass Dartmouth on Oct. 28. It was a dominant showing, as guards Philoxy and Perry put up a combined 43 points. Donnelly was also impressive recording seven points, 12 rebounds, nine blocks and three steals.

Opening night at Mullins Center presented much more of a challenge for the Minutewomen, as they fell to Merrimack 79-64. UMass was overly stagnant on offense and dreadful from 3-point range, shooting just 23.5 percent. McCormick was one of few silver linings for the team, with 17 points and eight rebounds, shooting 8-of-17 from the field.

While the 0-2 start is disappointing, the Minutewomen have made some encouraging progress. UMass played a much more complete game against Providence as its defensive intensity was noticeably sharper.

The main issues lie on the offensive end as the Minutewomen have yet to find any kind of consistency outside of Philoxy’s abilities. The Minutewomen have shot an abysmal 19 percent from deep to start off the season. This level of offensive efficiency needs to improve for UMass to take the next step, and veterans like Leidel and Perry need to step up to help the cause. This team has a lot of potential, but they’ll only go as far as the leaders take them.