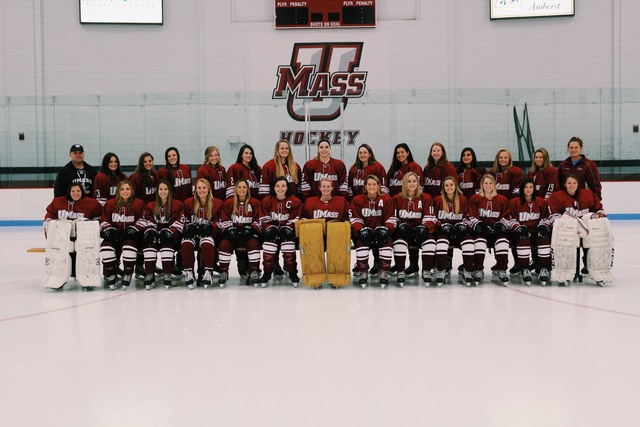 Despite a slow start, UMass (4-5) held on to a 2-1 lead at the end of the second period when senior Juliana Dolan found the back of the Express’s net just before the clock expired.

The Minutewomen came out aggressively right at the start of the third period, similarly to how they started in the second. While UMass generated some great opportunities early on, Walpole’s defense and goaltending frustrated the Minutewomen’s offense, who failed to score for the whole third period.

The Express broke it open with 10:45 left in the third when Meghan Gambino scored on a breakaway, tying the game up 2-2. Just 30 seconds later, Walpole’s offense set up a 2-on-1 and Anya Nichipor scored to swing momentum for her team, putting her team up 3-2. Gambino and Nichipor each had two goals, all coming in the third period.

“We came out in the third hoping for good things,” coach Bill Wright said. “Couple odd man rushes and we’re right behind the eight ball again.”

UMass did have hope with 4:18 left in the third when the Express were charged with a penalty, but the Minutewomen failed to capitalize on the power play. Walpole shut the door on a UMass comeback when Gambino scored again with 2:00 minutes left. An empty netter made the final score 5-2 in favor of Walpole.

“We came out soft in the first period, thinking it was going to be an easy game against a younger, junior team,” Wright said. “It kind of blew up in our face.”

UMass started out the game with a slashing penalty, putting their backs against the wall early. After killing the penalty, the Minutewomen didn’t waste any time scoring when sophomore Marissa Gregory put them up 1-0. UMass goalie Melissa Strauss was able to maintain her composure when faced with immediate pressure.

“It always feels great to keep as many pucks out of the net and keep them in the game” Strauss said.

Strauss held Walpole scoreless, but the offense continued to struggle to move the puck out of the zone and eventually let up a score by Catrina Chinetti off an Express face-off with 6:25 left in the first.

Walpole accumulated more than doubled the amount of shots on net compared to the Minutewomen, beating them in the shot category 15 to six. Strauss said they played this same team in the preseason and lost 1-0 but didn’t play their starters.

“I think in the first period we came out slow. We didn’t really expect much out of this team, but that was wrong by us,” said Dolan. “I think for high schoolers they played very maturely.”

The Express didn’t seem to be rattled by the pressure of UMass’s energetic attack, allowing only one goal through the first two periods. Walpole’s goalie saved 33 shots and the defense deflected many passes, pestering the Minutewomen’s offense all game.

“They had sticks in the lanes, had good body position on us, and they executed when they had the opportunity on their odd man rushes,” said Wright.

The Minutewomen will look to bounce back from this loss when they play Boston University at home Saturday, November 16th, at 9:30 AM.